Naivasha market to offer jobs to over 1,000 traders

Facility to be ready by June. 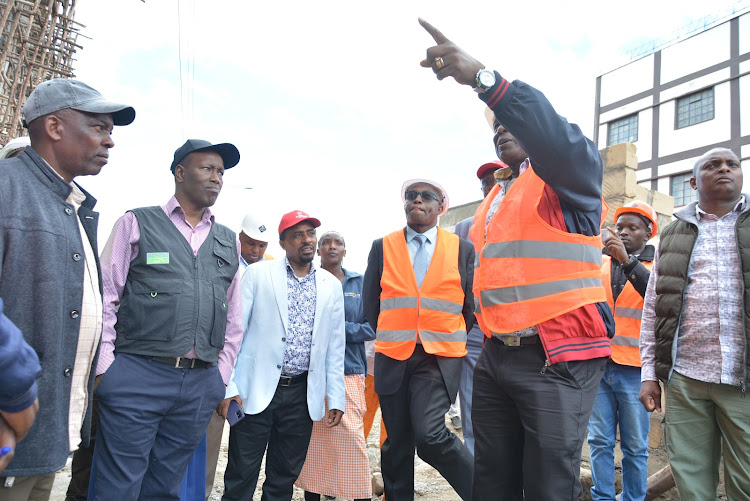 Market Nakuru Governor Lee Kinyanjui (in black cap) joins senior officers from the county in supervising works on the Sh400m Naivasha wholesale market. Once complete in two months, the market will offer job opportunities to over 1,000 traders.
Image: George Murage

The Sh400m Naivasha wholesale market that will be ready in two months will offer direct job opportunities to over 1,000 traders.

The facility located within Naivasha town will also offer a market for fresh produce from the nearby county of Nyandarua.

The market that is in the second and final phase is expected to reduce wastage by over 80 percent by providing cold stores for the traders.

According to Nakuru Governor Lee Kinyanjui, his government was currently constructing twenty markets across the county as a way of supporting the farmers and traders.

He noted that for years, the traders had suffered after working under scorching sun and rain, noting that this would change in the coming months.

“This will be a centre of human activity and its part of uplifting the traders who have worked in hard circumstances,” he said.

Speaking after visiting the facility, Kinyanjui noted that for years farmers from Naivasha and the nearby Nyandarua County had suffered due to lack of market.

“In the past, we have had massive wastage due to poor storage services but this will now be fully addressed,” he said.

The vice-chair of Naivasha Municipal board Peninnah Muigai noted that the old market hosted around 400 traders but the numbers would rise to 1,000.

She said that they were working on how and where each product would be sold as one way of making the market easily accessible.

“This market will be complete by June thus opening its door to 1,000 traders who previously worked in the open,” she said.

Lakeview MCA Simon Wanyoike was full of praise for the county, noting that the market would change the fortunes of area traders.

He however challenged the county to make sure that the traders who were earlier relocated to pave for the market were the first beneficiaries.

“We hope that all the traders who were relocated ahead of this project will be the first to get stalls in this wholesale market,” he said.

One of the traders and area leaders Eunice Mureithi who worked in the market said that the facility would offer job opportunities to tens of residents.

“We used to work under harsh weather and our products were exposed to theft but this will now change,” she said.