•This translates to more than 10,000 jobs that are on the line, the Kenya International Freight and Warehousing Association ( KIFWA) notes.

•Global shipping lines using the Port of Mombasa are now incorporating clearing and forwarding services within their freight packages. 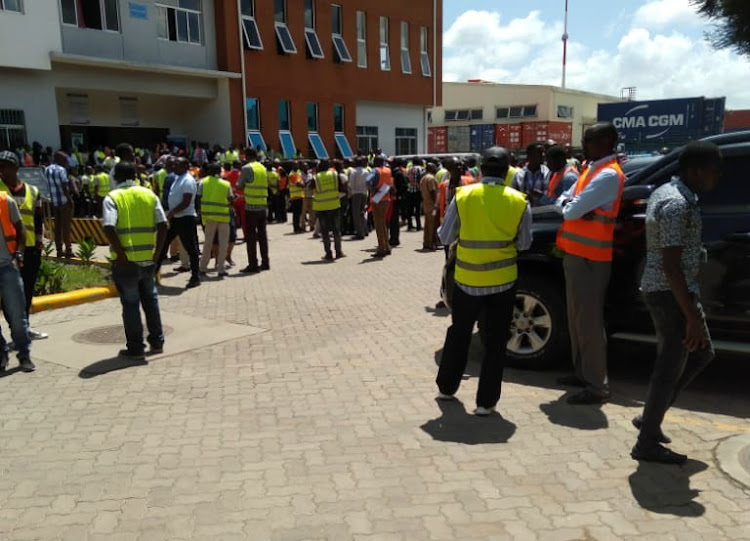 Clearing agents during a past demonstration on the free container storage period, outside one of Nairobi ICD administration blocks/FILE

More than 1,000 Kenyan based clearing and forwarding firms could close in the wake of a takeover  by international shipping lines, players in the sector warn.

This puts slightly over 10,000 jobs on the line where on average, a clearing firm employees at least 10 people according to the Kenya International Freight and Warehousing Association.

There has been an aggressive move by global shipping lines docking in Mombasa to incorporate clearing and forwarding services within their freight packages, threatening to push out small local players.

This is a strategy that allows a company to streamline its operations by taking direct ownership of various stages of its production process rather than relying on external contractors or suppliers.

“This will see shipping lines control the entire supply chain,” SCEA chief executive Gilbert Langat said in a telephone interview with the Star, “Some players might find themselves playing third fiddle, they will have nothing to do.”

He said that while clearing agents are raising genuine fears and concerns the move by shipping lines will improve efficiency.

By international maritime players accessing local logistics environment through acquisitions of freight forwarding, warehousing, port facility operators and transport, there may be a benefit of skills and technology transfer and international best practice, Langat notes.

However, the flip side is the uncompetitive practices by some who offer preferential rates, priority and customer information that can be misused for market access.

"The Maritime regulators should have very effective regulations to prevent this with Competition Authority setting clear guidelines on ownership. Local content, staffing mix and negotiated rates to prevent under cutting and also prevent uncompetitive practices," he said.

There are at least 1,200 major clearing and forwarding companies in Kenya under Kifwa.

“What they are simply doing is killing local companies,” Kifwa national chairman Roy Mwanthi said, adding that shipping lines have started denying importers space on their vessels if they don't procure end-to-end services.

The latest development comes about seven years after efforts to block foreign-owned shipping lines from expanding their offering beyond cargo haulage was overturned by the court.

A ruling by the High Court in Mombasa in January 2015 rendered section 16(1) of the Merchant Shipping Act, 2009 ineffective, denying Kenya Maritime Authority(KMA) and Kenya Ports Authority powers to block shipping lines from engaging in other businesses.

According to the section, No owner of a ship or person providing the service of a shipping line was to either directly or indirectly, provide in the maritime industry the service of crewing agencies, pilotage, clearing and forwarding agent, port facility operator, shipping agent, terminal operator and container freight station.

A big player in Kenya and East Africa’s logistics space, the company has presence in 42 ports.

MSC, which this year unseated Maersk as the world's largest shipping line, by container capacity,is also keen to increase its shareholding in the Kenya National Shipping Line (KNSL) which will give it control of the entity.

Control of clearing and forwarding business by shipping lines will deal a final blow to local firms which have been struggling since the introduction of mandatory evacuation of cargo by the Standard Gauge Railway(SGR) to Nairobi, in August 2019.

According to Kifwa, more than 70 per cent of clearing and forwarding businesses have since shifted bases to Nairobi, a move that came with job losses at the coastal town.

“There is nothing much left to do in Mombasa. Basically, this town is slowly being deserted,” Mwanthi told the Star.

After the introduction of the SGR and cargo clearing directives, a study by the University of Nairobi-School of Business, showed that Mombasa’s economy would shrink by 16.1 per cent on the short-term, with about 8,111 jobs at stake.

This was if all cargo is evacuated by the SGR from the port, the study published on September 13, 2019 indicates.

Most of these jobs were in road transport, clearing and forwarding and Container Freight Stations (CFSs).

KHALID: Coast will only elect leaders who will revive port business

Through ill-informed and discriminative policies, port operations have been moved to the inland depot
Siasa
1 year ago

Kenya has been keen to have her neighbour use its new infrastructure.
Business
10 months ago
WATCH: The biggest news in African Business
Post a comment
WATCH: The latest videos from the Star
by MARTIN MWITA Business Writer
Kenya
05 May 2022 - 04:00
Read The E-Paper