IRA has placed it under statutory management.

•The company has been facing a number of challenges particularly relating to its ability to meet its obligations and mitigate its inherent risks.

It is not able to settle claims to the detriment of claimants, policyholders and its creditors, IRA says. 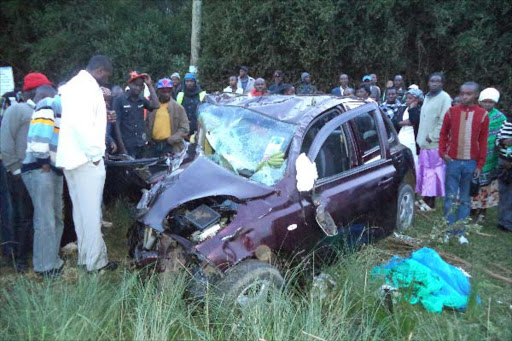 FAKE LUXURY?: Wreckage of a car at an accident scene
Image: FILE

A flopped buyout deal has driven Resolution Insurance into statutory management, as the troubles in the insurance sector boil over.

The Insurance Regulatory Authority (IRA)on Monday appointed the Policyholders Compensation Fund (PCF) as the statutory manager which will ensure among others, the company assets and records are preserved for the benefit of policyholders, claimants and other stakeholders.

It adds to the growing list of companies under statutory management among the Concord, Standard Assurance, Blueshield, United Insurance Company.

UK-based global insurance solutions provider–Linkham Group had in February last year made a move for a majority stake in Resolution Insurance.

The process however dragged in what insiders say was occasioned by findings on poor management and misappropriation of funds, as the firm carried out due diligence.

Its capital had been depleted which saw it struggle to pay claims.

The firm has since gone down with Sh4.1 billion in Gross Written Premiums, as at December 2021, IRA quarter 4, 2021 data shows.

The highest contributor was medical with around Sh3.6 billion.

Direct premiums written represents the premiums on all policies the company's insurance subsidiaries have issued during the year.

The firm which had an underwriting loss of Sh457.3 million incurred claims amounting to Sh1.6 billion in general insurance business for the quarter ended December.

According to IRA, the company has been facing a number of challenges particularly relating to its ability to meet its obligations and mitigate its inherent risks.

“Despite the various intervention measures , Resolution Insurance has continued to slide into operational and financial difficulties,” IRA chief executive Godfrey Kiptum said in a statement.

In particular, the company is not able to settle claims to the detriment of claimants, policyholders and its creditors.

Among the most recent casualties is the Embassy of Chile in Nairobi which recently wrote to the firm seeking a refund of services not rendered.

There have been other complaints and concerns by a section of the public over rejection of its medical covers by a number of health facilities.

The insurer is also not able to comply with statutory requirements relating to capital adequacy, submission of returns and governance structures, IRA said.

IRA has previously had numerous engagements with the insurers’ management and board to seek solutions to salvage the company.

It has also considered various initiatives undertaken by the shareholders to inject capital into the company.

“Unfortunately, all these measures have not been successful,” Kiptum said, “Having considered the continued high risk and consumer exposure posed by the insurer, the authority has, in the best interest of the public, placed Resolution Insurance Company Limited under Statutory Management as provided for under Section 67 C (2) (i) of the Insurance Act.”

This decision is in furtherance of the authority’s commitment to ensure that policyholders and insurance beneficiaries are protected, IRA notes.

It has appointed the Policyholders Compensation Fund (PCF) as the statutory manager which will ensure among others, the company assets and records are preserved for the benefit of policyholders, claimants and other stakeholders.

PCF has declared a moratorium on the payments by the insurer to its policy holders and all other creditors for a period of 12 months, effective April 5. All policies cease to exist.

PCF will initiate the process of compensating policyholder claims within the next 14 days. Resolution Insurance is henceforth not authorised to transact any new insurance business.

The insurance firm was founded by businessman Peter Nduati in 2002 as Resolution Health, a medical insurance provider in Kenya.

It changed its name to Resolution Insurance in 2013 as it expanded into the region, a time when Nduati sold his business.

“I am no-longer part of the business. Sold it a long time back,” Nduati confirmed to the Star.

The Consumer Federation of Kenya (Cofek) has since raised concerns over over what it terms "rot" in the insurance sector, where underwriters are said to be shortchanging policyholders.

Company in the process of completing an acquisition deal. .
Business
10 months ago
WATCH: The biggest news in African Business
Post a comment
WATCH: The latest videos from the Star
by MARTIN MWITA Business Writer
Kenya
07 April 2022 - 04:00
Read The E-Paper