•Its lease liabilities raised from 1.1 billion from Sh4.8 billion the previous year. 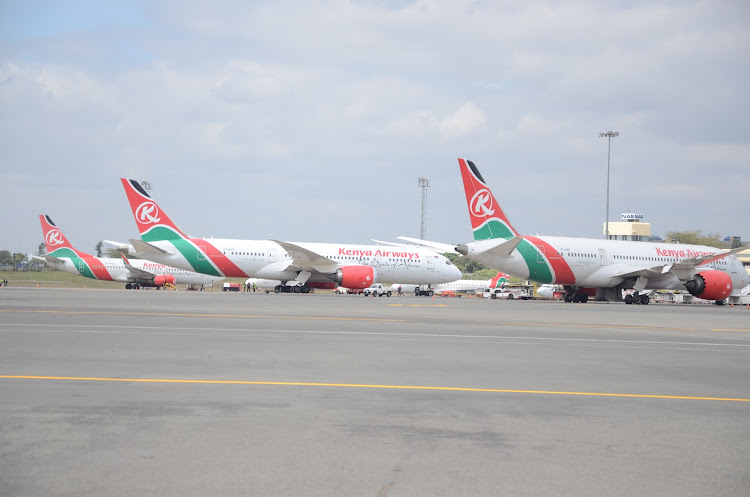 Kenya Airways has narrowed its losses to Sh15.8 billion for the year ended December 2021, driven by cut in expenditure among them the renegotiated aircraft lease payments.

This is from the Sh36.2 billion, the worst in history, reported in 2020 when the Covid-19 pandemic took a toll on the aviation industry.

This would have been higher, management says, were it not been restricted in the fourth quarter due to the Omicron variant and the ban and flights into the UAE.

The group uplifted 2.2 million passengers during the year, a 25 per cent increased compared to the prior year, but 57 per cent lower than 2019.

The cargo business uplifted 63,726 tonnes recording an improvement of 21 per cent over 2020.

During 2021, the airline still felt the impact of Covid-19 pandemic due to some restrictions and limitation on routes which affected routes such Dubai and Guangzhou.

The resumption of travel operations in 2021 however increased KQ's airline capacity by 11.5 per cent , but remained 65 per cent below the 2019 pre- pandemic levels.

Its lease liabilities decreased to Sh1.1 billion from Sh4.9 billion the previous year.

KQ, as it is known by its international code, reduced its operating cost to Sh6.8 billion from 2020's Sh27.1 billion. This translates to an operating margin of 9.6 per cent compared to 51 per cent in 2020.

"This is a testament to the tremendous work that the management is doing to improve revenue, contain costs and conserve cash," chairman Michael Joseph said.

The airline has been putting in place a number of measures in the last two years to remain afloat, among downsizing on staff.

KQ has failed to record a profit since 2014 and the losses have compounded the huge debts the airline took on to buy a fleet of new Boeing planes, pushing it into negative equity territory.

Its total assets are currently valued at Sh155.5 billion against a total liability (non-current and current liabilities) of Sh157.9 billion.

KQ now depends on the government for bail out.

Last year, the National Treasury committed to bailing out the airline after shelving plans to nationalise it.

According to a plan presented to the International Monetary Fund (IMF) last year, the exchequer said it was helping the airline source for reputable consultants to come up with a viable turnaround plan.

The Kenyan government agreed to assume $827.4 million of KQ's debt and provide financial support in FY2022 and FY2023.

In February, KQ said it will for the second time work with Seabury Consulting, a subsidiary of professional services giant Accenture to reorganise the company.

The consultancy firm will spearhead Kenya Airways' debt restructuring, which is estimated to cost upwards of $1 billion.

Despite criticism, there are numerous reasons why patriotic Kenyans should support the plan
Opinion
8 months ago

Nairobi-Kisumu flights will be scaled down from 26 times to 17 times weekly.
Business
8 months ago

The carrier has a 36-aircraft fleet, 19 of which it wholly owns while the rest are leased
Business
9 months ago
Post a comment
WATCH: The latest videos from the Star
by SHARON MAOMBO Business Writer
Kenya
30 March 2022 - 06:00
Read The E-Paper