Inside India's plan to grow trade, investment with Kenya

It is the second top import source, in value, for Kenya after China.

•There are over 60 major Indian companies that have invested in various sectors in Kenya. 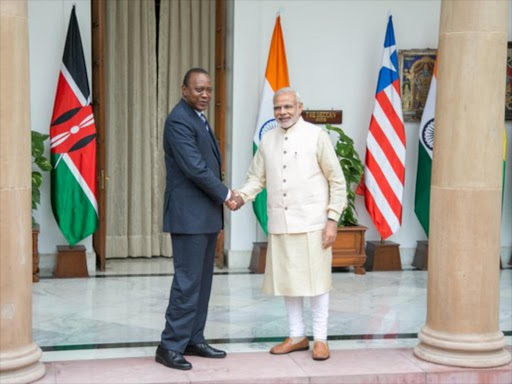 India is keen to tap more trade and investment opportunities with Kenya, its High Commission in Nairobi now says.

This, as it remains the second biggest import source for the East African Community nation, after China.

“We are looking at growing the bilateral trade, drive investments both into Kenya and India and create a conducive environment for Kenyans to do business in India,” High Commissioner Virander Paul said.

He spoke during the inaugural East FM’s “High Table with the High Commissioner” show recorded on Friday.

According to Virander, there are huge potential in agro-processing and value addition that is yet to be exploited in Kenya, with potential for Kenyan industries and MSMEs to tap the Indian market.

Kenya and India have had a long-standing bilateral relation.

According to the High Commission, the contemporary ties between India and Kenya have now evolved into a robust and multi-faceted partnership, marked by regular high-level visits, increasing trade and investment as well as extensive people to people contacts.

When India's Prime Minister Narendra Modi visited Kenya in July 2016, it was propulsion of the long-standing trade and commercial ties between the two countries.

They witnessed signing of seven MoUs in the fields of defence, trade and developmental assistance.

The PM handed over 30 field ambulances for the use of the Kenya Defence Forces.

Five business-to-business MoUs were signed on the side-lines of the business event.

Both leaders visited the ‘India Innovation Pavilion’ and released a booklet on ‘Doing Business in Kenya’. PM addressed a gathering of over 20,000 Indian community members in Nairobi.

Significantly, President Kenyatta joined him during the diaspora interaction. PM delivered a special lecture to a large gathering of students at the University of Nairobi and visited United Nations Office at Nairobi.

India announced gifting of a state-of-the-art made in India cancer therapy machine – Bhabhatron II – to Kenyatta National Hospital, grant of $ 1 million (Sh113.7 million)for the refurbishment of the Mahatma Gandhi graduate library of the University of Nairobi and holding of the first ever Festival of India in Kenya.

About six months later, President Uhuru flew to India on a three-day state visit on an invitation extended by PM Modi.

During the visit, the two leaders held official talks in New Delhi.

The President was accompanied by several ministers, senior officials and a high-level business delegation.

MoU on Cooperation in the agriculture sector and allied sector and LoC for $100 million for agricultural mechanization was signed during the visit.

India is the second largest investor in Kenya, according to the Kenya Investment Authority (KenInvest).

There are over 60 major Indian companies that have invested in various sectors including manufacturing, real estate, pharmaceuticals, telecom, Information Technology, banking and agro-based industries.

Indian investments have resulted in creation of thousands of direct jobs to Kenyans with pharmaceutical companies having a substantial presence in Kenya.

A bilateral Double Taxation Avoidance Agreement (DTAA) was signed in 1989 with a revised DTAA signed in July 2016 and came into force on 30 August 2017, easing FDIs.

The value of trade between Kenya and its key business partners dropped by 4.7 per cent in 2020 as a result of disruption occasioned by the pandemic.

On the contrary, that of Kenya-India grew, Kenya National Bureau of Statistics 2020 data shows.

India which is the second import source for Kenya saw the value of imports grow by 5.4 per cent to Sh188.6 billion.

This was up from Sh178.9 billion the previous year, driven by increase in pharmaceutical imports during the pandemic, where India remains a key source.

Last year, the value of exports to India was Sh208.1 billion for the 11 months to November, officla government data shows.

This, as Kenya's domestic exports grew by 17 per cent in the 11 months to November, driven by food commodities, fresh produce and manufactured goods.

On the other hand, Kenyan exports to India include soda ash, vegetables, tea, leather and metal scrap.

Close collaborations between the Kenyan National Chamber of Commerce and Industry and its Indian counterpart, together with other private sector bodies and governments is expected to drive trade and investment between the two countries to new heights, with both economies angling to bounce back from the pandemic.

“We expect G2G (government to government), B2B and Private sector to Private sector meetings to continue as we built stronger bilateral ties between the two countries,” Commissioner Virander told the Star.