The government is in the final preparatory stages for the official engagement with each of the Independent Power Producers in a bid to drastically cut the cost of power. https://bit.ly/3IqbhDj 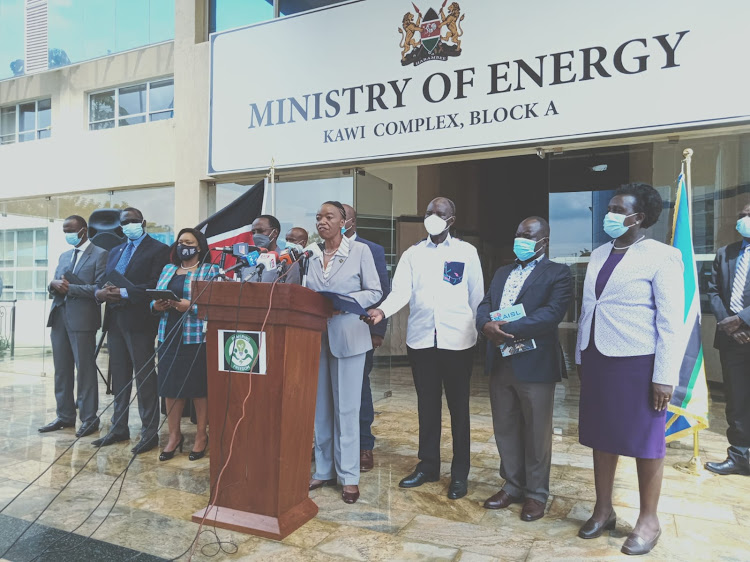 Energy CS Monica Juma address a press conference at KAWI House in Nairobi on January 21, on the reforms being undertaken in the power sector
Image: FREDRICK OMONDI

The government is in the final preparatory stages for the official engagement with each of the Independent Power Producers in a bid to drastically cut the cost of power.

Energy Cabinet Secretary Monica Juma revealed this at a press interview yesterday in Nairobi, admitting that some of the existing contractual agreements are hugely in favour of IPPs.

''I am pleased to note that IPPS not only headed by call but have engaged with us in listening sessions that have outlined a number of areas of interest,'' Juma said.

She added that the engagements have been constructive and many have offered pointers that are invaluable towards our objective of making our power competitive, stable and accessible.

Last year, President Uhuru Kenyatta was forced to set up a task force to look into Kenya Power's books after persistent losses amid corruption allegations.

The task force's report revealed that the country pays Sh31 more per dollar for a deal entered when the US currency was trading at Sh72 in 2001.

According to Kenya Power's annual report 2020, the company spent a total of Sh93.9 billion on fuel and non-fuel produced power, with units coming from IPPs being more expensive.

This is way above the Sh5.48 per unit bought from KenGen, which remains the biggest supplier accounting for 48.1 per cent of the monies paid to producers.

Yesterday, Juma has exuded confidence that the ongoing reforms to reduce the cost of electricity in the country will yield more results once completed.

''Having looked at the contractual documents of the various engagements, I strongly believe that there is room for improvement that will enable us to benefit,'' Juma said.

She added that from the analysis done, the end of the process will provide a robust framework that ensures risks are more evenly distributed, resulting in better balanced and more sustainable commercial arrangements.

The Energy CS said the government is working on a plan to further reduce the cost of electricity in the country with the next reduction set to be effected before April.

On January 7, the government announced a 15 per cent reduction in power tariffs.

The cut was part of a 30 per cent tariff cut pledge made by President Uhuru Kenyatta to help ease the economic burden faced by Kenyans.

“I want to assure all Kenyans that we are determined to see these reforms through and are focused to make clean, affordable and accessible energy a reality for all Kenyans,” she said.

She added that her ministry has started a policy roadmap that will culminate in the Energy White Paper that will help the country progressively realize the dream of reduced power cost.

After the presser, Juma led senior officials in her ministry to inspect repair work at the vandalized line in Imara Daima.

On January 11, 2022, the Suswa- Embakasi line experienced technical faults and affected major areas of the country

Kenya Power said it could take up to two weeks for the towers to be brought back up.