Meet Kenyan mixologist who has redefined the cocktail industry

He turned down a job offer in a cruise ship and an opportunity to work in Dubai.

•Sales cocktails for as low as Sh150. 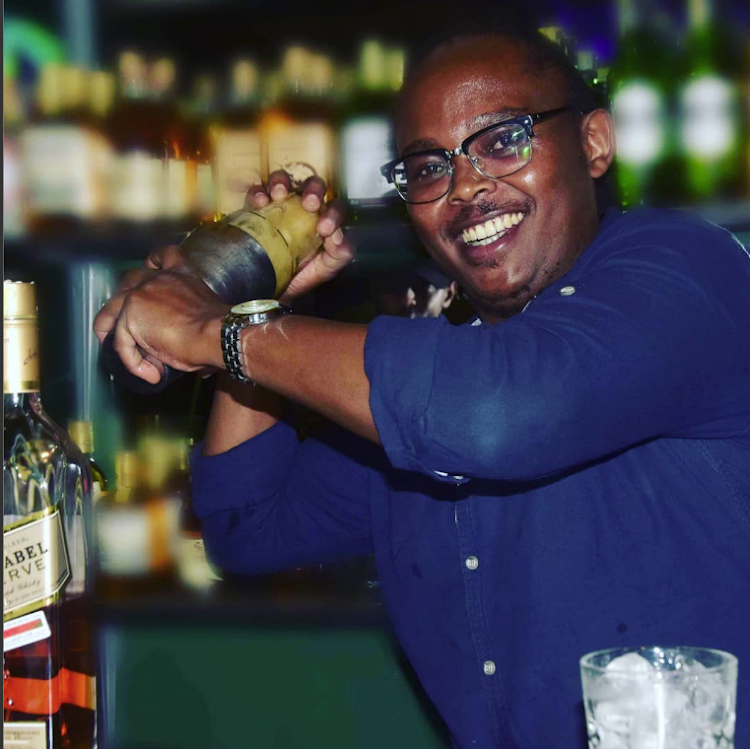 Scholar Patrick Witz once said: “Everyone has a dream, so why not dream big.”

These words define Samuel Nguyo’s journey, a Nairobi-based bartender by profession, with 17 years of experience in the industry.

He once declined a job in a cruise ship and another opportunity to work in Dubai.

Growing up, the 37 years old humble and down-to-earth entrepreneur wanted to become a priest.

This however changed after finishing high school. He decided to “serve” in a different way; the hospitality industry.

“I realised priesthood was not for me so I opted for something different,” Nguyo says with a smile on his face.

Fresh from school, in 2005, he got a job as a steward at Mercury ABC Place, along Waiyaki Way, Nairobi.

It was a humble beginning of washing utensils, cleaning the bar, and scrubbing toilets.

This is the place where he fell in love with mixology.

Unlike today where one can acquire skills through tutorials on the internet, Nguyo learned the art on the job.

He started training in the kitchen before giving the bar a try.

He would get to work at least two hours before his shift, a time he used to practice the art of mixing, but not with the bar stock but water.

“I loved how the bartenders would pour the drinks from bottles and do the mixing,” Nguyo explains.

One day, the director found him at the counter with bottles of water imitating the bartenders.

As a steward, he was not supposed to be there and with the director walking on to him, Nguyo knew he was in trouble.

However, contrary to his expectation, the director instead asked the senior bartenders to train him in the art of mixing.

“The director saw my interest and gave me an opportunity. He asked some of the best mixologists who were there, and are still in the industry, to train me” he recalls.

His passion saw him perfect the art in three weeks’ time.

As a training bartender, his first-ever cocktail he made was for the director’s wife, a strawberry margarita.

“She was really fascinated and asked me to be making her cocktails,” he remembers.

With his Sh8, 000 salary, Nguyo would spend part of the money in an Internet café

to learn more about cocktail making.

Within three months, he was promoted to a full-time bartender.

He worked at Mercury ABC place for three years where he rose to head bartender, leading a team of four.

He got another opportunity at a boutique bar at the Tribe Hotel, Village Market, where he rose from a bartender to a bar supervisor.

He had turned down the two offers; a job in Dubai and another in a cruise ship, which had come through references by clients he had served in Nairobi.

“I am not a fan of the deep waters nor being far away from home so that is why I never took up the two opportunities. If it is something I can do here at home, I don’t see why I should travel very far to do it,” Nguyo explains.

Three years later, Nguyo was poached by his former employer who had opened a second branch; Mercury Junction Mall.

He worked there as a bar supervisor before being promoted to bar manager.

After a total of nine years working in the bars, Nguyo felt he had gained enough experience to venture into his own business.

His entrepreneurship passion saw him join hands with four friends to start making and supplying ice cubes, a key component in cocktail making.

Together, they invested half a million into importing a commercial icemaker.

They would supply parties, hotels, and bars in Nairobi, mainly Westlands area which was then the city’s entertainment hub.

They also opened a wines and spirits shop in Roysambu, a vibrant and lively Nairobi estate.

The partnership would however not last long and after two years, his friends pulled out of the business.

It is then that he decided to start making cocktails at the estate-based wines and spirits.

His first cocktail at the estate was a Mojito, which ended up being his bar’s name today.

“I made a cocktail for a customer at the wines and spirit. After drinking it, he called his friends to come and try it out. I sold ten cocktails that day. I was very motivated and that was the beginning of my journey into full-time cocktail making as an individual,” he recalls.

Nguyo opened a cocktail bar, “The Bar Chef Mojitos Cocktail Lounge” in Roysambu. It is the 13th top-rated Bars and Pubs in Thika, by TopRated.Online.

He has since changed the belief that cocktail is a high-end clubs thing.

While cocktails average between Sh700 and Sh1,500 in top hotels and bars in the city, Mojitos makes cocktails for as low as Sh150 using low-budget ingredients. A classic cocktail with Johny Walker Black goes for Sh550.

It has built a big following in Nairobi with clients coming as far as Ngong and Thika.

Roysambu residents have also fallen in love with the place which is now seven years old and one of the famous places at the estate. 80 per cent of sales at the premise come from cocktails.

Nguyo has had his fair share of challenges including financial difficulties through the journey, and the Covid-19 pandemic, which brought the hospitality industry to its knees.

He has however lived to become one of the greatest bartenders competing in different cocktail-making challenges in the country among them the Sky Vodka mixologist challenge where he was the first runner-up and the CÎROC taste challenge.

His biggest moment was however in 2017 when his cocktail won the hearts of judges at the prestigious Diageo World Class cocktail competition–the Oscars of bartending, in Nairobi.

He was among the six finalists from a pool of 70 participants, with his cocktail winning the “Heat Of the Moment” award. This is the judges’ choice.

It gave him an opportunity to join the Diageo Bar Academy, in 2018, which focuses

Today, he is a trainer with Diageo Bar Academy in Kenya where he has inspired upcoming bartenders in Nairobi and other major towns in the country.

His business which was hard-hit by the Covid-19 pandemic, which saw him close for several months, is now slowly picking and he is hoping things will be better to allow him to create more jobs.

To aspiring bartenders, Nguyo says: “The ground is now level. We have bartending schools that I never had an opportunity of attending when I started. The Internet is also more accessible. Take advantage of these to sharpen your skills and improve your career.”