Uhuru to leave less than Sh200bn borrowing room for next government

PBO report shows the country’s debt will be Sh8.8 trillion by the time the incumbent leaves office 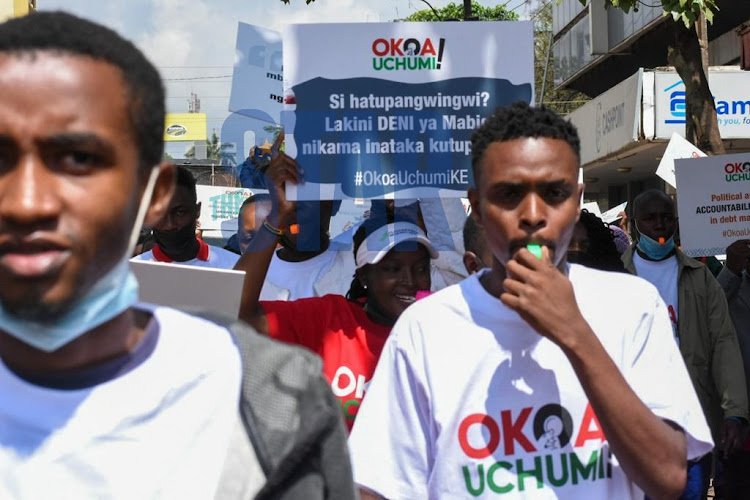 Members of the public together with OKOA Uchumi conveners lift placards with different information outside the National Treasury house during a peaceful demonstration on December 9, 2021.
Image: MERCY MUMO

The government to be formed after next year's general elections will have no leg room for borrowing, with less than Sh200 billion left to hit the Sh9.1 trillion ceiling.

''The stock of public debt continues to increase and with it, the level of macroeconomic effort required to maintain debt at sustainable levels,'' the PBO report reads in part.

It is composed of Domestic Debt (48 percent) and External debt (52 per cent).

At the current level, debt stock accounts for 88.8 per cent of the  Sh9 trillion PFM Debt Ceiling (Sh9 trillion) and has a Present Value(PV) of Public Debt-to-GDP ratio of 64.2 (against a threshold of 55).

The debt stock is forecasted to cross the Sh10 trillion mark by the end of 2024.

According to the budgetary office, the 10 per cent economic growth rate target under the Vision 2030 Economic Pillar should therefore be considered as a critical factor in debt management.

''Against a ceiling of Sh9 trillion, this illustrates the insufficiency of fiscal space to finance the fiscal deficits for FY 2022/23 (Sh846 billion) and the rest of the medium term,'' the report says.

It adds that without the amendment of the debt ceiling and adherence to the fiscal consolidation path - the fiscal policy will have to be implemented under an increasingly constrained fiscal environment and the desired outcomes may not be achieved.

The fiscal deficit, which facilitates the accrual of public debt, is estimated to persist but declines into the medium term. It is expected to hit Sh846 billion in FY 2022/23 and decline to Sh675 billion by the end of the medium term.

Domestic debt risk characteristics continue to worsen and the overall risk profile of the stock of debt is dependent on favorable external debt risk profile.

Between June 2020 to June 2021 Weighted Average Interest Rate (WAIR) of the debt portfolio improved from 9.1 per cent to 6.9 per cent.

This was on account of concessional financing for external borrowing that reduced the external debt stock WAIR from 3.1 per cent to 2.9 per cent thus keeping interest rate risk exposure on the downside.

Domestic debt WAIR, on the other hand, increased from 10.9 per cent to 11.1 per cent indicating a rising cost of borrowing from the domestic market and any given strategy based on domestic market financing will have an incremental impact on total debt interest servicing.

For the total debt portfolio, the proportion of debt to be refixed in one year improved, from 27.1 per cent to 25.4 per cent while the average time to re-fixing fell marginally from 8.4 years to 8.3 years.

The percentage of total debt on fixed-rate also increased from 86.9 per cent to 87 .7 per cent. This indicates a reduced exposure of debt stock to interest rate volatility.

The domestic debt portfolio accounts for the biggest amount of debt refixing in a year, at 25.9 per cent (owing to treasury bills), compared to 24.9 per cent for external debt.

At least 77 per cent of external debt is fixed-rate, while 23 per cent is a variable rate.

The exposure depends on the amount and currency composition of external debt. External debt accounted for 51.3 per cent of total debt stock as of June 2021, and changed marginally (from 51.2 per cent - June 2020), indicating relative stability.

The top currencies include; US Dollar 66 per cent, Euro and the Japanese Yen at 66 per cent, 19 per cent and six per cent respectively, and is a result of reliance on certain creditors and/or market segments.

It is the movements of the exchange rates related to these three currencies that have the highest impact on the composition of the external debt stock and also the in-year external debt servicing.

Public debt refinancing provides the highest risk exposure due to the deteriorating of risk indicators and will be the cause of liquidity concerns in the medium term.

The 2022 MTDS indicates that there is a decline in the average term to maturity from 15.5 years to nine years and a subsequent increase in debt maturing in 1 year (both as a share of total debt stock from 11 per cent to 14.8 per cent).

According to PBO, the external debt redemption profile remained low, owing to its concessional composition and the role of the Debt Servicing Suspension Initiative.