The agency has warned of a possible rise in counterfeits during the festive season.

•In the local market, alcoholic drinks especially liquor products are among the most counterfeited. 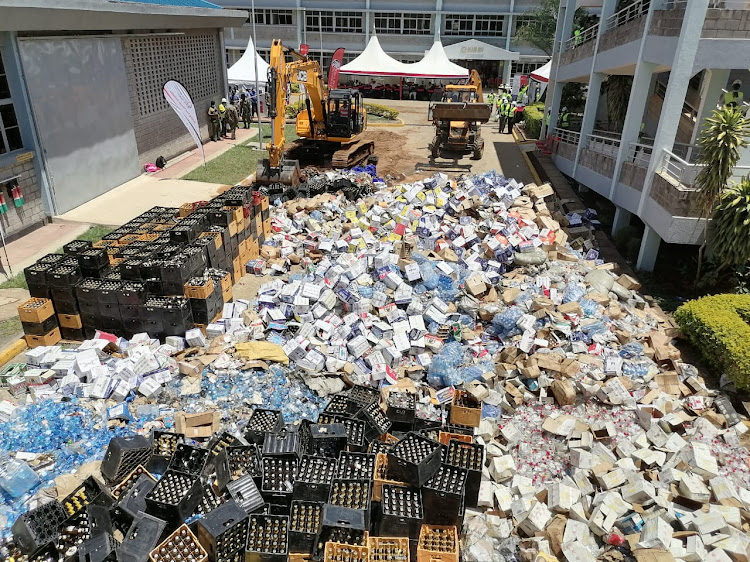 Illicit goods worth Sh800 million that were seized and destroyed in Kisumu during a past raid/FILE
Image: MAURICE ALAL

Kenya's is losing between Sh85 billion and Sh100 billion annually to counterfeiting activities alone, the Anti-Counterfeit Agency has said, with illicit trade denying the government the much needed development revenue.

This, as the agency warns of a possible rise in fakes during the festive season as counterfeiters target unsuspecting consumers on shopping spree.

“Counterfeiters look at fast moving goods,” ACA acting executive director Fridah Kaberia said, “ If we can deal with illicit trade in the country, we can create space for local manufacturers to grow.”

She spoke in Nairobi during a virtual forum hosted by Industrialisation CAS David Osiany on Tuesday.

The amount lost is enough to construct two of the Nairobi Expressways ( the Sh62 billion JKIA-Westlands Expressway) and about Sh27.8 billion shy the country's next financial year's national security budget of Sh180.9 billion.

Counterfeiting which is eating into genuine brands' market share, including local producers, has seen at least 44,000 jobs lost in the country every year mainly in manufacturing, the agency notes.

About 80 per cent of counterfeit imports coming into the country are from South East Asia ACA says, with China accounting for more than 60 per cent of the number of goods seized overall.

This is also the leading import source for Kenya with an import bill of  Sh361.5 billion last year–Kenya National Bureau of Statistics 2020 data.

However, new transit routes continue to show up with Dubai being a key transshipment point for fakes.

India has been reported as being an increasingly significant source of counterfeit medicines.

A national survey by ACA in 2019 revealed that the value of illicit trade in Kenya is at about Sh726 billion.

In the local market, alcoholic drinks especially liquor and tobacco products are among the most counterfeited.

Yesterday, the agency called on consumer to be aware of products sold outside the usual distribution channels (place), price undercutting, packaging and personal experience with a product.

According to ACA, one should compare a product with an authentic product at an authorised retailer noting that counterfeit products are manufactured to deceive a buyer and may be visibly identical to the authentic item.

However, they are usually poor quality, or missing features or accessories.

Some counterfeits can however be of even a better quality that the genuine brand but since the manufacturer has no brand in the market, they use already established brands to sale hence eating into their market share, a move that has affected growth of some companies.

The agency is working on a recordation system that will involve genuine brand owners sharing particulars of their brands to be incorporated in the system, which will help intercept fakes at the port of origin before they are shipped into the country.

The system is at 95 per cent complete with its launch expected in February next year, the agency's principal anti-counterfeit officer Casper Oluoch said.

The agency will conduct a stakeholder engagement before the launch.

“Anybody importing any goods into the country will be required to declare the brand. This way, we will be able to address counterfeits,” Oluoch said.

The system, he said will seal loopholes, create opportunities for local industries to produce and give confidence for multinationals whom will be assured the local market is not flooded by fakes.

ACA is also working with other state agencies including Kebs,security personnel and private sector to nab counterfeits and traders dealing in fakes.

Meanwhile, Kenya Revenue Authority has rolled out new generation of excise stamps for excisable goods as  part of its strategy to deter counterfeiting.