•Payments for deliveries have previously been made on the third week of the following month. 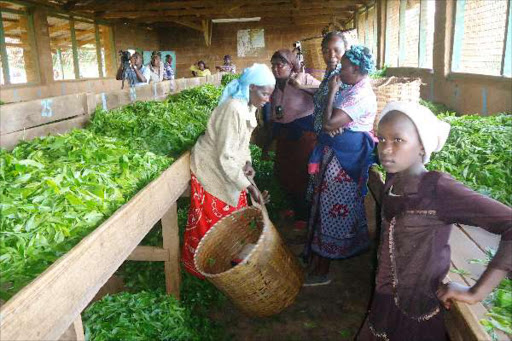 Smallholder tea farmers under the Kenya Tea Development Agency (KTDA) will be paid for their deliveries in the first week of the following month.

Announcing the new payment plan on Thursday, KTDA said it will translate into faster access to cash by farmers.

It said the change is a response to farmers requests for faster remittance.

Payment for deliveries has previously been made on the third week of the subsequent month.

Payments for 125 million kilos of green leaf delivered to KTDA-managed factories in November 2021, totalling Sh2.58 billion have already been dispatched to the banks, KTDA said.

The change in payment dates is part of the reforms initiated by the board that took over at KTDA in July 2021.

The change in payment regime is also aligned with other financial obligations which normally happen at the end of the month like salaries and rent.

Delay in payments has previously seen cash-strapped farmers resort to leaf hawking to access to money but end up selling to brokers at throw away prices.

The change, KTDA  says, is expected to eradicate the practice.

There are about 600,000 smallholder tea farmers affiliated to KTDA.

“We continue to push for real changes in the lives of tea farmers. Despite some resistance, we have continued to implement the reforms as mandated by our farmers,” he said.

Other changes introduced by the new board this year is the reserve price for tea from KTDA-managed factories.

KTDA introduced a reserve price of $2.43 per kilo of made tea on July 10, informed by a deteriorating market that had seen selling prices nearly slip below the cost of production.

Since then, the prices of KTDA teas at the auction have rallied from $1.9 before the introduction of the reserve price,  to a multi-year high of $3.11 rerecorded last week.

The board also increased its monthly pay to Sh20 per kilo for growers in regions in Kericho, Bomet, Kisii, Nyamira, Nandi, Trans-Nzoia and Vihiga counties.

It also lobbied for Sh1 billion fertiliser subsidy from the state,  and a reduction of interest rates charged by Greenland Fedha (KTDA’s microfinance institution) to eight per cent per annum, to boost affordable credit access and reduce the burden of the loans for tea farmers.