•Rising population and unpredictable weather events continue to complicate pastoralism due to scarcity in rangeland and natural resources.

•The project is aimed at improving the wellbeing of the local people while protecting nature and securing a healthy, connected landscape for wildlife. 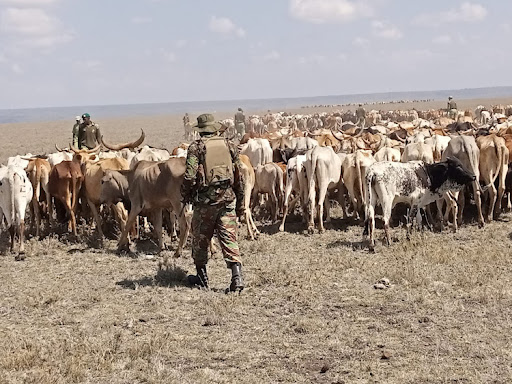 Police drive away some of the 1,200 cows surrendered by herders in Laikipia on September 22. Image: NPS

Livestock farming in Kajiado and Narok Counties is set for a major facelift following the launch of a new project that is aimed at helping the local community upgrade their herds.

Rising population and unpredictable weather events continue to complicate pastoralism due to scarcity in rangeland and natural resources such as water and pasture, scientists are recommending a shift in livestock management.

The project dubbed Land for Life is a transboundary project being implemented in southern Kenya and northern Tanzania landscape by the World Wide Fund for Nature - Kenya (WWF-Kenya) in partnership with the South Rift Association of Land Owners.

It is aimed at improving the wellbeing of the local people while protecting nature and securing a healthy, connected landscape for wildlife.

Further, the landscape contributes significantly to the national economies of Kenya and Tanzania and is one of Africa’s most globally significant landscapes for conservation.

These pressures on the landscape threaten ecosystem functions and livelihoods.

While adding that overstocking had adverse impacts on the environment, Dr Mulama further noted that there is a need to deal with the drivers of climate change so as to make conservation efforts successful.

"As an organization, we primarily focus on community livelihoods because we believe that the community has to be at the centre of conservation for the conservation goals to be achieved," Mulama said.

"We also need to realise is that boundaries are changing arbitraries while wildlife doesn’t recognise boundaries so if we look at southern Kenya you realise that many areas are continuous with northern. If there can be a mind shift in herd management we’ll still be achieving the same things.

The three-year project was launched at a Nairobi hotel.

John Kamanga, South Rift Association of Land Owners executive director explained that while pastoralists in the past kept livestock for prestige and not for the market, a number of changes have happened over time yet people still have to depend on livestock.

Kamanga said that the initiative will include giving the local communities a pedigree Sahiwal bull which they can then use to slowly and steadily upgrade their herds.

Sahiwal cow is a hardy animal good for beef and milk, the milk can supplement the family income while it can also be sold for beef, he added.

“The Zebu cow which the Maasais Kept for instance is very hardy but very small in size and took a long time to mature. It, therefore, took a long to mature for the market but even when you take it to the market it fetches very little," pointed out Mr Kamanga, adding that introducing multi-purpose breeds that are more productive and fast-maturing is key.

The programme will also help to connect communities and bring partnership with programmes in Kenya and Tanzania and continue to create a space for dialogue between Kajiaod and Narok Counties and Kenya and Tanzania on wildlife conservation policy issues.

Narok County Commissioner Evans Achoki reassured that the ongoing land adjudication in the area will not in any way interfere with conservation, pointing out that the government was closely working with all the stakeholders including landowners to ensure that both wildlife and the people benefit from conservation activities.

Achoki said the government will support the project to ensure that communities that live along the basin can benefit from the conservation and livelihood programme and good governance in terms of planned management.

"It is the government policy to adjudicate land so that citizens have the right to their land, we are in the process of adjudicating the whole area. It can be a challenge because once you have given a title deed to an individual you don’t dictate what they use the land for but we encourage them to come together under conservancies, lease the land to conservancies who manage the land," Achoki said.

The Ministry of Agriculture recently vowed to scale up meat supply in the country through reforms which it said will enable it to meet the 1.5 million cattle quotas gap of meat distributed yearly.

Kenya is a high net importer of meat despite boasting of the second-largest reserves of livestock in Africa with the Arid and Semi-Arid Lands occupying 80 percent of Kenya's region.

"To demonstrate the importance attached by the government with the meat industry, reforms on policy, legislation and institutional governance have been placed for the livestock sector," he said in a speech read by Principal Secretary in the state department of livestock, Harry Kimutai.

The four laws; the livestock bill, veterinary public health bill, animal welfare, and protection bill would be brought to the parliament for approval.

Munya said the government, will in the next six months, complete developing a comprehensive livestock master plan, which will enable the creation of a conducive and regulatory environment to ensure the industry thrives.