The survey by investment firm, Pangea Trust shows real estate is the most preferred investment vehicle for Kenyans working abroad 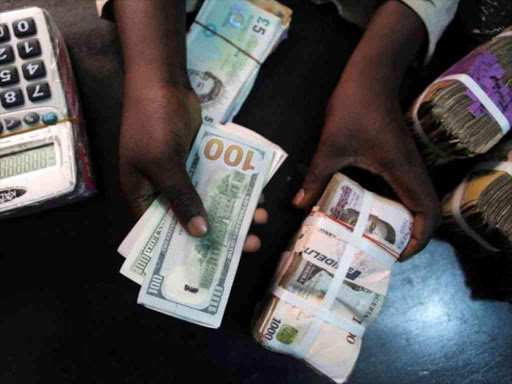 A trader changes dollars for naira at a currency exchange store in Lagos, Nigeria/REUTERS

A Diaspora Remittance Mapping in Kenya conducted by Pangea between April and June and released yesterday shows food, medical expenses and school fees took up to 50 per cent of $3 billion (Sh300 billion) sent to the country last year.

This is, however, an improvement compared to five years ago when up to 75 per cent of diaspora remittances was used to settle household needs.

The survey sampled 157 respondents from 27 countries where Kenyan citizens work and shows a growing appetite for investment opportunities in Africa from the diaspora.

Diaspora remittances is currently Kenya's highest forex earner after edging out tea in 2018.

Inflows have continued to grow steadily over a seven-year period (2013 – 2020) from $1.291 billion, representing an average annual growth rate of 14per cent over the period.

The study shows 14 per cent of adult Kenyans regularly receive on average Sh58,800 ($735) in remittances from abroad annually.

Source markets for remittances have on average maintained the same share with North America contributing 58 per cent and Europe 26 per cent of total remittances to Kenya.

Some diaspora workers have in the past few years started investing part of the proceeds they send back home, accounting for five per cent of their total income.

The Pangea Trust study however shows the current investment decisions are  largely driven by the availability of information on what investment opportunities exist and importantly by the level of knowledge on how to choose the most optimal investment options.

The frequency of investment-specific remittances varies widely among the diaspora, and this seems to a larger extent to be influenced by their source of income.

In terms of the value of investment-specific remittances, the diaspora investors are more likely to send on average larger sums of money valued at over $4,000 (Sh448,000) for business-related investments, although a significant minority also send amounts of between $1,000 and $2,000 (Sh112,000 to Sh224,000) annually.

Real estate accounts for the largest percentage of investments(29 per cent) with agriculture (12 per cent), education (nine per cent) and finance sector (eight per cent) equally being significant beneficiaries.

This be could largely be informed by the general ease of access to information on investment opportunities in the said sectors, including but not limited to industry growth, market data on payback, the potential return on investment.

In general, business investments were nearly evenly split between paying for new venture start-up costs (28 per cent), acquisition of capital items (27 per cent), and payment for operational expenses (25 per cent).

''Less support went towards financial investments in the form of additional capital or reinvestment profits (16 per cent), or debt repayment (four per cent),'' the report shows.

In terms of the source of funds for making investments, income from salary is the primary source for most diaspora (57 per cent), followed by earnings from existing businesses (32 per cent), with loans from financial institutions and family members accounting for seven per cent and five per cent respectively.

Regarding risk, return and impact expectations, most of the diaspora surveyed expected to earn returns from their investment that are equivalent to (30 per cent) or higher than existing market rates (38 per cent), regardless of the sector or opportunity at hand.

At the same time, many (95 per cent) also indicated that their investments were not purely driven by financial motives but by a combination of socio-economic contribution.