A barrel on Tuesday touched $85 amid a weak shilling to the dollar.

•The rise in prices is as a result of reduced production by OPEC which has been managing prices for the better part of this year.

•This is after a barrel slumped to below $20 on reduced demand when the pandemic hard-hit global economies last year. 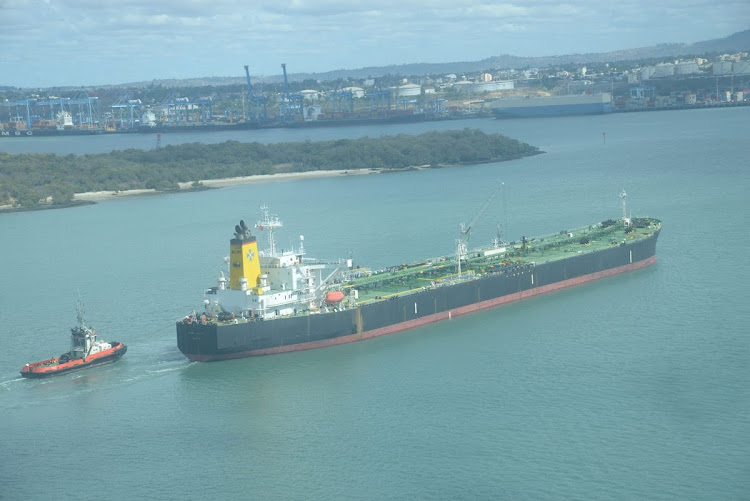 An oil tanker sailing into the Port of Mombasa/HANDOUT

Fuel prices are likely go up in this month's review as global crude prices hit a new high.

The government could however contain this through the continued use of the Petroleum Development Levy to cushion consumers.

The shilling's depreciation against the dollar now at a ten-month low of 111.20  from an average 110.21 in October will also come into play, as the local currency remains vulnerable on increased demand for the dollar by importers.

This is in the wake of growing international trade as global economies re-open from a near shut down at the height of the pandemic last year.

Central Bank of Kenya yesterday quoted the shilling at an average 111.35 to the dollar.

The rise in prices is as a result of reduced production by OPEC (Organisation of the Petroleum Exporting Countries), which has been managing prices for the better part of this year.

This is after a barrel slumped to a historic $20 on reduced demand when the pandemic hit global economies hard last year, where industrial, transport and logistics came to a near stop.

In Kenya, month-on-month consumption of super petrol, diesel and Jet A1 fell with April recording the lowest figures according to data by the Energy and Petroleum Regulatory Authority (EPRA).

Jet A1  which is used in the aviation industry, had the biggest dip falling by 85.6 per cent, on the ban on international commercial flight effected on March 25.

Consumption of diesel, used widely in the transport, agriculture and manufacturing sectors, dropped 26.8 per cent to 162,479 cubic metres in April from 221,891 cubic metres in March.

However, the government intervention through the Petroleum Development Levy saw pump prices reduce to Sh129.71, Sh110.60 and Sh103.54 respectively, in Nairobi.

“The government will utilise the Petroleum Development Levy to cushion consumers from the otherwise high prices,” EPRA director general Kiptoo Bargoria announced during the price review.

The levy is charged at Sh5.40 for every litre of petrol and diesel, and Sh0.40 on a litre of kerosene.

The move came amid a public outcry on rising fuel prices with Kenyans accusing the government of failing to cushion poor households and other consumers.

This is after the state stopped using the levy which it had used between June and August to manage prices.

Based on EPRA prices, high taxation remains the major contributor to the high pump prices in the country where consumers are paying nine different taxes on fuel products.

They include excise duty which takes the lion's share of Sh21.95 of every litre of petrol followed by the Road Maintenance Levy (Sh18).

VAT has been adjusted upwards to Sh9.98 while the Petroleum Development levy is charged at Sh5.40.

The move by the government to cushion consumers helped reduce transport costs as October inflation eased to 6.45 per cent from 6.91 per cent in September.

“Transport index decreased by 0.35 per cent mainly due to a drop in prices of petrol and diesel,” Kenya National Bureau of Statistics director general Mcdonald Obudho noted.