The food combo prepares the legendary ugali and beef delicacy

The cost of the food items has been on a steady rise since October last year, all recording more than a 10 per cent increase. 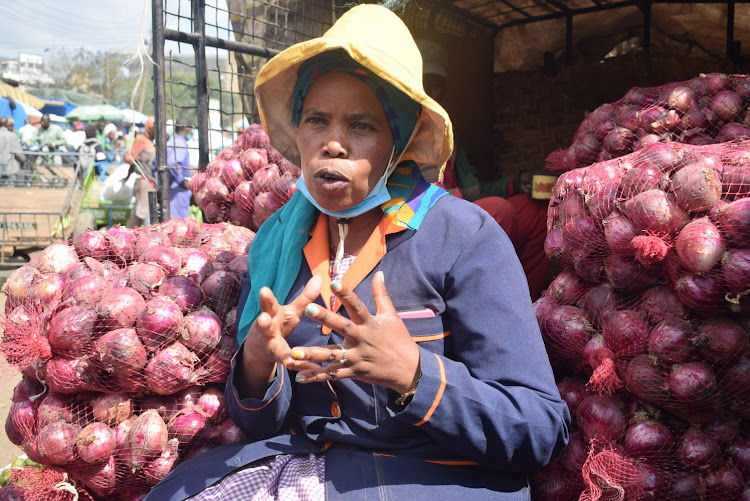 Julia Gakuru an onions vendor at Marikiti market market speaks during an interview with The Star on November 3, 2021
Image: CHARLENE MALWA

Juliet Wanjiru loves ugali, sukumawiki and meat, but to put her favourite meal on the table she increasingly has to spend more.

Last year around October she would spend around Sh400 to get the ingredients to prepare this, today she has to spend Sh600.

A quarter kilo of meat went for Sh150 then, now it ranges between sh250-300. To spice up her meal with tomatoes and onions and also enjoy some greens on the side she has to dig deeper into her pocket.

For the delicacy, Wanjiru now has to spend an extra Sh200.

Latest Kenya National Bureau of Statistics Consumer Price Index shows that to enjoy a meal of ugali and beef one requires an average of Sh820.

This is if you are purchasing one kilo of beef, tomatoes, onions and a two-kilo packet of maize flour.

The cost of the food items has been on a steady rise since October last year, all recording more than a 10 per cent increase .

Dominic Omondi sells meat at City market, he say the cost of beef has really increased over the year.

“A kilo of beef now goes for Sh500, but with the increased demand from hotels since the reopening it has increased to Sh600 as supply is constrained,” said Omondi.

Over a 12-month period, the price of a kilo of beef has increased by 10.55 per cent in comparison to the cost of the items last year

A spot check by the Star however shows that the price of tomatoes and onions has dropped slightly this week.

John Kamau a trader at Marikiti market says the cost of onions really shot up in October when a small sack of onions retailed at Sh1,200, but this is now down to Sh1,000.

“Our customers were really bargaining with us to sell to them at a cheaper price last month, but we couldn't since we also needed to get profits so demand was low,” said Kamau.

He says with the slight reduction in price he can now sell an onion at Sh10 down from Sh20 and this has improved demand.

John Muriu, a trader at Wakulima market says the cost of a 200kg crate of tomatoes has been on the rise hitting Sh8,000 in October. This is down to Sh6,000.

He notes that business has slightly improved since the lifting of the curfew and easing of other Covid-19 containment restrictions with demand for the tomatoes  improving.

“With increased operating hours you find us staying at the market for longer and clients such as hotels now order more since they can operate for a longer period,” said Muriu, who is also the chairman of tomato sellers at the market.

Overall, Muriu says times are still tough as the economy is yet to fully recover.

“Cost of unga and sugar has shot up, and this is hurting our pockets even with improved business,” Muriu said.

“We are hoping that with the reopening, things will get better but as per now we are just trying our best,” said Muriu.

“We are glad that the cost of onions is dropping as this also means we will get customers,” said Gakuru.

Gakuru however said life is still tough and food items costly due to the impact of Covid-19 on the economy.

“We are hopeful for recovery with the reopening of the economy by President Uhuru,” she said.