• Miano was a panellist during a panel discussion on accelerating clean technology innovation and deployment at the COP26 World Leaders Summit. 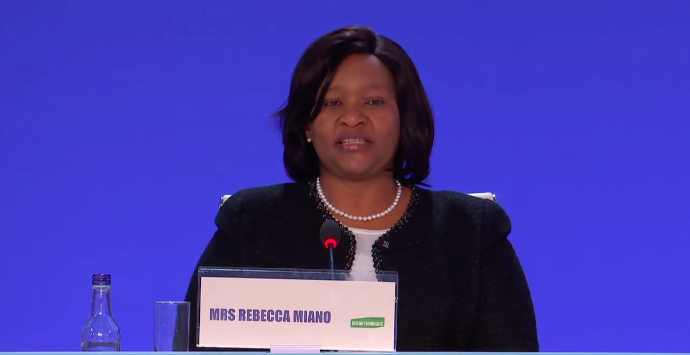 Miano was a panellist during a panel discussion on accelerating clean technology innovation and deployment at the COP26 World Leaders Summit.

Miano noted that KenGen has adopted a green energy strategy in expanding its generation.

"In 2020/2021, 97 per cent of KenGen’s energy sales was from renewable sources. This plays a critical role in moving Kenya towards a green economy," she told the summit.

The KenGen boss noted that innovation was well enshrined in the energy generator's strategy to ensure business sustainability.

"The implementation of our innovative ideas remains one of the key drivers of our strategy. Leading the continent in tackling and adapting to climate change is a cause dear to us as KenGen," Miano said.

Ahead of the panel discussion, President Uhuru Kenyatta addressed the summit calling for enhanced sharing of clean technology to accelerate the global move towards green energy.

Below are Miano's points as made during the panel discussion.

More than 40 leaders have pledged to scale up clean solutions, by imposing standards and policies.
News
2 months ago

What are KenGen's future plans on renewable energy deployment?

It is an honour to speak in this forum today in the presence of global leaders including my President HE. Uhuru Kenyatta, who is a great Champion of renewable energy.

We are at the forefront of the fight against climate change and support of Kenya Government’s ambition to achieve 100% renewable energy utilization.

Our future project pipeline, which is mostly green including geothermal, hydro, wind, and solar.  The projects expected to be completed between now and 2024 will add about 360MW of renewable energy to the grid.

How do you work with other actors so that clean technologies are the most affordable, accessible and attractive option?

The second part of this question is timely particularly in my home country Kenya and Africa as a continent. There is an urgent need to focus on renewable energy to meet our energy needs.

AfDB estimates Africa’s electricity access rate at about 40 per cent with over 645 million people with no access to electricity.

Indeed, the biggest limiting factor to green energy project development is funding which therefore calls for us to seek innovative financing models to help close the gap. In terms of partnerships, we deal with both State and Non-state actors in the delivery of our corporate strategy.

What is the engagement with non-state actors?

KenGen has also explored several opportunities with Non-State Actors including Capital Markets and has raised funds for green energy projects through instruments such as the Public Infrastructure Bond Offer and Rights Issue and we have always remained open to considering other innovative financing opportunities.

Internationally, we have partnered with and continue to enjoy financing support from development partners and technology providers to deliver electricity in the most affordable, accessible, and attractive manner.

What is the engagement with state actors?

On the side of State Actors, first is to recognise my motherland Kenya with the government being the majority shareholder of KenGen.  At the continental level, through our diversification strategy, KenGen has partnered with other African nations especially in the Horn of Africa in accelerating renewable energy deployment through geothermal resource development.

KenGen is at the forefront of Greening the African continent through geothermal drilling consultancy services in countries like Ethiopia and Djibouti in addition to capacity building and geoscientific feasibilities for Rwanda, Comoros and Malawi.

As I conclude, I am happy to confirm that we are ready and willing to share our expertise and skills in accelerating clean energy innovation deployment more so in geothermal development.

Indeed, in Africa, we have a golden chance to go green early enough when the opportunity for growth is still rife. Through partnerships which is SDG 17, we make the world habitat a better place for present and future generations.

The former US, Secretary of Energy and Nobel Laureate Steven Chu said: “As the saying goes, the Stone Age did not end because we ran out of stones; but we transitioned to better solutions. The same opportunity lies before us with energy efficiency and clean energy."

.@KenGenKenya has adopted a green energy strategy in expanding its generation. In 2020/2021, 97% of KenGen’s energy sales was from renewable sources. This plays a critical role in moving Kenya towards a green economy.⁰#COP26 #EnergyChampion #TogetherForOurPlanet pic.twitter.com/A92HB6YrGh