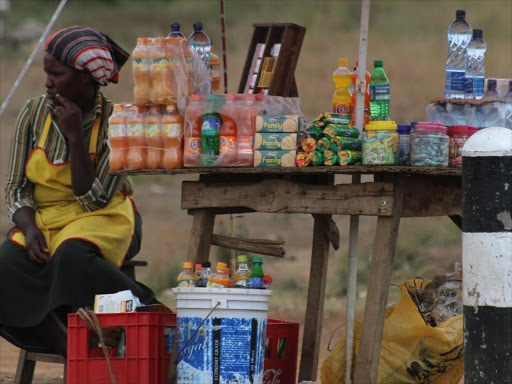 The open air shop in Ruiru along the Nairobi Thika superhighway. SMEs as key drivers of vision 2030, being a sector that accounts for 75 per cent of the workforce
Image: JACK OWUOR

Majority of Kenyans who were work in small businesses earn less than Sh20,000 per month, new report shows.

According to the State of SME Human Resource in Kenya 2021 report conducted by Viffa consult, 55 per cent of SMEs respondents paid an average salary of less than Sh20,000.

Finally, 3 per cent of the respondents indicated they didn’t pay salaries either due to family relations with employee or due to retrenchment.

“Sectors that paid a monthly average of over Sh50,000 were; media and entertainment, financial, construction and business support services,” the report notes.

Meanwhile, payment through mobile money and cash remains the major mode of payment of remuneration for SME respondents accounting for 79 per cent with bank transfer and cheque accounting for 11 and 10 per cent respectively.

Payment through mobile money presents in the following form; direct transfer to recipient phone and cash withdrawal from an agent.

Between the two the cash withdrawal from mobile money agents was preferred for two reasons; cost of withdrawal is borne by sender and recipient avoiding funds being ‘’cut’’ from mobile credit providers such as Fuliza by Safaricom.

The report further notes that although majority of SME respondents preferred higher education of Diploma and Bachelor’s Degree accounting for 69 per cent, there is a mismatch as the SMEs actually use majority as casuals and function based which are mostly semi-skilled.

This pattern resonates with SMEs where majority are informal and lean towards less technical sectors such as wholesale retail, food and accommodation

“Despite preference for high education there is a possibility of education industry mismatch as most SME employers prefer on job training/ apprenticeship for employees,” the report notes.

Kenyan SMEs are the backbone to the economy contributing 33 per cent of GDP, constitute over 98 percent of all businesses and employ over 30 per cent of the working population.

Despite SMEs prolific performance; the sector is riddled with challenges affecting their going concern or sustainability leading to job losses and diminished job quality with Kenya grappling with a high poverty rate of 36 per cent and an increase in new entrants to the job market at an annual rate of 1 million.

According to KNBS 2016 MSME survey only 63.8 per cent and 16.5 per cent were paid employees for licensed and unlicensed respectively which sheds some light on the state of human resource within the SME sector.

Why we should stop glorifying hustlers
by SUSAN NYAWIRA Business Reporter and Journalist
Kenya
29 October 2021 - 18:00