•Recurrent expenditure expected to go up.

•Budget expected to be approved by  January 31, 2022 before Parliament goes on recess for the general elections. 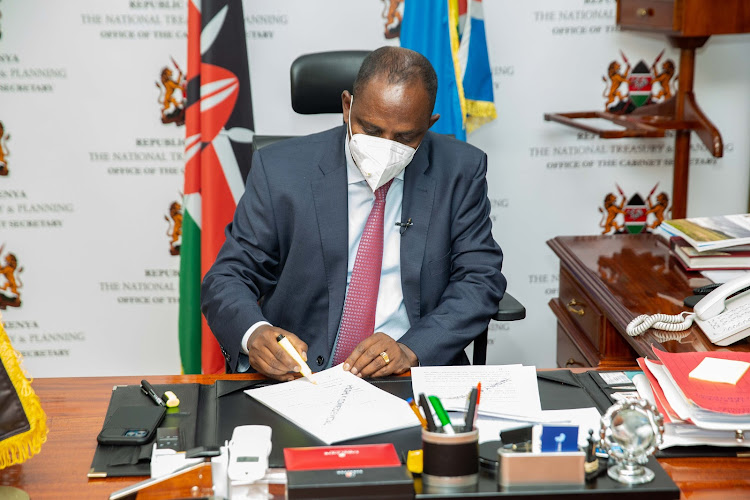 The government has cut development budgets for key sectors in the next financial year, the Medium Term Budget shows.

This is aimed at  balance spending which is expected to increase on recurrent expenditure.

The financial year 2022/23 budget is being prepared under a revised calendar that takes into account the preparations for the 2022 general elections.

The budget has been condensed to ensure submission by January 31, 2022, to ensure its approval before Parliament goes on recess ahead of the general elections.

National Treasury Cabinet Secretary Ukuy Yatani  is expected to present it in Parliament on  March 10, 2022.

In the next financial year, Treasury has proposed an overall expenditure and net lending of Sh3.23 trillion, but this could go up as a result of adjustments.

The current financial year's budget is Sh3.6 trillion having shot up from a proposed Sh3.02 trillion the previous year.

Treasury has proposed cuts in development spending  as agriculture, rural and urban development's overall budget being slashed to Sh64.9 billion from Sh75.7 billion in the current financial year.

Development spending is proposed at Sh39.7 billion down from Sh50.8 billion.

Overall budgets for these sectors have however increased, being pushed up by recurrent expenditure.

Energy, infrastructure and ICT however has the biggest proposed allocation of Sh360.7 billion, an increase from Sh335.8 billion in the current financial year.

Environment protection, water and natural resources has a proposed allocation of Sh109.9 billion up from Sh 100.5 billion.

Recurrent expenditure which includes salaries continues to take the lion share of government spending, and is projected to consume an estimated Sh2.14 trillion (15.6 per cent of GDP).

To help meet the expenditure, Kenya Revenue Authority is expected to collect Sh2.14 trillion up from Sh1.99 trillion.

Total revenue including Appropriation-in-Aid (A-i-A) is projected at Sh2.41 trillion.

“ This revenue performance will be underpinned by the on-going reforms in tax policy and revenue administration and boosted by economic recovery ” Yatani notes in the Budget Review and Outlook Paper that captures next financial year's spending plans.

Implementation of the Big Four Agenda and other priority programmes outlined in Medium Term Plan III of Vision 2030 is expected to continue.

The government is expected to borrow at least Shh776 billion to meet the budget deficit.

This will include Sh368 billion from foreign markets and Sh408 billion in the domestic market.

Proposed total debt financing for next financial year is however lower than the current year ending June 30, where proposed borrowing was at Sh929 billion.

“The government will continue to rationalise expenditures by eliminating non-core expenditures while improving efficiency in development projects implementation so as to contain expenditure growth, stabilise debt and reduce debt vulnerabilities,” Yatani said.