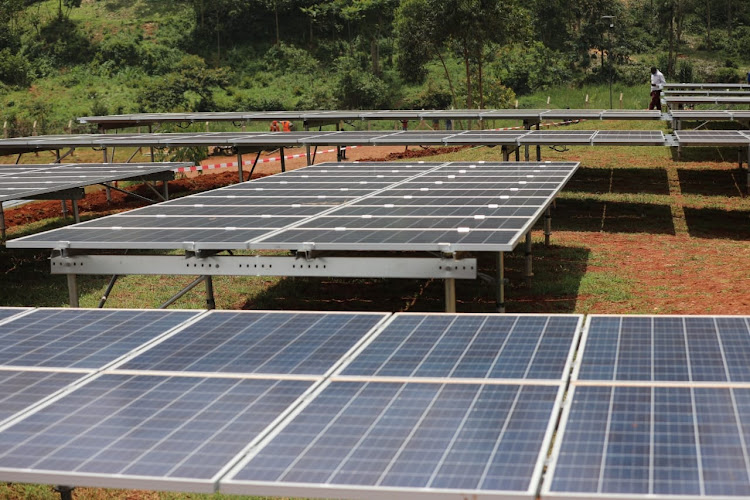 Vihiga The solar pannels on the field that are expected to generate power to pump water
Image: MARTIN OMBIMA

Even at 80 years old, Raphael Mauyu, a dairy farmer from southeast Kenya, has no plans to retire. But not long ago, he worried that his advancing age would soon make it impossible to carry on his labour-intensive job.

Mauyu’s six dairy cows require a regular supply of water and getting it to the farm at his home in the village of Mwithini every day was exhausting, time-consuming and potentially dangerous, he said.

The nearest river only flows during the two rainy seasons of the year, so the community has built sand dams - barriers across the river that trap sand, which in turn captures and holds water - to store river water to use when they need it.

The dams are a popular trick in Kenya’s parched regions, but one with risks.

“It is often dangerous to walk along seasonal river courses carrying heavy and unstable loads like water because of quicksand,” said Mauyu, walking past his field were hired hands were preparing the soil for planting.

But these days, Mauyu and other farmers in Mwithini no longer have to worry while they fetch water, after the installation of a new solar-powered system that pumps water from the dams to a safe collection point for the community to use.

As countries around the world suffer increasingly severe droughts and water shortages, farmers and water experts say finding cheap, convenient and non-polluting ways to access year-round water are more important than ever.

In February, the World Bank and the Makueni County government worked with farmers to install a 32-cell solar unit in Mauyu’s village, one of more than a dozen off-grid solar projects the World Bank has helped set up around Kenya.

A spokesperson for the World Bank directed interview requests to the Makueni government, which did not respond to several requests for comment.

Under the $150 million project, solar pumps are provided free of charge, with maintenance costs covered by users paying a small fee for the water they collect.

Mauyu said the solar pump in his village can pull enough water in a day to fill a 100,000-litre storage tank - enough to irrigate over 50 acres (20 hectares) of land.

While that amount does not meet all the villagers’ daily water demands, the farmer said it is more than they need to water their livestock.

And when the area is hit by a long dry spell, the tanks provide enough water for basic needs to see the community through to the next heavy rainfall, he added.

“I want to use this water to grow fodder on my farm. This will save me from experiencing livestock feed shortages when the rains are inadequate,” Mauyu said.

According to United Nations Water, nearly a third of the world’s population lives in water-scarce countries.

In Kenya - one of those countries - about 98% of farming is rain-fed and “highly susceptible” to climate change, according to the country’s Climate Smart Agriculture Strategy.

To meet their water needs in the face of diminishing supplies, more than 20 farmers in the village of Kalawa, also in Makueni county, have bought their own private solar-energy systems to pump water from dams on their farms.

They said the technology has saved their livelihoods in the midst of recurring droughts the region has been experiencing since the late 1990s.

Before investing in his new irrigation system, Mutwota said he used to rely on rains to water his crops, which resulted in poor yields or sometimes total crop failure.

Other farmers in the area struggled with manual pumps or used polluting petrol-powered systems before they also made the switch to solar, he said.

With more younger Kenyans choosing to work in the city rather than toil in the fields, solar pumps also allow older farmers to make a living for longer, said Dominic Omondi, an agricultural officer working in Kalawa.

In communities where people use hip or hand pumps, it takes two or more people - and a lot of muscle power - to draw water from a river or well, Omondi noted. A solar-powered pump only needs one person to operate it.

“When (people) get older, it becomes difficult for them to use manual pumping for water. But a person using solar pumps can sit back and the technology will do most of the work for them,” he said.

More than half of Kenya’s electricity is sourced from renewables, mostly hydropower and geothermal energy, with less than 1% generated through solar power, according to a 2018 report by the Stockholm Environment Institute (SEI).

At a climate summit in January, Kenyan President Uhuru Kenyatta declared the country will generate all of its electricity from renewable sources by 2030.

Phyllis Wakiaga, chief executive officer of the Kenya Association of Manufacturers, said for the country to reach that goal more needs to be done to encourage the widespread adoption of renewable energy.

That includes persuading banks to back renewable energy project, she said.

“The major barrier remains financing, majorly due to reluctance by financial institutions to fund such projects,” Wakiaga said in an email.

“We need to sensitize the local banking sector to appreciate the need to support solar projects.”