President Uhuru has challenged the American government to be reliable and predictable.

•The talks were put on hold to allow change of leadership after last year's US elections.

The Kenyan President however said relationships are between countries and people not between administrations. 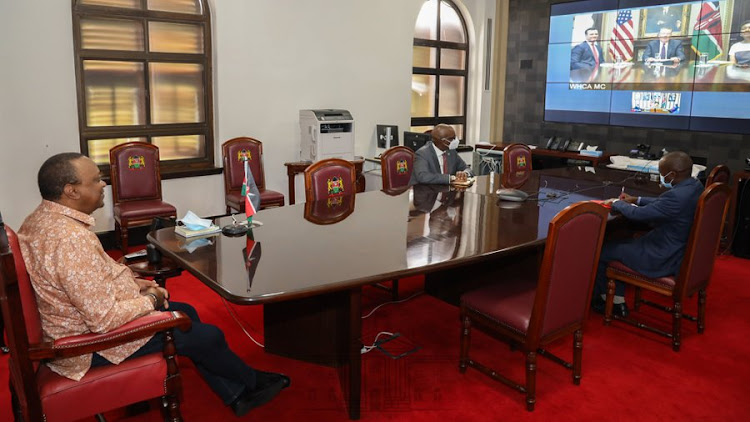 Kenya's trade deal with the US  might not be concluded in the next two years, fresh details show.

Negotiations for a Free Trade Agreement (FTA) which commenced on July 8, last year, have however stalled according to senior government officials at the Ministry of Industrialisation, Trade and Enterprise Development.

It could take up to two years to have a complete FTA, according to trade experts at the ministry.

This, as President Uhuru Kenyatta on Monday challenged the American government to be “a reliable and predictable trading partner” for key trade initiatives to succeed.

“Reliability and predictability in a partner is something that is critical. To our American friends, I would like to say that you know you cannot start and stop a discussion with partners on the basis of one administration after another. Relationships are between countries and people not between administrations,” Uhuru said.

He spoke in New York where he witnessed the signing of a detailed private sector agreement that seeks to expand trade and investments between Kenya and the United States of America.

The talks which commenced during former President Trump's administration were put on hold last year when the US went into elections, that saw President Joe Biden elected.

Biden's administration is said to be reviewing the pact with possibilities of fresh proposals for the trade deal.

“The talks stalled after Trump government exited. Biden took time to put his team in place. They seem to want to change a lot of what was discussed with previous team,” a government official who sought anonymity due to the sensitivity of the matter, told the Star.

The Covid-19 pandemic slowed down the talks last year, before the November elections.

The Kenyan government is keen to secure a free trade pact ahead of the lapse of the African Growth and Opportunity Act (AGOA) in 2025, which eliminates import tariffs on goods from eligible African nations.

According to trade CS Betty Maina, Kenya is keen to tap at least five per cent of the US market, which has the potential to earn the country more than Sh2 trillion in export revenues annually.

The US is keen to secure comprehensive market access for its agricultural goods in Kenya by reducing or eliminating tariffs.

The two countries also seek to develop rules of origin to ensure that the benefits of the agreement go to products from the United States and Kenya.

On Sunday, CS Maina met US trade representative Katherine Tai in New York, where they touched on the two countries' trade ties.

“Ambassador Tai and Cabinet Secretary Maina agreed to continue their conversation on the US-Kenyan trade relationship,” a statement by the US Trade Representative Press reads in part.

In a statement sent to newsrooms, President Uhuru said: “There is need to understand that if really we want to establish a base to be respected and to be known as a reliable partner, you cannot stop and start every five years. People don’t know about Democrats and Republicans, they know and understand the United States of America.”

Last year, the value of Kenyan exports to the US fell to Sh49.4 billion from Sh51.9billion in 2019, the Kenya Economic Survey 2021 indicates.

“The decline is partly attributed to the decrease in the value of domestic exports of shelled macadamia nuts, and articles of apparel and clothing accessories,” the survey by the Kenya National Bureau of Statistics states.

That of imports from the US equally dropped from Sh62.3 billion to Sh56.3 billion.

Post a comment
WATCH: The latest videos from the Star
by MARTIN MWITA Business Writer
Kenya
13 October 2021 - 04:00
Read The E-Paper