•In 2015, President Uhuru Kenyatta directed the Ministry of Lands to issue title deeds to all learning institutions.

•He ordered that school land ownership documents be processed and registered in the names of school committees and management boards. 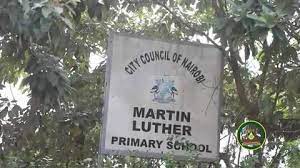 Learning institutions are not spared a private developers still remain a big threat to ownership of public land.

Land cartels in Nairobi have over the years been accused of grabbing land belonging to the public with the collaboration of officers from City Hall.

The case is not different as on Wednesday , property worth a million was destroyed after a private developer demolished a workshop at Martin Luther Primary School.

The demolitions which took place between 1am and 3 am saw the destruction of a workshop which has been part of the school since 1991.

Speaking to the Star, the school’s principal Jackson Gichuguma said there was no notice given on the demolitions which were supervised by police officers

“I was alerted at 1 am of the demolitions and it was under the supervision of police officers. I know the history of the school and there are people who have been after the land since the days of the city council,” he said.

However, this is not the first time as back in 2018, the workshop's roof was brought down in a similar incident, with the case currently before the court.

When reached for comment OCPD at Buruburu Police Station Kamau Ngugi said he was not aware of the operation.

“ I am not aware of the incident and If there were any police officers involved, they were not from Buruburu,” he said.

Martin Luther is a public primary school in Makadara sub-county next to The Point shopping centre.

Some of the property destroyed include students desks, seats, tables and computers.

The principal claimed that goons invaded and stole some properties.

According to a statement by a non –governmental organisation dubbed Shule Yangu Alliance Campaign, The school’s land, through the defunct Nairobi City Council  has been part of a land tussle with a private developer.

“The case of Martin Luther Primary is just a classic example of what many schools are currently facing in Kenya. Issues pertaining to land grabbing, encroachment, succession matters have been on the rise,”it reads," the NGO said.

As a result, the NGO is calling upon the Ministry of Education to ensure that the school is issued with a title deed according to the survey plan and demarcations conducted in 1956.

“We strongly urge the government to speed up the acceleration of titling of all untitled schools in Kenya which according to studies conducted by Shule Yangu Alliance, increases the risk towards encroachment and grabbing,” reads the statement.

Also, they are urging the Nairobi Metropolitan Service to take the necessary action in defence of the school.

“Action should be taken against the police officers who offered protection during the demolitions since it was illegal as there was no court order issued to the school,” the statement states.

Grabbing of Public Shcool land has been a threat to many schools as  56 per cent of schools in Kenya do not have title deeds.

In 2015, President Uhuru Kenyatta directed the Ministry of Lands to issue title deeds to all learning institutions, ordering that school land ownership documents be processed and registered in the names of school committees and management boards.

The directive was issued at a time when there was an attempt to grab a piece of land belonging to Langata Road Primary School in Nairobi.

However, six years later, schools still face the risk of being grabbed with Martin Luther being an example.

Despite the Bill, which is now a law, little has been done to protect public schools from land grabbers.