Kenyans struggle with access to healthcare as 80% lack insurance

•This is in a bid to increase penetration as well as enable the private sector to contribute to achieving the government’s goal of UHC. 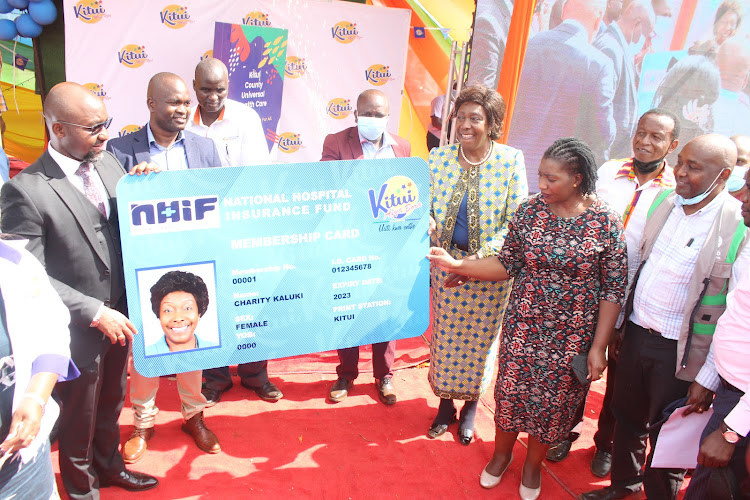 At the beginning of President Uhuru Kenyatta's second five-year term in office, in 2017, he announced a four-pillar strategy that would drive his development agenda.

This was expansion and growth of the manufacturing sector, affordable housing, food security and universal and affordable healthcare.

However to date, a large population of the country struggle to afford health services with private hospitals minting billions in profit, even as majority Kenyans lack health insurance.

Only 20 per cent of Kenyans have any form of health insurance even as the country is geared towards Universal Health Coverage (UHC).

This is according to the 'Draft Kenya Comprehensive Medical Report' that indicates the health sector is facing increasing low level of public health insurers penetration, and low levels of overall UHC.

The report proposes changes to the current health insurance regulatory framework in a bid to increase penetration as well as enable the private sector to contribute to achieving the government’s goal of UHC.

The draft report that has been developed by 13 Actuaries and consulting team who were contracted by National Treasury proposes to bring community based health within the regulatory of the Insurance Regulatory Authority (IRA).

It has called for licensing and regulating health maintenance organisations as a new license category at the IRA.

In addition, the report proposes that all policyholders should have access to the same policy options and be included in the same risk pool, while a prescribed minimum benefits (PMB) package for all health insurers should be implemented.

“There should be provision for regular review and amendment to the PMB package to adjust for changes in affordability and the overall disease burden,” the proposal document states.

In addition, the document proposes that IRA should have the power to enforce corrective measures on market players who are setting unreasonably low premiums.

It has also been proposed that insurers should file marketing material to the IRA for approval along with the benefit design approval.

The material should be simple for consumers to understand and signed off by a senior manager or a person with appropriate authority to whom the responsibility has been delegated.

These includes the Kenyan Medical Practitioners and Dentists Council, Clinical Officers Council, Nursing Council of Kenya, Pharmacy and Poisons Board and the Ministry of Health.

The authority has invited the public to give their views on the draft report that is key document that shall be used to develop the regulatory framework on medical insurance and a collaborative framework between the IRA and other stakeholders.

Healthcare in Kenya is financed by a combination of direct government expenditure, contributions to the NHIF and private health insurance, with the government being the main financier.

The government has been banking on the National Hospital Insurance Fund(NHIF) to provide accessible, affordable, sustainable and quality health insurance for all Kenyan citizens.

To increase the fund's ability, there has been a push to bring on board all Kenyans, a move that has however been opposed by the consumers' lobby group-Consumers Federation of Kenya(Cofek).

MPs last week approved changes to the NHIF Act which now makes it compulsory for every adult to contribute a minimum Sh6,000 annually.

Employers will be required to top up contributions of those who pay less than Sh500 monthly.

In modest estimates, the more than 20 million Kenyans will see NHIF pocket at least Sh120 billion a year.

The MPs rejected the National Assembly Committee on Health amendments, which sought to have the national and county governments foot the bills for about 5.1 million poor households.

The NHIF board will determine the rate payable by unemployed youth while employers with workers earning less than Sh12,000 will be compelled to top up their employees’ contributions.

Formal sector workers contribute to the NHIF based on their salaries with the highest contribution being Sh1,700.

Cofek has however urged President Uhuru Kenyatta not to assent to the amended NHIF law as the would-be law "cannot stand basic legal challenge on many fronts."

While NHIF is demanding a mandatory minimum monetary payout from members and employers, it has lesser accountability, Cofek has argued.

"For an organisation whose other name is corruption, that is most worrying especially when the NHIF board is reduced to government composition," the consumer body said in a statement.

According to Cofek Secretary-General Stephen Mutoro, employers are unlikely to top up NHIF contributions as that amounts to salary increment.

Majority will have to use the employee income to comply, if they must, he notes.

It also raises contractual questions between the employer and the employee.

"As for the unemployed, there is zero mechanism to enforce the contributions especially for majority Kenyans who genuinely cannot even afford money for their food, leave alone what seem to be luxury in hedging their hard-earned Sh6,000 in NHIF," he said.

The basic structure of NHIF on its offerings as well as accountability needed to have been amended before asking for huge contributions before an election year, Cofek says.

"Mandatory health contributions for NHIF has never worked. It will never work in Kenya. The forces behind the new form of taxation and levies must go slow and address the proposed service delivery before asking for more money," said Mutoro.

The federation has asked it's lawyers to review the law with a view to challenging it in court, should the  bill be assented to as it is.