•Trade CS Betty Maina said the formulation of the National Automotive Policy, which restricts importation of second-hand vehicles and spare parts, will accelerate the production of locally assembled vehicles.

-The Automotive Policy, which has been developed and approved by Cabinet, is being converted into a sessional Paper to be presented to Parliament. 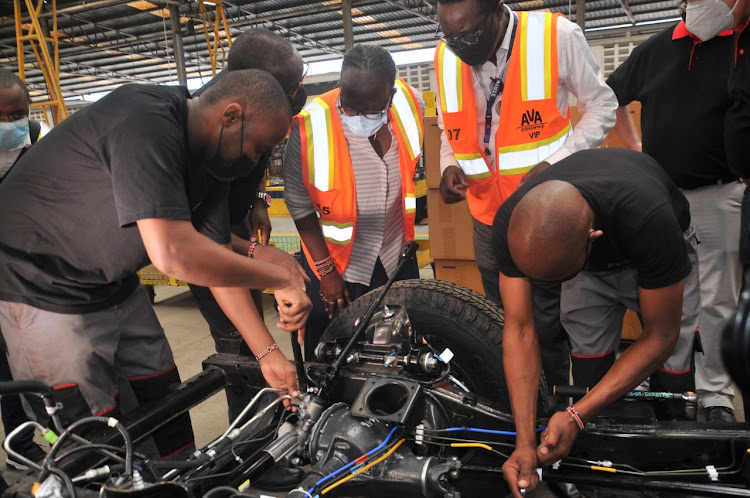 One such policy which Industrialisation Cabinet Secretary Betty Maina described as “a game changer” is the Buy Kenya Build Kenya, a strategy that has seen increased consumption of locally made products.

“The implementation of the presidential directive instructing all disciplined forces and MDAs to procure textiles and leather products from local manufacturers has enhanced manufacturing in these two sectors," Maina said.

The initiative has stimulated the local industries and to a large extent enabled the sectors to stay afloat,she added.

According to statistics released by State House and the Ministry of Industrialisation, by August 2021, the gazetted list for preferential procurement had grown to 682, cutting across 13 categories.

This means the list has more than doubled over the last year as it stood at 334 items as of July 2020.

Other items are building, mining and construction, food and beverages, leather and footwear as well as textile and apparel.

This means that for these specific items, government institutions have to buy from local manufacturers.

Also arising from the Presidential directives, Maina said, her ministry through Kebs has developed more than 30 standards for the various products that the disciplined forces consume.

“The standards and local capacity have been matched for fully locally manufactured supplies for the disciplined forces,” she said.

On Thursday, Maina and a team from the Presidential Delivery Unit toured three industries at the Kenyan Coast to showcase what has been achieved under Uhuru’s Big Four Agenda.

The three firms are Associated Vehicle Assemblers (AVA) in Miritini, Umoja Shoes, and Revital Healthcare EPZ, which are both in Kilifi.

At AVA, CS Maina said the formulation of the National Automotive Policy, which restricts importation of second-hand vehicles and spare parts, will accelerate the production of locally assembled vehicles.

The policy developed and approved by Cabinet is being converted into a sessional paper to be presented to Parliament.

“Since its development, investors have had the confidence to expand investments in the automotive sector to carry out local assembly for affordable Motor Vehicles and Motor Cycles,” said the CS.

AVA has the capacity to assemble up to 30,000 vehicles annually.

Last year, however, the firm assembled 3,000 vehicles at their plant in Miritini but they are projecting to double the production in 2021.

As part of government efforts to promote industrialisation, this year alone, the plant is delivering 300 vehicles to Kenya’s disciplined forces.

One vehicle is sold at an average of Sh2.5 million, which is about Sh750 million that is going straight into the local economy, according to Maina.

Next year, AVA will produce 400 vehicles for the police.

According to AVA operations manager Moses Abiero, the National Automotive Policy will see them increase the number of locally assembled vehicles due to increased demand.

An increase in demand means a doubled workforce. AVA projects to double its workforce from the current 360 staff to over 700.

They will also create 5,000 indirect new jobs by the year 2025, according to Abiero.

Currently, AVA has also established a training academy and they are hoping to partner with colleges and other learning institutions to help train students with the required skills, that are fit for the automotive industry job market.

At Revital Healthcare EPZ in Kilifi, Trade CS said the pharmaceutical sector has seen a lot of innovation, especially during this time of Covid-19 pandemic.

Revital, a Kenyan company that exports medical equipment to over 50 countries globally, 15 of them being from Africa, is the largest manufacturer of single-use syringes, needles, auto-disable syringes and syringes for fixed dose immunization in East, Central and West Africa.

It has a production capacity of 25 million medical equipment per month and has employed over 500 people.

The company is now producing Rapid Covid-19 test kits. They have developed kits that can test Covid-19 and give results within 20 minutes.

“Kenya is now producing a lot of sophisticated medical products that are exported to even western countries. This tells you that our country has come of age and we are able to meet global standards and demand,” said Maina.

The facility is planning to open up the first medical assembling plant in Africa expected to create slightly over 100,000 jobs.

The price of importing the same boot from abroad is about Sh8, 000.

This means that the government spent only Sh66 million buying locally manufactured boots, instead of Sh 176 million that could have been spent on imports.

The company, which has employed 2,500 workers directly, produces 80 million pairs of shoes annually.

It produces over 100 types of footwear products annually generating revenues to the government of up to Sh600 million shillings in taxes.