MD says the bank plans to open 15 new branches across the country before the year ends. 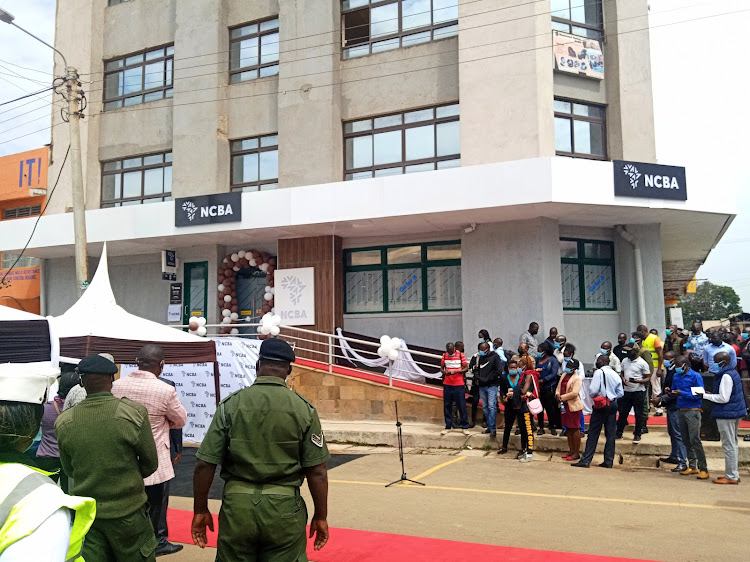 The NCBA on Friday opened a branch in Kakamega. The branch becomes the 76th in the country.

Group Managing Director John Gachora said was attracted to Kakamega by its rapid growth in Kakamega town and its environs that have increased demand for banking services.

“We have developed products that are tailored to the needs of smallholder farmers in this region to ensure their financial needs are met,” he said.

He said that the bank deployed its digital platform in the banking sector in the country to make transactions easier.

“We are the largest bank in the country. If you take credit from Mshawri or Fuliza then you are banking with us. We already have more than 300 accounts opened for the one week we have been operational,” he said.

Gachora said that the bank plans to open 15 new branches across the country before the end of this year.

Kakamega Governor Wycliffe Oparanya who was the chief guest during the event said that the branch opening goes a long way in the development and growth of businesses in the county.

“Opening of a new branch right at the heart of the county has a multiplier effect that will see its residents have access to loan services, asset financing, SME support programs among other lending facilities with ease,” he said.

He urged NCBA to develop specific products that will enable smallholder farmers engaged in sugarcane, fish, horticulture and dairy farming to borrow affordably to improve their ventures.

“As I conclude, I would like to encourage other financial players to emulate this move by NCBA Bank and provide the people of Kakamega with improved financial services to help us build and enhance the economy of Kakamega,” he said.

The governor said that Kakamega County is a growing commercial hub and economic gateway to the region.

He said that key sectors such as agriculture, manufacturing, financial services, co-operatives, ICT, health, education and trade are of special interest to us as a government mainly because of their impact on the livelihoods of the residents.

He said that the county was determined to bounce back despite the aftershocks of Covid-19, and the opening of this new branch will support the people as they trade as well as the county’s industrialisation and manufacturing sectors which have suffered most since the pandemic struck more than one year ago.