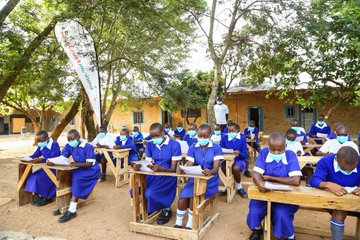 The Day of the African Child is marked on June 16 each year.
Image: SAFARICOM FOUNDATION/ TWITTER

More children risk being pushed into child labour as a result of the Covid-19 which could lead to the first rise in child labour after 20 years of progress.

According to the latest report by the International Labour Organisation (ILO) dubbed Covid-19 and child labour, the vice decreased by 94 million since 2000, but that gain is now at risk.

The global labour body cautions that most child labour and slavery cases are reported in economies in Sub-Saharan Africa and Asia, with several countries including Kenya mentioned.

''There has been growing exodus of both young and adults especially females exiting Kenya, Uganda, Eritrea and Ethiopia to Gulf countries since the pandemic hit the world,'' the report reads in part.

This is attributed to the closure of schools as a measure to curb the spread of Covid-19 in 2020 and the high poverty level in those countries.

Numerous organisations have reported an increase in child labour after the pandemic outbreak.

According to research conducted by the African Network for the Prevention and Protection against Child Abuse and Neglect (ANPPCAN) in four counties in Kenya, many children were affected when the schools were closed because the majority of the parents in the were either self-employed in the informal sector were small-time farmers generating minimal incomes.

Global estimates in 2017 showed that 152 million children were in child labour worldwide.

Children already in child labour may be working longer hours or under worsening conditions, the report says. More of them may be forced into the worst forms of labour, which causes significant harm to their health and safety.

“As the pandemic wreaks havoc on family incomes, without support, many could resort to child labour,” said ILO Director-General, Guy Ryder.

He added that social protection is vital in times of crisis, as it provides assistance to those who are most vulnerable.

According to the brief, Covid-19 could result in a rise in poverty and therefore to an increase in child labour as households use every available means to survive.

Some studies show that a one percentage point rise in poverty leads to at least a 0.7 per cent increase in child labour in certain countries.

The Covid-19 pandemic has seen thousands of parents have been laid off from their jobs across the continent pushing many families to the extreme of poverty.

In Kenya alone, just in the first three months of the pandemic, the Kenya National Bureau of Statistics announced that more than 1.7 million Kenyans have lost their jobs.