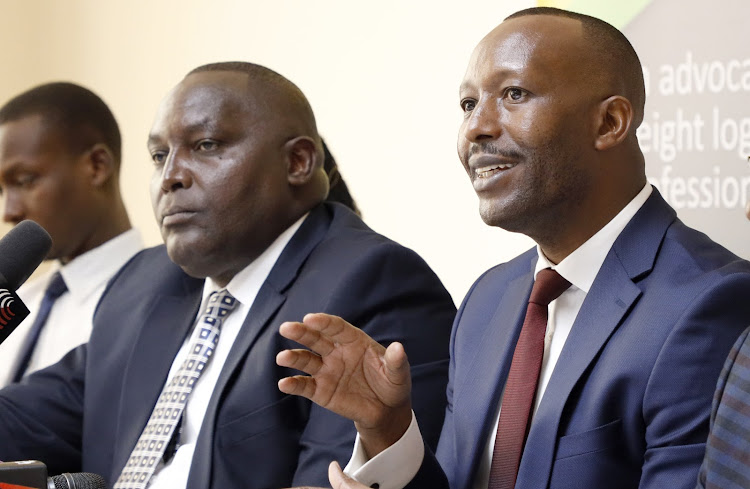 Kenya International Freight and Warehousing Association (KIFWA) has raised concerns over harassment of drivers moving units that are yet to get physical number plates.

This, as the country, continues to face a number plate shortage occasioned by a production hitch at the Kamiti Maximum Prison.

According to Kifwa, there are over 8,000 used cars imported, registered and cleared at the Port of Mombasa after paying the requisite taxes, but are yet to be issued with the physical plates.

“Drivers and importers are being harassed by police due to displaying written plates as per logbook and NTSA ( National Transport and Safety Authority) sticker on windscreens,” Kifwa National Chairman Roy Mwanthi told the Star yesterday, calling on NTSA to intervene.

Importers of the used motor vehicles have been spending at least Sh15.8 million a day on units parked at different Container Freight Stations (CFSs) awaiting plates, with the shortage being in place for the past one month according to car importers.

This translates to about Sh474 million a month with extra charges coming with demurrage costs.

“When are physical plates being available? Can NTSA write a letter to police to stop this harassment,” Mwanthi said.

Kenya National Chamber of Commerce and Industry (KNCCI) has also voiced its concerns, saying importers should not bear extra costs for inefficiencies they are not part of.

“They are charging businesses for their inefficiencies. Importers have paid the required taxes and what they expect is to be facilitated to move their units without any extra charges,” KNCCI Mombasa chapter CEO  James Kitavi told the Star.

On average, yards in Mombasa charge Sh2, 000 per unit per day inclusive of VAT. Container Freight Stations charge between Sh300 and Sh1,000 depending on the size of a vehicle.

The shortage has been prolonged by continued docking of car-carrying vessels at the port where seven more were expected between Tuesday last week and coming Sunday, Kenya Ports Authority vessel schedule shows.

They are bringing in a total of 4,568 units whose owners will be forced to wait longer before getting physical number plates, with most cars being parked at CFSs in Mombasa.

“Vessels are still coming in which means catching up will take time. We have a problem,” Car Importers Association of Kenya (CIAK) national chairman, Peter Otieno, told the Star.

NTSA has acknowledged the hitch citing a short supply of number plates and logbooks by the State Department of Correctional Services (prisons) and the government printer, respectively.

As of the first week of August, the authority was allocating number plates registration series KDD-P against the last series supplied of KDD-L, it said, thus translating to a deficit of 3,000 number plates pending supply.

It has written to the Kenya Revenue Authority to authorize the release of vehicles that have been duly registered and the e-sticker affixed on their windscreen, pending issuance of physical plates and logbooks.

“In the meantime, we are working closely with our suppliers to address the challenges,” NTSA director-general George Njao says in a letter to KRA commissioner-general Githii Mburu.

Challenges facing production also include the third plate sticker(e-sticker), which is among other standards recently introduced to enhance the identification of registered motor vehicles.

Sources at the Kamiti Prisons industries indicated to the Star there was a shortage of raw material(plates), which however came in last week and mass production has resumed.

Meanwhile, KPA has also been asked to release units held at the port if importers produce RFID (Radio Frequency Identification) stickers), thus the e-sticker and the original logbook, as evidence of registration.

Most affected are private vehicle importers and dealers importing units for sale.