Even so, the health of the country's improved for the second running supported by further rises in output and new orders. 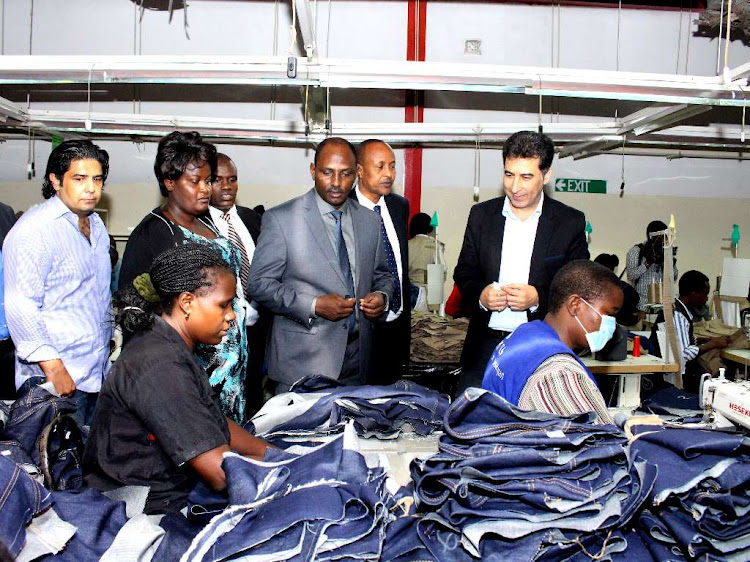 Cabinet Secretary for the Ministry of Labour and Social Protection Ukur Yatanni tours the Export Processing Zone at Ruaraka on May 14, 2018.
Image: EZEKIEL AMING'A

Kenya's business shrunk to second weakest since 2016 on enhanced Covid-19 restrictions especially in Uganda and Rwanda.

According to the latest Private Sector Managers Index released Monday by Stanbic Bank, the overall Purchasing Managers Index (PMI) slipped to 51 points in June compared to 52.5 in May.

Four of the five sub-components of the PMI dropped with the exception being the Stocks of Purchases Index which rose.

Uganda and Rwanda on other hand nearly locked the countries as  Covid-19 deaths and infections rose.

Despite the challenges, the health of Kenya's  private sector business improved for the second month running supported by further rises in output and new orders.

According to the headline figure derived from the survey PMI, readings above 50 signal an improvement in business conditions on the previous month, while readings below 50.0 show a deterioration.

Hiring activity continued as firms faced a renewed increase in backlogs, while there were additional efforts to build inventories ahead of predicted sales growth.

Output at Kenyan companies continued to rise at the end of the second quarter, but at a modest pace. Survey panelists found that an improvement in customer demand and greater cash flow supported overall growth.

Kuria Kamau, fixed income and currency strategist at Stanbic Bank said the pace of the recovery slowed in June following the strong improvement witnessed in May when some of the stringent public health restrictions were lifted.

''Both domestic and export demand increased on account of higher customer numbers and increased cash circulation, but the increase was at a slower rate than in May.

Kenya’s Purchasing Managers’ Index (PMI) for May improved slightly to 36.70 points from 34.80 points in April
Business
1 year ago

Experts have blamed the delayed payments for causing a jump in bad debts.
Business
1 year ago

The PMI grew to 53.2 points compared to 51.4 points in December.
Business
5 months ago

New order growth down to six-month low in November

A rise in output requirements encouraged firms to increase workforce numbers for the seventh consecutive month in November. The rate of expansion was ...
Business
1 year ago

To meet the rising demand, Kuria said firms increased their purchases, staff costs and output but at a slower rate than demand which resulted in an increase in work backlogs.

''Interestingly, the surveyed firms’ outlook for the economy over the next year worsened after more stringent public health restrictions were imposed on 13 counties,'' Kuria said.

New orders also increased in June, but to a lesser degree than in May. A similar trend was seen for export sales, as firms noted a rise in demand from European clients.

Firms subsequently added to their workforce numbers, although the rate of job creation slowed from the previous month and was marginal.

Meanwhile, suppliers’ delivery times were shortened to the greatest extent since last October.

Rising fuel costs and increased raw material demand drove another solid increase in purchase prices in June. Firms also saw a rise in staff costs for the second month running, albeit only a marginal one.

Overall input cost inflation was unchanged from May, leading businesses to raise their selling charges in a bid to sustain profit margins. Finally, the outlook for business activity in 12 months' time worsened in June and was almost level with the series nadir recorded in April.