The new facility is expected to become fully operational in December.

•It is banking on the Special Status Agreement signed in 2012, which is meant to enhance bilateral relations and drive crioss-border trade and investment.

•Ethiopia is heavily relying on the Port of Djibouti and other Northern port facilities. 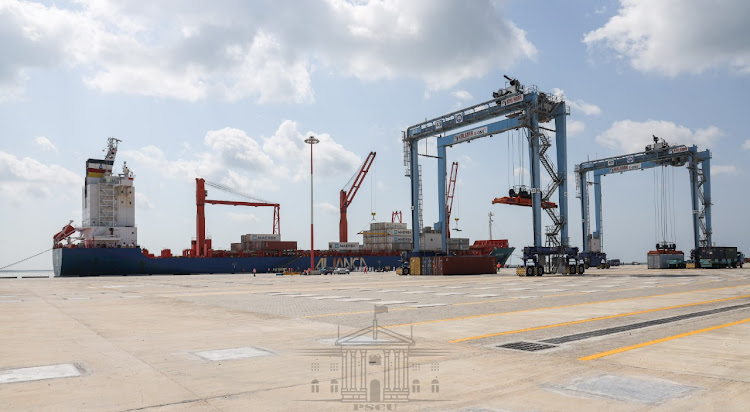 A vessel docked at the new Lamu Port/
Image: PSCU

Kenya plans to market the Lamu port to Ethiopian traders as it rides on the entry of Kenyan firms into the market that boasts of a 112.1 million market.

The Industrial and Commercial Development Corporation, Kenya Export Promotion and Branding Agency and Kenya Investment Authority are among key agencies leading the campaign.

Already Safaricom and KenGen have a foot into the Ethiopian market.

Kenya targets traders, shipping companies with offices in Ethiopia, importers, exporters, clearing and forwarding agencies, government institution among others, riding on the Special Status Agreement the two countries signed in 2012.

The deal was meant to enhance bilateral relations and drive cross-border trade and investment.

The mega project has been marred with cash constraints and a lack of political good-will, but the Kenyan government continues to push the project.

It has invested about Sh40 billion in the construction of the first three berths of the planned 23-berth Lamu Port.

Ethiopia is heavily served by the port of Djibouti.

Road and rail infrastructure between the two countries including the Ethio-Djibouti railway passenger and freight system, which commenced in January 2018, seems to have also shifted interest away from the Lapsset corridor.

The railway line will have an extension to Port Sudan on the Red Sea, projects that have seemed a threat to Lapsset.

Ethiopian Ambassador to Kenya Meles Alem has however assured of his country's commitment to the Lapsset corridor.

In a recent telephone interview with the Star, Alem said Lapsset is feasible and Ethiopia is depending on the corridor to serve the Southern part of the country.

He said connecting with other countries is a way of creating more links to serve the country, which is the second most populous in Africa after Nigeria.

“Ethiopia is a very big country, this is something people should understand, there is no question about the feasibility of Lapsset, it is our baby,” Alem said, “Ethiopia needs many ports.”

He said Eritrea and other neighbouring ports are only usable for the Northern part of Ethiopia.

“Southern part of Ethiopia has no other option apart from Mombasa and Lamu Port. It is very important to us, we need it as much as Kenya and South Sudan needs it,” he said, “We co-own the project, not for public relations or to please the Kenyan government or the people. We need it.”

During his visit to Ethiopia this month, President Uhuru Kenyatta fronted the Lamu Port saying it was a key pillar of the Lapsset Corridor project.

“The LAPSSET Corridor is a key regional project that has numerous opportunities for not only Kenya and Ethiopia but also South Sudan and other countries in Africa,” Uhuru said.

The two countries have also implemented the Moyale One-Stop Border Post for ease of movement.

During the opening of the border post, Ethiopian Prime Minister Abiy Ahmed challenged the Kenyan private sector to capitalise on the “untapped investment opportunities in Ethiopia.”

The Lamu region and the port has received a lot of government attention including the National Treasury’s plans for the next financial year.

During his 2021/22 budget speech, CS Ukur Yatani said the government is establishing a disease-free zone in Lamu to support the export of live animals and processed meat.

It has also provided various incentives at ports including exempting the fuel supplied to the shipping lines from import and excise 25 duty, VAT, as well as railway development levy and import declaration fees.

“To further attract more ships to our ports, particularly to the recently launched Lamu Port, the government will review the arrangements on fuelling by vessels calling at the Kenya Ports with a view to allowing ship to ship refuelling and establishment of fuel bunker facilities,” Yanai said.

He said the government’s current focus is to make Lamu a free port for both domestic and trans-shipment purposes.