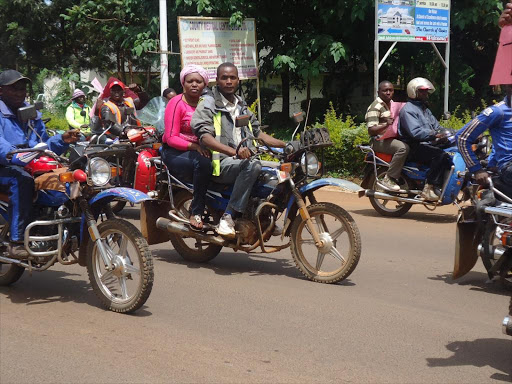 Nairobi's traffic snarlups brought about by the construction of the JKIA-Westlands Expressway is proving to be a boon for boda boda operators who have increased prices.

The construction of the expressway has caused major disruptions on the busy Mombasa road and Waiyaki forcing many commuters to opt for boda bodas in order to save on time.

With demand for the boda bodas on the rise, prices along the affected area has shot up.

Moses Wanyama who operates a boda boda in Syokimau, says he used to get few trips to the Nairobi CBD and used to charge a maximum of Sh500, but with the traffic jams, the least he can charge is Sh800.

“This construction seems to be a blessing from God, I am making twice as much as I used to make before, from Sh8,000 a week to around Sh15,000 following the high demand,” said Wanyama.

Benjamin Kiprop operates from Cabanas, Embakasi stage and its environs, he shares the same sentiments that the construction has come as a blessing in disguise.

Kiprop has since upgraded his motorcycle to  a better design with the profits he made since March.

Zainab Wangari, a Syokimau resident told the Star that once while heading to JKIA, she got stuck in traffic and had  to part with Sh1,000 to get a bodaboda.

“I understand they have a high demand but they should really try and consider Kenyans when pricing,” said Wangari.

Ian Kimani, a college student who lives just slightly past Jomo Kenyatta airport, says the heavy traffic on Mombasa road has seen him have to part with twice the usual amount he pays to go to campus.

“Some days I have to take a bodaboda at a cost of Sh1,200 to get me to my campus in Rongai, and this is quite expensive, I can't wait for the construction to end,” said Kimani.

Victor Mwendwa a bodaboda rider in Westlands says traffic on  Waiyaki Way hasn't been major but still the price per ride has gone up.

Mwendwa says he used to charge Sh200 from Delta Westlands to ABC place, but this has now now shot up to Sh500 due to high demand.

The riders however say  high fuel costs continues to  hurt their earnings.  Petrol in Nairobi currently retails at Sh126. 37 per litre.

“I might be getting more money from the trips but operation costs have increased due to the high cost of fuel,” said Wanyama.

Matatu operators along these routes said they are taking longer in traffic which eats into their earnings.

Matatu Owners Association Chairman, Simon Kimutai, said they are counting losses from the traffic as they are now making fewer trips .

“The social distancing rules had reduced earnings by 50 per cent, the traffic has now reduced them further by 10 per cent, the industry is really suffering,” said Kimutai.

The 27-kilometre Express way is set to be complete by end of 2021, giving boda boda operators more time to rake in profits..