They have been carrying half-load since March last year.

•The country has witnessed two major cessations of movement in the past one year which saw long distance operators shut business.

•Matatu Owners Association has called for a waiver on levies, among them the seasonal tickets charged at an average Sh5,500 in Nairobi. 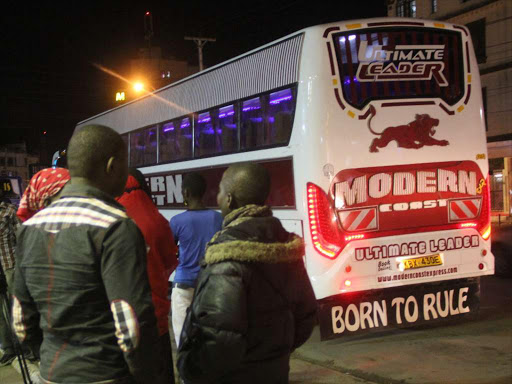 Long distance bus companies have been greatly hit by the Covid-19 social which has seen a major drop in earnings  pushing some operators out of business.

Modern Coast Express Limited (Modern Coast) which operates on the Mombasa–Nairobi route, upcountry Kenya destinations and into Uganda, Tanzania and Rwanda is among major players that have temporarily suspended operations.

Sources in the transport sector said the company's management decided to ground its buses as the business was no longer viable.

Mash East Africa, which has operations in Kenya, Uganda and Rwanda, with a fleet of more than 60 buses, yesterday said it has about 17 buses in operation with the rest having been grounded on low business occasioned by social distancing   and the nationwide nigh curfew which has affected night travel.

“Most of our buses are not on the road. We are struggling but doing the best we can to offer services to our customers,” general manager Lennox Shalo told the Star in a phone interview, noting the company has had to send most of its workers on leave.

Easy Coach, which serves the wider Western, Nyanza and Rift Valley regions with a fleet of about 100 buses said its cost of operations has doubled, as it's buses no longer do return journeys due to the curfew.

Managing director Azym Dossa said while lifting of restricted movement in the counties of Nairobi, Nakuru, Kajiado, Kiambu and Machakos has allowed travel to upcountry, breaking even remains a challenge.

“Fuel, rent and transport are surging upwards yet earnings are low. At least several staff were recalled and they could put food on their table but cost of doing business is high,” Dossa said.

He said while it might not be prudent to remove the social distancing, yet, despite airlines and SGR not being restricted, there is need to cushion operators through tax incentives.

“We do not see any break in the new finance bill, new employment Act and no light at the end of the tunnel,” he said, “ We shall plod on and pray we shall overcome.”

The Sh113.b billion losses are pegged on the average daily gross earnings of between Sh8,000 and Sh15,000 on normal occasions according toMOA, which says 30 per cent of these has been wiped out as operators struggle to maintain vehicles.

This puts total average monthly earnings at between Sh14.4 billion and Sh27 billion, on the higher side, when business is normal.

In the 13 months since strict measures were put in place, the industry would have earned about Sh378 billion on the higher side.

However, 14-seater vehicles are only allowed to carry eight people. 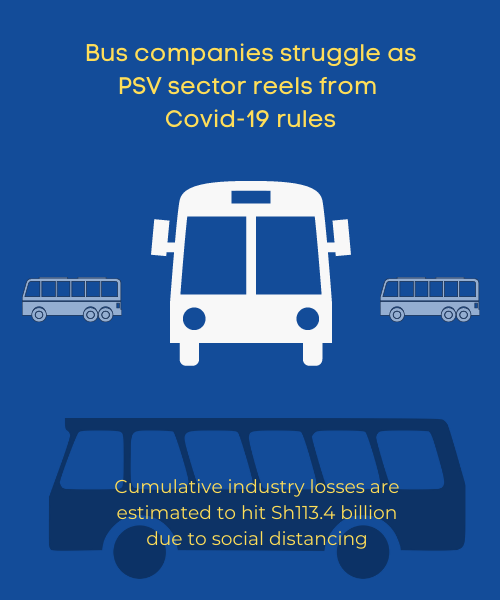 The 25-seater vehicles is allowed to ferry 14 passengers while those with a capacity of 30 persons and above are required to carry 60 per cent of their space.

The country has also witnessed two major cessations of movement in the past one year which saw long distance operators shut business.

The initial one restricted movement into and out of the Nairobi Metropolitan Area, Mombasa and Mandera Counties imposed in April 6, 2020 and lasted about three months.

On March 26 this year, President Uhuru Kenyatta announced the restrictions of movement in the five key counties ( Nairobi, Nakuru, Kajiado, Kiambu and Machakos ), which were zoned as one disease infested area.

He lifted the ban on May 1, allowing movement.

Most long distance bus operators are estimated to be making a loss of Sh40 million a month, despite slightly adjusting their ticket pricing upwards to compensate for the empty seats.

“It is uneconomical to operate a public service vehicle. What operators are getting is not enough even to manage the costs of operating. We are running at losses big time,” MOA chairman Simon Kimutai told the Star.

He said some operators have been thrown out of business as bank's move to reposes vehicles over loan defaults.

Kimutai wants county governments to waive levies for the industry, among them the seasonal tickets charged at an average Sh5,500 on every PSV, per month, in Nairobi.

“If they can also zero rate taxes on fuel, then we can at least talk of doing business but since the social distancing came in place, we are doing charity work,” Kimutai said.

They will be advised soon, transport PS Solomon Kitungu says.
Business
3 months ago

With the government directives on social distancing, workers to operate from home and the recently effected 7 pm to 5 am curfew, the public transport ...
Business
1 year ago
by MARTIN MWITA Business Writer
Kenya
13 May 2021 - 04:00