Largest vessel docks at the Port of Mombasa

The ship is owned by Ever Green company.

•Container carrier MV Ever Unity is the largest vessel in terms of capacity to call at the Port of Mombasa this year. 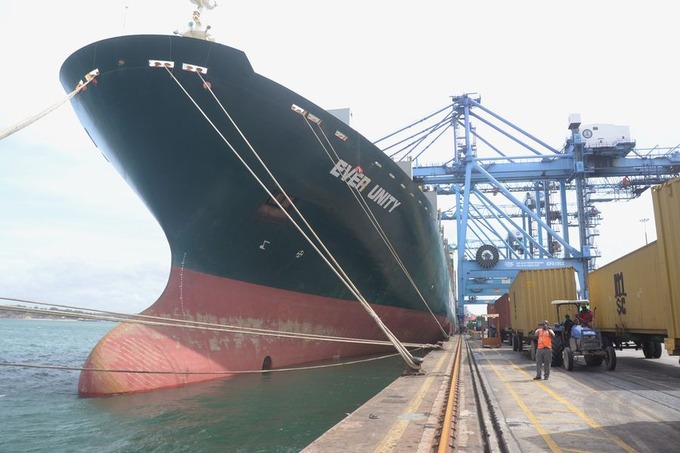 MV Ever Unity docked at the Port of Mombasa/HANDOUT

The Port of Mombasa last week received the largest vessel,  in terms of capacity, as the facility recorded the highest performance in container handling.

Container carrier MV Ever Unity is the largest vessel in terms of capacity to call at the Port of Mombasa this year.

The ship owned by Ever Green company with an overall length of 285 meters, arrived at the Port of Mombasa on Tuesday at 1400 hours on her maiden call carrying 8,892 TEUs in and out.

It was scheduled to sail out of the port yesterday.

He noted that the vessel’s performance of 4,238 moves in eight shifts of eight hours is the highest so far in Mombasa.

"The performance was as a result of good coordination, teamwork and supervision,"Mwasinago said.

By Friday afternoon, the vessel had a balance of 1,172 moves to complete the loading before sailing out of the Port.

“We also want to sincerely appreciate Ever green. We don’t take it for granted when you choose Mombasa as your preferred port,” Mwasinago said.

The port has continued to register improved performance despite the unprecedented disruption of global maritime trade by the Covid-19 pandemic.

In the first quarter of 2021, the port handled 9.54 million tonnes of cargo compared to 8.62 million tonnes in a similar period last year. This is a 10.7 per cent growth.

According to Kenya Ports Authority acting managing director Rashid Salim, between January and March, container traffic grew by 14.3 per cent.

In transshipment business, container traffic grew by 68.4 per cent between January and March.