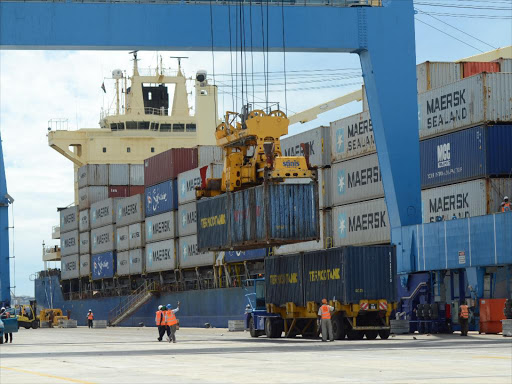 Containers at the ort of Mombasa /VICTOR IMBOTO

The country's balance of trade in goods and services recorded a nine per cent growth in the fourth quarter of 2020, according to the latest CBK quarterly review.

“This is mainly attributed to improved earnings from exports and a lower import bill which more than offset lower earnings from services,” CBK said.

The value of merchandise exports increased by three per cent to $1.47 million in the fourth quarter of 2020 reflecting increased earnings from horticulture, chemicals and manufactured goods.

Receipts from horticulture also improved by 16 per cent supported by a recovery in international demand and sufficient cargo space to $265 million compared to $228 million in the corresponding period in 2019.

Receipts from tea on the other hand declined by eight per cent to $282 million from $305 million in the fourth quarter of 2019 due to lower international prices, which were occasioned by relatively higher tea production in Kenya in 2020.

The value of merchandise imports also declined by 13 per cent to $3.79 million in the quarter from $4.3 million in a similar quarter in 2019, largely due to reduced imports of oil products as a result of relatively lower international oil prices.

Imports of chemicals and manufactured goods improved by two and nine per cent respectively reflecting a recovery in imported intermediate inputs.

Imports from China accounted for 23.8 per cent of total imports to Kenya making it the largest single source of imports, despite a 20 per cent decline when compared to a similar quarter in 2019.

Imports from European Union declined by $4 million, while those from Africa decreased to $486 million in quarter four of 2020 from $512 million in the corresponding quarter of 2019, reflecting lower imports from South Africa.

In the EAC region, exports from Uganda, South Sudan and Rwanda increased while those to Tanzania decreased.