Inside Mathuki's big plans for EAC

•The Kenyan has taken over from Burundian Liberat Mfumukeko who handed over the instruments of office on Friday, in Arusha, Tanzania.

•Among his top agenda is the finalization of the comprehensive review of the EAC Common External Tariff (CET) and its uniform application in the bloc. 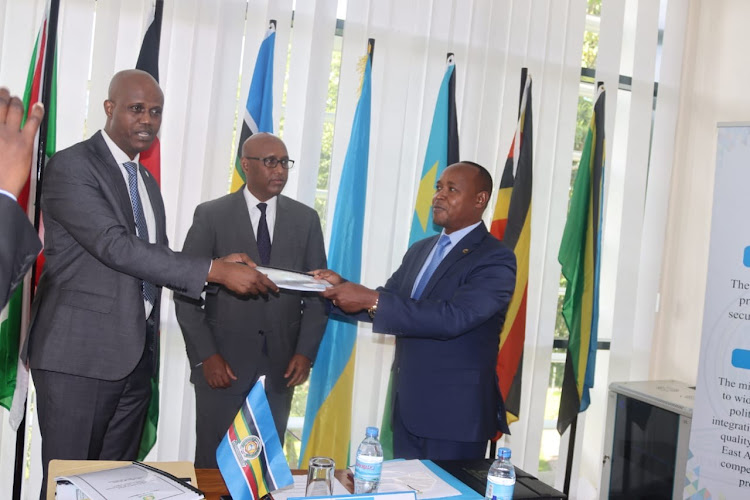 Outgoing Secretary General Liberat Mfumukeko (L) hands over the mandate to the incoming Peter Mathuki at an event in Arusha, on April 23. Looking on is Kenya's East Africa Community (EAC) Affairs and Regional Development CS Adan Mohamed, who is also the Chairperson of the EAC Council of Ministers/HANDOUT

Incoming East African Community(EAC) Secretary General Peter Mathuki has outlined priority areas he will focus on, with an achievement target of as early as end of this year.

The Kenyan has taken over from Burundian Liberat Mfumukeko who handed over the instruments of office on Friday, in Arusha, Tanzania.

Among his top agenda is the finalization of the comprehensive review of the EAC Common External Tariff (CET) and its uniform application in the bloc, Mathuki pledged as his five-year tenure starts tomorrow, noting that the initiative is “ long overdue.”

“I will be keen to fast-track the process by end of this year,” Mathuki said in his speech during the handover ceremony.

The EAC-CET comprises a triple band structure for raw materials and capital goods (0 per cent), intermediate goods (10 per cent) and final goods (25 per cent), as well as a Sensitive Items list with exceptions to the three-band rule for specified commodities attracting high rates of duty (notably, all above 30 per cent).

The private sector has been pushing for the finalization of the comprehensive review of the CET and rules of origin since 2016, which are seen as a catalyst for industrialization, while protecting the regional value chain sectors.

NTBs generally include laws, regulations and administrative and technical requirements (other than tariffs) imposed by a partner state, whose effect is to impede trade.

Removal of NTBs is expected to drive intra-regional trade to at least 30 per cent in the short-term, with Mathuki targeting to have it grow to over 50 per cent by the end of his tenure.

It is currently at a low of 13 per cent compared to common markets such as the EU which is at 67 per cent.

“Depening implementation of the Common Market protocol and restructuring the EAC Secretariat to achieve the mandate envisaged in the treaty are some of my key priorities,” Mathuki added, during his inauguration speech.

He is keen to work with the EAC member states and the region's private sector in resolving persistent trade disputes.

Adoption of an EAC-coordinated approach in harmonizing Covid-19 testing charges, fronted by the private sector through the East African Business Council (EABC), will also take a front seat.

“Putting in place economic recovery response mechanisms, digitalization and coordinated approach on Covid-19 response measures, which include allocation of testing facilities at all EAC border posts is instrumental in mitigating the trade disruptions and losses brought forth by this pandemic,” Mathuki said.

In his agenda for the region, the new Secretary-General also aims at focusing on harmonization of domestic taxes and standards and pushing for the adoption of the One Network Area (ONA) by all EAC Partner States, to reduce the high cost of telecommunications across the region.

In a move to promote the region as a single investment destination, Mathuki noted that he would prioritize a condusive regional business environment, and the implementation of the single tourist visa that will entice more Foreign Direct Investments (FDIs) and spur investment.

As chief executive of EABC, Mathuki shaped together with the Federation of German Industries (BDI) the advocacy agenda for industrialization.

“The region needs to strengthen its resources and capabilities for elevating its manufacturing basis,” he said.

In his remarks during the inauguration, Mike Falke, Country Director of Deutsche Gesellschaft für Internationale Zusammenarbeit (GIZ) for Tanzania and EAC, said GIZ, is ready to continue supporting regional economic cooperation, pandemic preparedness, health and digitisation together with its partners in the EAC and the new Secretary General.

The SG position is rotational among the member states every five years, for a five-year fixed non-renewable term.

The Secretary-General is the principal executive and accounting officer of the Community as well as the Secretary of the Summit.

Uhuru takes over chairmanship of EAC from President Kagame