•This comes at a time when the prices of milk and maize flour have also increased.

•The cost of living has been on a rise with inflation hitting an 11–month high last month, mainly pushed by increases in the cost of transportation, fuel, and basic foodstuffs. 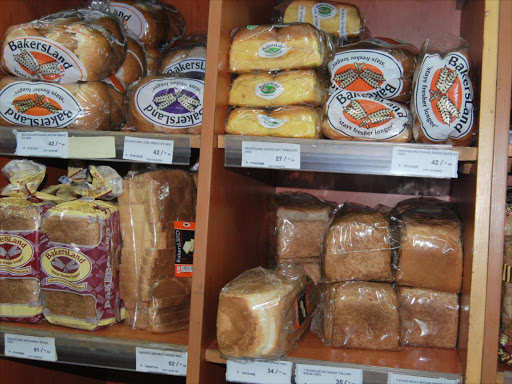 Breads displayed in a shop/FILE

The cost of bread has increased by at least Sh5 in recent weeks, signaling a continued rise in the cost of living in the country.

This comes as the increase in the cost of fuel coupled with disruption in the global shipping business impacts on the local market.

Almost all the bread brands are currently retailing at Sh55 for a 400 gramme loaf, up from Sh50.

A 600 grammes loaf is going for Sh70 up from Sh65, which now millers are attributing to the increase in the cost of importing wheat, which has pushed up the cost of bread in the country for the first time in almost four years.

The prices of wheat flour has also gone up at a time when the price of milk is also high.

More than 80 per cent of Kenya's wheat import is sourced from Russia, Argentina, USA and Ukraine.

Local production has failed to meet demand, with the country's annual consumption standing at an average 900,000 tonnes against a production of about 350,000 tonnes.

The Cereal Millers Association (CMA) yesterday said over the past few months international wheat prices have risen from $220 (Sh23,507) to $330 (Sh35,260) per tonne, representing a 50 per cent increase.

“The price of global wheat has moved up due to lower global stocks. China is restocking hogs and therefore buying more grains. There is also significant increases in marine freight due to availability of vessels as the world economy improves

Locally wheat prices  range from between Sh3,600 and Sh3,800 per 90kg bag, as compared to the initially agreed floor price of Sh3,250. This in turn has led to an increase in flour prices.

“The price of global wheat has moved up due to lower global stocks. China is restocking hogs and therefore buying more grains. There is also significant increases in marine freight due to availability of vessels as the world economy improves.  Higher fuel prices are also contributing to higher costs,” CMA chief executive Paloma Fernandes told the Star.

On Monday, millers also warned of a maize shortage and increase in prices of the country’s staple food, a catalyst for a possible rise in the prices of maize flour.

This has been mainly caused by the recent ban on maize imports from Uganda and Tanzania.

While the association said it welcomes the ban on maize that contains Aflatoxin levels above the 10 parts per billion (ppb) threshold, it is requesting the government to allow maize that does not breach this level be allowed to avoid a grain shortage.

Kenya consumes an average of three million 90kg bags per month and some of this maize must be imported due to differences in harvesting periods in various counties.

According to CMA, its members, who account for over 40 per cent of processed flour, are holding stocks of around 1.5 million bags and are concerned that at present, there are no significant stocks to ensure unrestricted supply of maize flour.

Consequently, the price of a maize flour bale has increase to Sh1,250 with room for a further price increment should the situation not to be resolved immediately, CMA says.

It has recommended to the government the immediate formation of a joint task force to ensure that there is full coordination and communication of the current maize restriction, and ensure involvement of all regulators.

It also wants the temporary lifting of the requirement for Certificates of Conformity until the processes are seamless.

“The CMA is confident that the proposed immediate measures will protect Kenyan consumers from higher food prices,” it said in a statement.

The increases in foodstuff prices are not going down well with households who are taking the heat from the effects of the Covid-19 pandemic that has led to salary cuts, job losses, and closure of businesses.

Inflation – a measure of changes in the cost of living last month hit an 11–month high mainly pushed by increases in the cost of transportation, fuel and basic foodstuffs, according to the Kenya National Bureau of Statistics (KNBS).

“The month-on-month food and non-alcoholic drinks’ index increased by 0.35 per cent between February and March. This was mainly attributed to increase in prices of some food items, which outweighed the decrease in prices of other foodstuffs,” KNBS managing director Macdonald Obudho said in a statement.

During the month, housing, water, electricity, gas and other fuels’ index increased by 0.59 per cent.

This was mainly attributed to increases in the price of kerosene and electricity by 5.79 and 5.19, respectively.

Over the period (February–March), the month-on-month transport index increased by 1.49, mainly due to a rise in the prices of diesel and petrol by 5.8 per cent and 6.57 per cent, respectively.

Business
1 year ago
Post a comment
WATCH: The latest videos from the Star
by MARTIN MWITA Business Writer
Kenya
15 April 2021 - 04:00
Read The E-Paper