The move sets the stage for duty and quota-free market access between the two countries.

•This comes even as the debate on unfair competition continues.

•Specifically, 82.6 per cent of goods and services originating from the UK will benefit from preferential access to the Kenyan market for a period of 25 years. 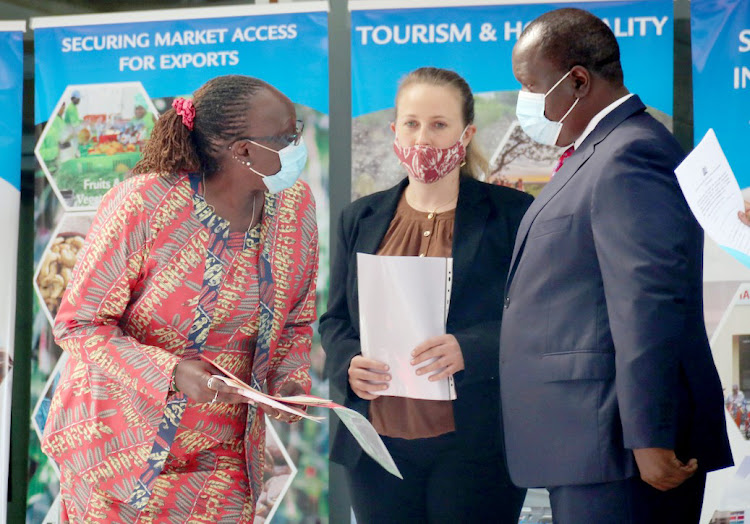 Kenya and UK have welcomed Parliament's endorsement of the Economic Partnership Agreement (EPA) between the two countries, even as the debate on unfair competition continues.

“Pleased our Economic Partnership Agreement has passed through both the Kenya and UK Parliament. We look forward to the exchange of ratification instruments soon. This is a deal which brings significant benefits for Kenyan and British businesses, workers and economies,” UK High Commissioner to Kenya, Jane Marriott,said on Wednesday.

Trade between the two countries is already worth Sh200 billion a year, she  tweeted.

“We are excited about the opportunity to build on that. With our Kenyan counterparts and businesses, we will be explaining more the benefits of this EPA for our countries,” Marriott said.

Kenya's Industrialisation, Trade and Enterprise Development Cabinet Secretary Betty Maina wrote: “Hongera (congratulation) to the Parliaments of Kenya and the United Kingdom for ratification of this important agreement that supports mutually beneficial trade and development. Stronger together.”

The Kenya Small-Scale Farmer Forum and Econews Africa moved court to stop the ratification citing a lack of public participation.

The high cost of production in Kenya has raised questions over unfair competition from cheaper imports from the UK, a trend that already exists with Chinese imports that have flooded the local market.

Specifically, 82.6 per cent of goods and services originating from the UK will benefit from preferential access to the Kenyan market for a period of 25 years.

Seven years after the entry into force of the agreement, there will be a reduction of basic duty on UK imports to 80 per cent. 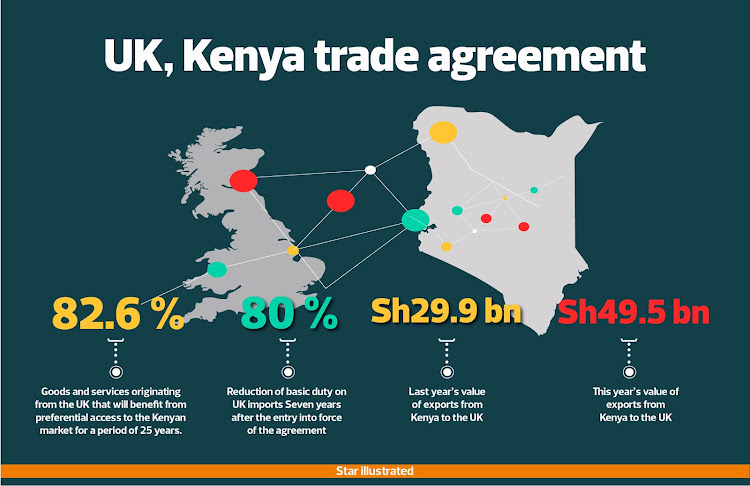 Between seven and fifteen years, the duty will be reduced from between 80 per cent (after seven years) to 10 per cent (fourteen years after the entry into force of the agreement), with a final abolishment after 15 years.

In February,the UK House of Lords delayed the ratification for three weeks over concerns that the deal may threaten East Africa Community (EAC) integration efforts.

Local farmers who moved to court have expressed concerns that the deal will hurt their products, which will have to compete with those from the UK.

The ministry has however defended the deal saying it has specific provisions protecting the local market from unfair competition from UK producers, and equally protects the EAC.

There would be room for a review after one year, a time when Kenya can opt-out if dissatisfied, with a total review allowed every five years, the ministry notes.

An array of agriculture products have been protected in favour of Kenya, where imports from the UK will not be exempted duty, whether in raw and processed form.

Kenyan exports will however enjoy quota-free access with vegetable exports commanding a 43 per cent share of the UK market, as well as cut flowers at nine per cent.

There are approximately 2,500 UK businesses exporting goods to Kenya each year, with last year’s total exports valued at Sh29.9 billion, according to the latest Kenya National Bureau of Statistics–Leading Economic Indicators.

This is a deal which brings significant benefits for Kenyan and British businesses, workers and economies

The value of exports from Kenya to the UK totaled Sh49.5 billion, meaning the trade is currently in favour of Kenya.

Kenya has committed to progressively liberalize 82.6 per cent of its trade with the UK over a period of 25 years.
Business
1 month ago
by MARTIN MWITA Business Writer
Kenya
10 March 2021 - 17:00