•Uganda exports at least 90 per cent of its maize to Kenya with a cumulative average of 330,620 tonnes

•Kenya says the aflatoxin level in the maize imports from Uganda is way above the recommended ten parts per billion. 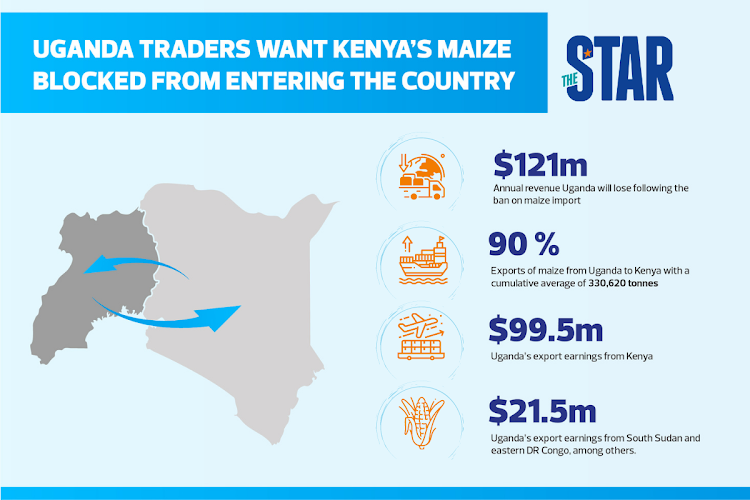 The association has written to all its members calling for their support even as the crisis saw lorries ferrying maize from Uganda blocked at the border.

The move comes three days after the Agriculture and Food Authority (AFA) banned maize imports from Uganda and Tanzania saying it is unfit for human consumption due to high levels of aflatoxins.

The Ugandan traders said they have written to the necessary government ministries in their home country for necessary action.

In the letter signed by the association's chairperson Godfrey Ongwabe and copied to various ministries, they are seeking to stop imports of Kenyan maize into their country.

Ongwabe called on maize traders and other  traders in other sectors to join in the push for fair trade among the East Africa countries.

In January, Kenya banned the importation of  poultry and beef products from the regional trade partners

“We are opting to stop the movement of cargo from Kenya to Uganda in order to address the current plight and this is done for the good of cross border trade,” said Ongwabe.

Quoting date from the Bank of Uganda the Daily Monitor said the  ban on maize will see Uganda lose an average of $121m  in annual revenue.

Of the $121m export earnings, $99.5m came from Kenya while the rest was realised from South Sudan and eastern DR Congo, among others.

In the notice signed by AFA acting director Kello Harsama, tests done on the imports had indicated the presence of aflatoxins and fumonisins which are carcinogenic.

Kello added that in January the country imported over 450,000 90kg bags maize from the two countries and another 300,000 bags in February.

“The Agriculture and Food Authority has been conducting surveillance on safety of food imports to Kenya and test results from Uganda and Tanzania has proved high levels of mycotoxins,”

“To this end, the authority has stopped any further imports of maize into the country but we are committed to facilitating safe trade of the produce,” reads the statement in part.

Kello confirmed the move and blamed it on some traders who were importing maize without following the laid down regulations.

He said that tests conducted in University of Nairobi had shown that the aflatoxin levels were over 2,000 times higher than the recommended standards.

He termed the produce as poisonous for both human and livestock consumption adding that the ban would remain in place until the traders met the set standards.

The director was however quick to note that the move would not affect the relationship and free trade between Kenya and the two countries.

“We want any trader involved in importation of maize to have a certificate of aflatoxin from the country of origin before we can allow the product in the country,” he said.