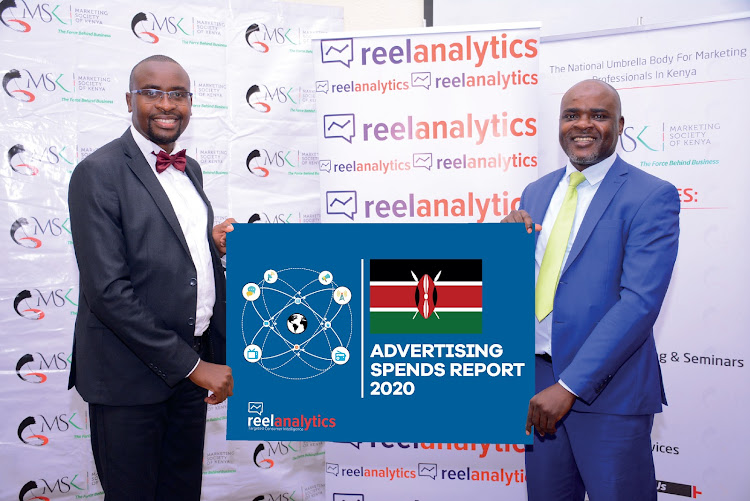 Advertising expenditure dropped by Sh31.8 billion in 2020 as coronavirus muted revenues for firms, forcing them to slash operating expenses.

The 2020 Advertising Spends report by  Reelanalytics and Marketing Society of Kenya (MSK) released Wednesday shows  annual ad spend in the country dropped by 21 per cent to Sh122.3 billion compared to Sh154.1 billion in 2019.

“Almost all sectors of the economy were adversely affected by Covid-19. The top most affected sectors were; communication, media and finance Reelanalytics senior researcher Enock Mokaya said.

Media was the biggest spender for the year 2020 with rate card advertising valued at Sh17.7 billion followed by finance at Sh16.5 billion, as communication came third at Sh16.3 billion.

The high ad spend by media is highly attributed to self-advertising which accounted for more than 12 per cent of the total ad spend rate card value.

“Whereas the exact number of free airtime can only be accurately determined by individual media houses, there was in excess of Sh8.2 billion rate card value spends that can be directly attributed to self-advertising as well as unpaid for Covid-19 related advertising during the period under review,” Mokaya said.

New rules set by the government last year to restrict advertisement hours by the betting industry took greatly affected gambling firms that recorded the biggest slump in ad spends for the review period.

Advertising expenditure by betting and gambling firms dropped by 68 per cent to Sh9.9 Billion  compared to Sh30.4 Billion in 2019.

The country’s social industry recorded a 325 per cent rise, the highest growth in ad expenditure for all sectors in the year largely driven by huge campaigns by the state and private firms on Covid-19 awareness campaigns..

Other industries that recorded growth in expenditure were agriculture by 17 per cent and personal care by  six per cent.

Other firms that recorded increased advertising expenditure in 2020 were GlaxoSmithKline by 128 per cent, Standard Group by 41 per cent and KCB bank by 18 per cent.

Finance and beverage Industries increased their expenditure in outdoor advertising by an average of 2 per cent in 2020.

In spite of ravaging effects of Covid-19, EABL dominated The Out of Home (OOH) space advancing their different brands across the country by utilising different platforms for maximum reach.

The pandemic also led to a shift in TV media consumption compared to radio as advertising activity was highest on TV, growing marginally by a percentage  year on year.

Radio consumption declined by 10 per cent compared to 2019.

This was due to a growing desire by youthful population to get updates and follow developments around the pandemic from various parts of the world.

Internet consumption on WhatsApp was the highest at 36 per cent in 2020 compared to 32 per cent the previous year.

Facebook internet use grew from 31 per cent to 35 per cent in 2o2o while Twitter came third retaining 10 per cent use to take YouTube’s 2019 position after internet consumption dropped from 12 per cent in 2019 to 7 per cent last year.