Kenya has committed to progressively liberalise 82.6 per cent of its trade with the UK over a period of 25 years.

•The pact which remains open to other regional states seeks to have customs duties applicable to products originating in the UK progressively abolished.

•The first move is the reduction of basic duty on UK imports to 80 per cent, seven years after the entry into force of the agreement. 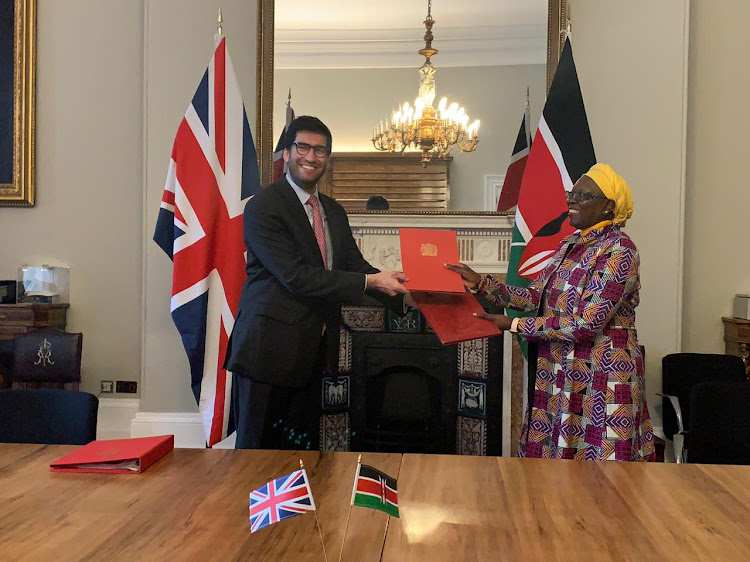 UK's International Trade Minister Ranil Jayawardena with Industrialisation and Trade CS Betty Maina during the signing of the EPA on December 8, 2020/FILE

Kenya's Economic Partnership Agreement (EPA) with the UK has specific provisions protecting the local market from unfair competition from UK producers, the government has said.

It equally protects the East African Community (EAC), according to Kenya’s Trade ministry, this as parliaments from the two countries move to ratify the deal signed last December.

The pact which remains open to other regional states seeks to have customs duties applicable to products originating in the UK into the EAC partner states, progressively abolished, a move that has raised the question of unfair competition.

What the UK is providing for Kenya and the EAC is a secure, long-term and predictable basis for deepening their access to the UK market

The first move is the reduction of basic duty on UK imports to 80 per cent, seven years after the entry into force of the agreement, with a final abolishment after 15 years.

Between seven and fifteen years, the duty will be reduced from between 80 per cent (after seven years) to 10 percent (fourteen years after the entry into force of the agreement).

It however provides a platform for reviewing sections of the trade pact and mechanism to resolve issues arising from an aggrieved party, which is expected to play out in the ratification process currently underway.

The two countries continue to “provisionally” use the EPA after UK exiting the European Union on December 31.

The high cost of production in Kenya has raised questions over unfair competition from cheaper imports from the UK, a trend that already exists with Chinese imports that have flooded the local market.

There are approximately 2,500 UK businesses exporting goods to Kenya each year, with last year’s total exports to valued at Sh29.9 billion.

The UK market accounts for 43 per cent of total exports of vegetables from Kenya as well as at least nine per cent of cut flowers.

According to the latest Kenya National Bureau of Statistics–Leading Economic Indicators, the value of exports from Kenya to the UK totaled Sh49.5 billion, meaning the trade is currently in favour of Kenya.

China however remains the biggest trading partner with an annual import bill of over Sh371.5 billion last year.

On Monday evening, the State Department for Trade and Enterprise Development said the dealbetween Kenya and the United Kingdom in December 2020 “will ensure that both countries reap the benefits of improved market access.”

“What the UK is providing for Kenya and the EAC is a secure, long-term and predictable basis for deepening their access to the UK market.” The state department said in a statement.

Free access of UK goods to the Kenyan and EAC market will be subject to a progressive and graduation duty and quota reduction that will be implemented over 25 years, Mwakio noted.

“In this respect, Kenya has committed to progressively liberalize 82.6 per cent of its trade with the UK over a period of 25 years but with a moratorium of seven years,” said the statement.

This means that the gradual duty reduction for UK goods imported into Kenya and EAC will only start after seven years.

Goods that attract 25 per cent or more duty when being imported into Kenya and other EAC Partner States account for only 2.6 per cent of total trade that was subject to liberalisation under the EPA, the ministry has noted.

Liberalisation of these products commences 12 years after the Kenya-UK EPA enters into force and takes place gradually over 13-year period, it said.

These are finished products that are considered to have minimal negative impact on Kenya and other EAC Partner States.

Any industries that may be producing similar goods in Kenya and other EAC Partners, will have 12 years before liberalisation starts to adjust.

According to the ministry, a moratorium, together with the phased reduction of duties, is considered necessary to protect Kenya’s industry, particularly the manufacturing sector, which is less developed and competitive than the UK industry.

“The agreement also has inbuilt mechanisms for protecting infant industries and the economies of Kenya and the EAC. These are the provisions being discussed by Parliaments of the two countries as they move to ratify the EPA,” Mwakio noted.

Kenya had to go alone to secure market for her exports as her neighbours are still enjoying quota free-duty free access as Least Developed Countries (LDCs), which are allowed access for 'everything but arms' (EBA), without having to provide free access to EU products in return.

According to UNCTAD, no LDC country in the EAC is expected to graduate from this status until at least 2024.

However, should a LDC graduate and therefore lose access to the 'everything but arms' preferential trade scheme, it could join the EPA at any time, with Kenya calling on her peers to come on board.

“This will provide the strongest possible platform for the United Kingdom, Kenya and, ultimately, the whole EAC, to expand our trading, investment, tourism and historical relationships in the future,” CS Maina said.

Companies operating in Kenya to benefit from duty-free access to the UK market.
News
2 years ago
Post a comment
WATCH: The latest videos from the Star
by MARTIN MWITA Business Writer
Kenya
23 February 2021 - 15:00
Read The E-Paper