Pain for Kenyans as banks go after loan defaulters

Auctioneers having a field day as households and businesses reel from effects of Covid-19.

•Cars are among the most hit assets with others being industrial and household equipment.

•The number of borrowers defaulting on loan repayment has reached a new decade high of 15 per cent. 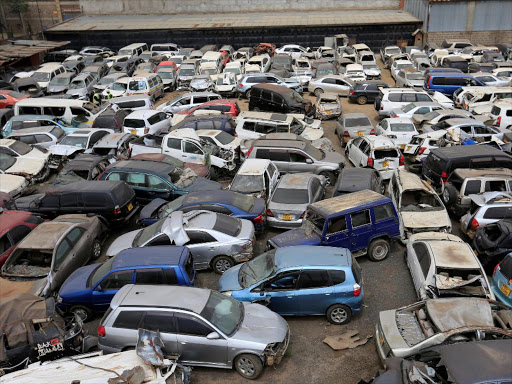 Vehicles for auction at the Leakey's auctioneers yard in Nairobi/FILE

Thousands of households and individuals are at pains as banks move to recover assets from loan defaulters, amidst the Covid-19 pandemic that has hard hit the economy.

This, as Kenyan banks' credit profiles continue to face significant risk from the economic impact of the pandemic, with the the sector's non-performing loans (NPL) ratio set to rise to a historic high past the 15 per cent projected for last year.

Most hit assets are cars with others being industrial and household equipment where owners are facing the auctioneers' hummer.

Home owners are also on the receiving end as banks close in on mortgage defaulters, as default rate soar in the wake of Covid.

It is expected to worsen than 2019, when default on mortgages jumped 41 per cent to Sh38 billion, occasioned by salary cuts and job losses witnessed last year.

In 2019, unpaid mortgages increased by Sh11.2 billion , a rise that outpaced other segments like manufacturing (19 per cent), traders (4 per cent) and personal loans (six per cent) in growth of default on loans.

Buyers of cars through bank financing, whom are yet to clear payments, are among the most affected this year, in a trend that started last year,  with auction advertisements being a norm in the dailies.

For instance today, Startruck Auctioneers is auctioning 221 units in Nairobi, Mombasa, Kitale and Eldoret, in a mix of personal and commercial vehicles.

Most are units registered between 2019 and last year, when Covid ravaged the economy leading to closure of businesses and loss of millions of jobs across different sectors.

“..duly instructed by our principals, the financiers we shall sell the repossessed motor vehicles by public auction on Friday 8, January 2021,” the firm says in a public notice, “sale is subject to a reasonable reserve prices.”

Stanbic Bank and NCBA Group recently recovered 72 cars and 51 cars, respectively, which were sent for the hammer, as the lenders moved to recover the units from loan defaulters.

Taxi drivers operating on ride-hailing apps such as Uber, Bolt, and Little are among those most affected.

In 2018, Stanbic Bank entered a partnership with Uber and CMC Motors to offer drivers with Sh835,000 low-cost vehicles at 14 per cent interest, payable over three years.

Most taxi drivers have however struggled since the onset of the pandemic, March last year, which saw introduction of the night curfew that has reduced their operating hours, hence low returns from the business.

“Things have not been normal. Many drivers are loosing their cars,” Kenneth Kamau, a Bolt driver told the Star.

Robert Ndegwa, a Nairobi-based car dealer , of The Car Guy Kenya company, yesterday noted there is a sizable number of buyers across the market who are struggling to repay car loans financed by banks.

“I figure it could be tough for individuals during this pandemic period..mostly the one's who depend on their salary to clear payments,” he said, noting that as a dealer, he has been advising buyers “accordingly so as to avoid such.”

“We always advise against banking on salaries and to have at least a one year advance payment plan,” Ndegwa said.

A huge number of saloon cars being auctioned are of between 1000cc and 1300cc, preferred for taxi businesses and low income earners, due to their low consumption.

With almost 50 per cent of the banking sector loan book restructured, a proportion of these restructured loans are likely to become non-performing, Financial Risk Analyst Mihr Thakar has noted.

“Banks will need to be quick to classify bad loans outside any concessions as such and dispose of security assets held to raise cash and continue to pay dividends at the least, and continue as a going concern at the most,” Thakar said.

He noted that regulations on disposal of security assets that work as price floors will pose a further risk to liquidity for lenders.

Last year, banks advanced loan restructuring options for individuals and entities to help cushion them from the impact of Covid-19.

Total loans amounting to Sh1.38 trillion had been restructured (46.5 per cent of the total banking sector loan book of Sh2.97 trillion) by the end of October, in line with the emergency measures announced by CBK on March 18, to provide relief to borrowers.

Of this, personal and household loans amounting to Sh 303.1 billion (36.1 per cent of the gross loans to this sector) had their repayment period extended.

For other sectors, a total of Sh1.08 trillion had been restructured mainly to trade (18.7 per cent), manufacturing (22.7 per cent), real estate (14.5 per cent) and agriculture (12.8 per cent), Central Bank of Kenya data indicates.

The number of borrowers defaulting on loan repayment however reached a new decade high of 15 per cent.

Kenya’s highest NPL was reported in November 2001 at 33.4 per cent while the lowest debt default rate in the country’s history is at 3.5 per cent reported in 2012.