Tourism sector struggles as 2020 comes to an end

Sector most hit with more than 3.1 million jobs affected.

•Tourism CS Najib Balala has projected tourism earnings for this year will be down by 80 per cent as global travel and local conferences remain restrained by the Covid-19 pandemic.

•This translates to about Sh130.9 billion based on 2019 total industry revenues, as international arrivals remain low with a 90 per cent fall. 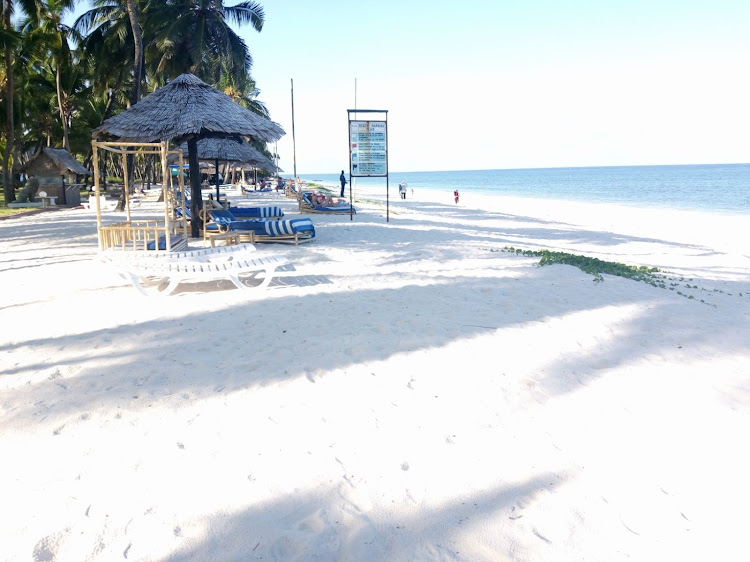 It was a warm Thursday morning on April 2, when Catherine Mwagha a hotelier was summoned into her boss's office.

At the time, she was a supervisor at a hotel in Mombasa's North Coast, a popular region for domestic and international holiday makers.

Having worked in the industry for over ten years, the mother of two had settled well in the hospitality sector which has for decades been among the lead employers at the Coast.

Her life would change in three weeks after the first Covid-19 case was reported in the country, which was followed by a crumble of the tourism industry as global and domestic travel came to a halt.

"He was straight to the point...We have to let workers go because business has become unsustainable," Mwagha recalls the shocking news that sent her packing.

"We were about 12 staff members who were affected at that point," says Mwagha who is now surviving on casual jobs in Mombasa.

Maureen Wanjiku, a Nairobi based travel agent, was also let go from employment in March as international tourists stopped flowing.

The two are among more than 3.1 million employees in the tourism and travel industry who were affected this year as Covid-19 ravaged the economy.

The sector has been singled out as the most hit in the economy by the pandemic which has caused havoc in the country since March.

This, as the virus' effects pushed the globe into the deepest recession since the Second World War, with the World Bank forecasting global economy will shrink by 5.2 per cent.

When the first case was reported in the country on March 12,it was the start of an unseen turmoil that would push the country into a deep end, with the economy projected to grow by a meagre 0.6 per cent

This is from an average 6.1 per cent that had been predicted in the first quarter of the year, with tourism traditionally being a key driver of the economy.

When the year begun, Tourism and Wildlife Cabinet Secretary Najib Balala had big plans as he projected a growth in numbers by 10 per cent from the 2, 048,833 total arrivals registered last year, with earnings equally growing.

“We expected to earn almost Sh189 billion in 2020-21,” Balala says, which is growth from the ShSh163.6 billion generated from the industry last year.

While the first two months had started well with 170,908 arrivals in January, 150,968 (February) and 67,819 visitors in March, the tourism industry hit a snug in April after Covid-19 found its way into the country with the first case reported on March 12.

The government suspended all international flights on March 25, while locally, movement in and out of the Nairobi metropolitan area, Mombasa, Kilifi and Kwale counties was stopped.

A survey by the Kenya Private Sector Alliance(Kepsa) released in June indicated at least 5,991,768 direct and indirect jobs had either been lost or workers sent home on unpaid leave as companies and businesses mitigated effects of the virus.

Travel and tourism was the most hit with 3.1 million jobs affected including hotel employees, pubs and restaurants, tour operators, airlines, travel agents and their related suppliers and support services.

About 2.3 million employees were sent home on unpaid leave with most hotel employees on 50 per cent pay with most businesses considering redundancies from June onwards according to a Kenya Prvate Sector Report.

“There was no tourism. We all had to focus on mitigating the spread of the virus and handling the pandemic,” Kenya Tourism Federation(KTF) chairman Mohammed Hersi told the Star in an interview.

According to the survey titled 'Assessing the Covid-19 impact on businesses, jobs and opportunities for faster recovery', conducted between September and October, by Kepsa, tourism remained the most hit.

In tourism, all surveyed firms reported inability to pay employees salaries with 92 per cent saying they have lost customers.

Increased liquidity challenges in the sector was also at 92, while 75 per cent closed as a result of the government directives and challenges accessing markets.

The disruption on global travel has since seen international arrivals to Kenya between January to October drop by 72 per cent.

Though monthly arrivals have started to increase months after resumption of international travel (on August 1) and domestic travel which resumed on July 15, the sector is not yet out of the woods, according to Balala.

International arrivals was recorded at 14,049 in August before picking to 26,018 in September, then 38, 894 in October, mainly business visitors.

The numbers have continued to increase as the festive season sets in.

“We are not out of the woods yet, but we are optimistic the situation will gradually improve once the vaccines being developed become readily available to the masses,'' Balala said.

He has projected projected tourism earnings for this year will be down by 80 per cent as global travel and local conferences remain restrained by the Covid-19 pandemic.

This translates to about Sh130.9 billion based on 2019 total industry revenues.

Between March and June, the country lost 50 per cent of total annual tourism earnings which is about Sh81.8 billion

The Ministry of Tourism and Wildlife, in mid-March 2020, set aside Sh500 million for the country’s post coronavirus recovery plan.

This is part of the government's plans to support recovery of the sector which contributes about 8.8 per cent to the annual GDP, and a key foreign exchange earner.

Currently, both the government and the private sector are counting on the domestic market to help cushion the industry from collapse, and support its recovery.

In this context, President Uhuru Kenyatta has been calling on Kenyans to travel across the country.

According to the President, Kenyans must commit to take their holidays locally for the next one year, a move that will rescue the industry.

"I want to take this opportunity to encourage every single Kenyan to take advantage and to travel...You can travel, you can move," the President said during a virtual event.

The ministry is also marketing the country with the help of athletes (sport tourism) among them being legend marathoner Eliud Kipchoge, whom Kenya Tourism Board in July engaged on a six-month contract for the campaign.

As the December and New Year festivities sets in, hotels and industry players are hoping to make up for the lost days when the industry came to a stand-still.

Most hotels at the coast and parks have reported good business with occupancy ranging between 50-90 per cent over the Christmas and new year week.

“We are hoping for some business but it will be a cautious festive season as we continue to manage the pandemic,” Hersi said, “It will not be as usual.”

Hotel bookings pick up as Kenyans warm up for holidays