Armed with passion and determination but nowhere to sleep, he was forced to sleep in a wooden greenhouse, competing with his tomatoes for air and space. 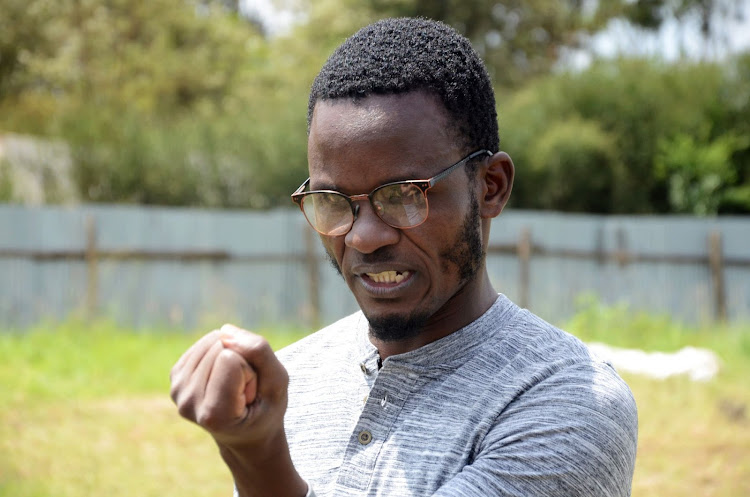 Michael Ouma recalls his struggles back in Migori County where tough life forced him into 'hustling' while still in form two to support his parents who depended solely on small scale farming for survival.

The staunch Catholic who harboured ambitions of becoming a priest spent most of his time in church helping priests who offered to pay his fees at Rapogi High School.

It is at Rapogi where the 33-year-old horned entrepreneurial and resource mobilization skills.

''During school holiday, I could mobilize my village agemates for soccer tournaments to sensitize the community, especially on HIV/AIDS. This, we did with support from funders in Europe,'' Ouma told the Star at his farm in Juja.

The more he interacted with the community, the better he understood challenges facing households.

'' production was a big issue. They keep tilling tired soils for survival. When I got That has kept them in a poverty cycle. I want to change that,'' Ouma who now runs a successful agricultural consultancy firm, Groliva said.

Ouma is simple and smart. However, behind his simplicity lies a high-density profile. From having a chat with President Uhuru Kenyatta, MasterCard Foundation chair, consulting for UN agencies and earning close to Sh4 million per year.

Even so, it has not been an easy sail for the Young African Leaders Initiative (YALI) alumni. After earning an agricultural diploma from Kisii Agricultural Centre, he relocated to Juja where he had gotten support from friends in the Netherlands to venture into hydroponic farming.

Armed with passion and determination but nowhere to sleep, Ouma was initially forced to sleep in a wooden greenhouse, competing with his tomatoes for air.

''It was tough. This place was bushy and hyenas were roaming. I, however, thank God for the process and key partners like KCB Foundation, Mastercard, GIZ, Miramar International College (MIC) in Kikuyu among others,'' Ouma said.

''I came to learn about KCB 2Jiajiri programme in March 2018. After a successful application, a team from BSD visited my farm and things changed for good''.

After training at Miramar International College (MIC, I applied skills learnt and I have become an expert in hydroponic. It is a solution to the food crisis in the world,'' Ouma said.

''I currently consult for 30 clients, including UN agencies in Kakuma Refugee Camp. I harvest at least 25 tonnes of tomatoes per season worth Sh1.5 million. Once my lease expires here, I want to take the technology to Migori,'' Ouma said.

He has a dream to empower youths in the continent and preach the 'farming is the cool gospel.

According to him, the young and energetic human resource needed for agricultural production is wasting in urban centres.

''We need to teach young people that agriculture pays handsomely. We should also apply modern technology in agriculture in order to maximize production and address food insecurity,'' Ouma said.

When the Star visited his farm, young people were busy erecting modern greenhouses which he secured through funding aided by KCB Foundation and MasterCard.

''This programme has been a blessing to me and thousands of direct and indirect beneficiaries. It gives you a rod and teaches you how to fish. These are skills that will see Africa achieve most of sustainable Development Goals (SDGs).

The main objective of 2Jiajiri programme is to empower and equip unemployed and out-of-school youth to grow micro-enterprises by providing them with technical skill training opportunities.

It also offers mentorship and enterprise management support interventions designed to spur the growth and development of Small and Micro Enterprises (SMEs).

These interventions are calibrated to promote the growth of SMEs so that they in turn can create jobs, KCB notes.

Currently, the programme formalises the informal sector through a phase approach wherein Phase I, it addresses the lack of technical skills in the market.

This is through sponsoring training for new students in technical training institutions and for workers who already have skills to improve them and learn how to work using advanced tools.

It also up skills and certifying existing micro-entrepreneurs who wish to move their business from the informal to the formal sector.

Ouma is now pairing his psychological credential, hydroponic skills and soccer coaching skills to win young people in Africa towards loving agriculture, one after another.