Harpic and Sanergy to up toilets in Mukuru and Mathare

The sanitation actors say improving Kenya’s state of sanitation requires more inclusive approaches and partnerships to save the country’s poorest, most remote, and the most marginalised populations 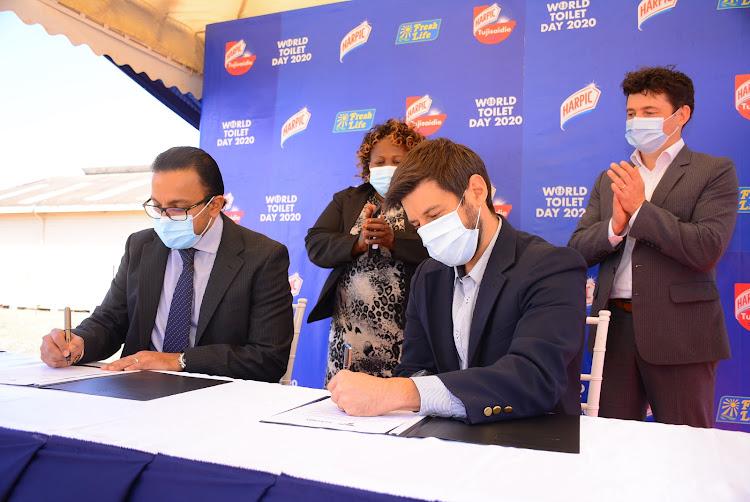 The partnership will map out and develop effective campaigns to boost awareness on the urgent need of adopting sustainable sanitation solutions across the country as they seek to lift up ten thousand Kenyans currently still living without access to safely managed sanitation.

“Africa's cities are growing at an unprecedented rate.  In Kenya alone, the urban population is well over 10 million and this is definitely going further up with an accelerated rate of rural to urban migration,'' Varma said.

This rapid urbanisation, he said, has huge implications for waste management in the country’s cities, which already face pressing water and sanitation demands.

UNICEF ranks Kenya as the third-largest country in terms of the number of people drinking water from contaminated sources in Sub-Saharan Africa, with more than 9.4 million Kenyans reportedly drinking directly from contaminated water sources.

Consequently, the economy loses an estimated Sh. 27 billion annually with more than 36,000 deaths recorded every year due to poor sanitation.

It is projected that the urban population with inadequate housing and basic services is could double to two billion by 2030.

Sanergy is building bold solutions for these cities – aiming to build healthy and prosperous communities. At the same time, we are always excited to work with partners such as Reckitt Benckiser to scale our reach and impact,”  Sanergy co-founder David Auerbach said.

The social enterprise has developed a circular economy approach to delivering safe sanitation services. They design, build and distribute sanitation products and services to urban residents via a monthly subscription.

On a regular basis, they professionally remove the waste generated and transports it to their organics recycling factory, where it is treated and upcycled into high-quality agricultural inputs and clean energy.