Kenya could fail to repay its debt by 2025 - report

Most of China’s credit clauses have a Build Operate Transfer (BOT) model and may require collateral in case of shaky feasibilities. 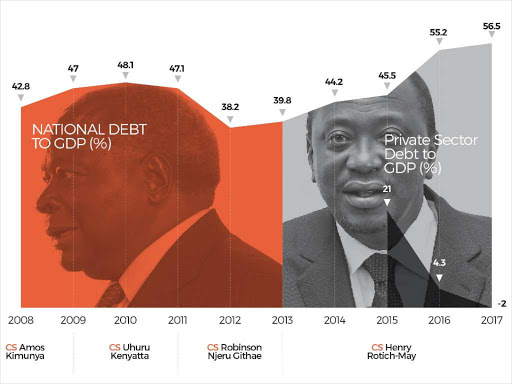 Kenya is listed among countries likely to default on external loans in the next five years, risking strategic assets used as collaterals.

A report by  IHS Markit titled ‘Investors fret over sovereign bankruptcies in coming years’ compiled by the Financial Times shows Kenya's probability of defaulting has grown to 35 per cent.

Argentina tops the list with a probability of 55 per cent, Angola 52 per cent, Pakistan 48 per cent, Iraq 45 per cent and Cameroon 42 per cent.

Others with an above 30 per cent probability are Ghana at 35 per cent, Bolivia 32 per cent, Nigeria and Ukraine at 30 per cent.

Zambia is the latest country to default on sovereign debt as reported by Financial Times on Monday, joining Ecuador, Lebanon, Belize and Suriname after talks with creditors flopped.

Although debt restructuring has been the most suitable way of addressing defaults, creditors are becoming hesitant, with Chinese lenders ruling it out as an option.

The Public Debt Management report 2019/20 by the National Treasury shows debt from China accounts for 20.5 per cent of the country’s total external debt, highest after that from the International Development Association (IDA), which accounts for 24.8 per cent.

These are largely infrastructure-related loans, with most of them linked to the Standard Gauge Railway (SGR).

This year alone, Kenya is seeking $888 million (Sh95 billion) in interest and principal instalments to pay off loans from the Chinese government, China Exim Bank and the China Development Bank.

Majority of external lenders are members of the Paris Club, a group of officials from major lending countries.

It's main role is to find coordinated and sustainable solutions to the payment difficulties experienced by debtor countries. China is not a member of the group.

Most of China’s credit clauses have a Build Operate Transfer (BOT) model and may require collateral.

In 2018, President Uhuru Kenyatta dismissed media claims that Kenya had used the Mombasa port as collateral for SGR loans from China.

He promised to share a credit agreement between the two countries but to date he has not done so.

In 2017, the Sri Lankan government was forced to relinquish majority control over the port of Hambantota to China in lieu of repayment after defaulting.

According to Standard & Poor’s (S&P), Chinese loans are secured by strategically important natural assets with high long-term value as in the case with Djibouti.

In 2018, China set its first overseas military base in the tiny African nation after funding numerous infrastructure projects including a new port, two new airports and the Ethiopia-Djibouti railway.

Kenya's current external debt obligation spans to 2090, with  62 pending external loans whose payments are staggered over a number of years.

A 2019 external debt profile by National Treasury puts the combined tenure of the 62 loans to 1,062 years.

Although both international and local experts have cautioned against Kenya’s debt sustainability, Treasury has maintained that borrowing is within a manageable frame.

Last year, Gatundu South MP Moses Kuria claimed that the National Assembly Budget Committee — of which he was part — abdicated its oversight role and lied about the true extent of the country’s debt crisis.

Even so, the government's debt appetite seems far from over.

It has for instance plans to borrow more this financial year to fund additional budget needs in the revised budget for 2020/21.

According to the 2020 Budget Review and Outlook Paper tabled by National Treasury Cabinet Secretary Ukur Yatani in parliament, the country will borrow Sh1.002 trillion in the current financial year to meet the additional Sh200 billion expenditure.

This, despite lowering domestic revenue collection target by the Kenya Revenue Authority (KRA) to Sh1.6 trillion from Sh1.63 trillion set in June.

The country's total debt is currently at Sh7.06 trillion according to the Central Bank of Kenya.