He wants the regulator held liable for negligence and poor oversight 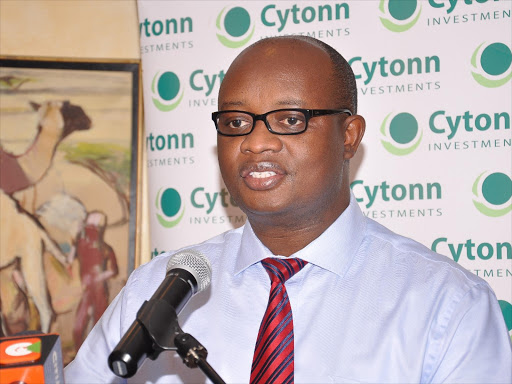 An investor is threatening to sue Cytonn Investments and the Capital Markets Authority (CMA) for allegedly misleading him to put Sh3 million into a wrong product.

Kenneth Kisanga, in his demand letter filed at the High Court in Nakuru, says Cytonn marketed the Cytonn’s High Yield Solution as a private offer with  exciting returns while knowing it was a public offer with limited authority.

However, Cytonn Investment CEO Edwin Dande says CMA is mixing issues in a desperate attempt to dent the image of the firm.

According to him, the trouble with CMA started on June 2, 2020, when the regulator sent a letter asking them to limit investments by Cytonn High Yield Fund (CHYF) into real estate managed by Cytonn to no more than 10 per cent of the fund.

Kisanga says Cytonn last October, Cytonn induced him to invest in what he thought was a privately placed product operating under the  capital market regulations.

He was to earn a nine per cent interest in a year-long investment due for maturity on October 8, 2020.

Unknown to him, he had invested in a publicly placed product that gave the issuer flexible authority over the investment, including the freedom to extend maturity time.

He wants CMA held liable for negligence and poor oversight that saw Cytonn mislead the public to buying into the wrong product.

Kisanga avers that Cytonn is selling the product without approval from CMA an aspect that is likely to see him suffer irreparable loss if the declaration is not issued to term Cytonn High Yield Solutions (CHYS) as a public offer.

He also wants Cytonn compelled to pay him the agreed monthly interests and the total amount of his investment upon maturity. He is also demanding general damages for the breach of contract, cost and interests.

This is a new twist to the ongoing court wrangles between CMA and Cytonn over Cytonn High Yield Solutions.

In January, CMA requested that the CHY reduce its investments into Cytonn -related projects to 10 per cent of the fund’s total assets under management (AUMs) as per regulations to minimise risks and protect investors.

However, Cytonn moved to court seeking to fight the 10 per cent limit in an ongoing case.

On Friday last week, 13 investors filed complaints with CMA against Cytonn for failure to pay Sh122.8 million upon maturity of funds in one of its pools.

The 13 investors claimed Cytonn has delayed payments of between Sh500,000 and Sh25 million, prompting the regulator to petition the courts in the push to bar Cytonn from putting more cash in real estate projects.

The regulator said it was concerned that (CHYS) and debt security raised from investors dubbed Cytonn Project Notes pose risks to the investing public.

It warned that Cytonn is at risk of defaulting further on investors’ obligation, which is to pay the securities and interests on maturity.

The directive was purportedly based on the Collective Investment Schemes Regulations which only applies to investments where the fund manager, the custodian, and the trustee are related.

He explains that in the case of CHYF, the Trustee is National Bank, the Fund Manager is Cytonn Asset Managers Limited, and the custodian, SBM Bank Kenya are not related companies

''We held discussions with CMA to try and get them to retract their letter but the discussions did not yield much. This forced us to go to court which issued a stay order on September 21,'' Dande said.

According to him, this angered CMA which authored another letter, touching on another product, CHYS, not regulated by the former and has nothing to do with the matter in court.

''CHYS is a fund invested in real estate and whose board of investors approved an extension of maturities by 12 months for pre-Covid funds. Out of 4,000 investors, about 13 of them were unhappy and approached CMA,'' Dande said.