Most staff were qualified for flight resumption

•Chief human resources officer Evelyne Munyoki  says termination of contract is as a result of effects of Covid-19 which have reduced operations. 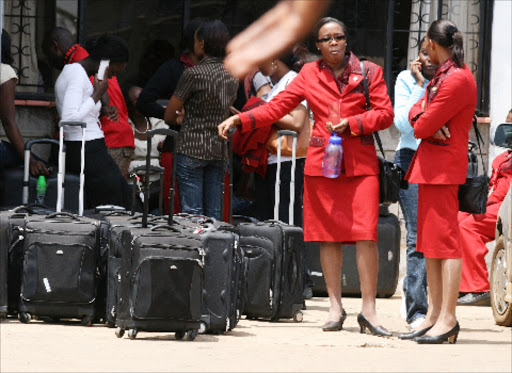 Kenya Airways' staff cuts will see total of 1,500 employees sent home  and on Tuesday the airline served 400 workers with redundancy letters in the second phase of the layoffs.

This comes at a time when the airline is gearing to resume international flights on August 1.

The majority sent home in the second phase are  cabin crew, technical team and those from the finance department.

It had earlier this month served 22 pilots with redundancy letters with at least 182 pilots targeted in the process.

About 210 employees in the latest lay-off had collected their letters by close of business, Tuesday, majority who were hired in January this year on three-years contracts..

The termination of contracts, according to chief human resources officer Evelyne Munyoki , is a result of the effects of Covid-19, which have adversely affected the airline forcing it to significantly suspend and reduce its operations.

“In the circumstances, I regret to advise you of management decision to terminate your appointment by giving you one month notice with effect from July 31, 2020,” Munyoki says in the letters seen by the Star.

The biggest challenge for KQ, however, remains operational capacity as the majority of those sent home (pilots and cabin crew) are the ones that had undergone recurrent training required to resume flying, the Star has established.

For Pilots, for instance, one is required to undergo the training if they have not had at least three takeoffs and landings in 90 days, a programme used to brush up on the skills and knowledge needed to fly transport aircraft.

KQ suspended all international flights on March 25 as Covid-19 disrupted global travel, meaning all its pilots and cabin crew were subject to recurrent training before resuming flights.

It grounded a majority of its 36 aircraft, which included nine Boeing 787 Dreamliners, 10 Boeing 737 aircraft, and 17 Embraers.

However, most of the scheduled international flights for August are likely to be short of crew, with lack of the mandatory legal re-training courses for its staff exposing the airline to cancellations.

65 per cent of KQ’s scheduled flights are likely to lack crew, a person familiar with the airlines’ operations told the Star.

“If you are not current you cannot be able to operate. It is against the law,” Kenya Airline Pilots Association (KALPA) General Secretary and CEO Captain Murithi Nyagah said in a separate inquiry by the Star.

The airline is also facing technical challenges for aircraft maintenance, which has seen it outsource services, with the most recent being its Boeing 787 Dreamliner, which went to be serviced in Jordan last month.

CEO Allan Allan Kilavuka has however insisted the airline must ‘rightsize’ to remain afloat.

“Our concern is on the survival of the Airline now and sustainability for the future as we resume operations in a highly unpredictable environment,” he said.