Decision has left airline's management at crossroads with its workers, KALPA. 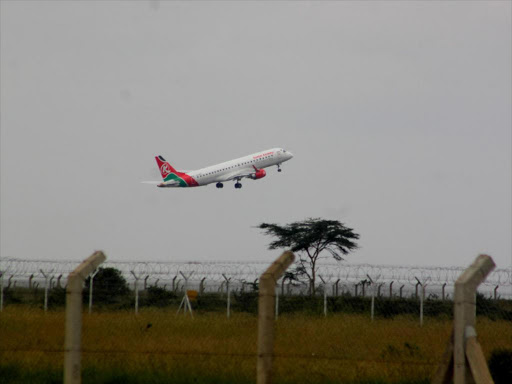 National carrier–Kenya Airways is sending home 182 pilots with more than 400 cabin crew facing job losses, the star has established, raising questions over the future of the carrier.

This, even as the government pushes for the nationalisation of the loss-making airline, which is to be managed under an Aviation Investment Corporation that also brings on board the Kenya Airport Authority.

22 pilots have already been served with redundancy letters.

160 more are on the way out with at least 400 cabin crew also on the exit in a decision that has left the airline's management at crossroads with its workers, the Kenya Airline Pilots Association (KALPA) and the Kenya Aviation Workers Union (KAWU).

“I regret to advise you of management's decision to terminate your appointment by giving you one month notice with effect from June 24, 2020,” copy of the letters given to the pilots, signed by Chief Human Resources Officer Evelyne Munyoki reads in part.

Upon returning the company properties in their possession, undergoing an exit medical check-up with Kenya Airways clinic and signing all necessary discharges, the employees will be paid final dues.

According to the letter seen by the Star, the exit package includes salary and all applicable allowances up to and including June 24, 2020, a one month's salary in lieu of notice and accrued leave days as at June 24, a move that will see the loss-making company spend millions in the layoff.

“The effects of Covid-19 have adversely affected our operations as an airline which has seen us significantly suspend and reduce our operations,” KQ, as it is known by its international code, says in the letters to pilots dated June 24, and served on June 29.

The notice to relieve workers came barely a month after CEO Allan Kilavuka sought the Labour Ministry's support in suspending the airline's collective bargaining agreement with the unions, in what is seen as a ploy to end employment at minimum possible cost.

“In view of the unprecedented impact of Covid-19 to the airline, it has become difficult to meet our obligations which severely affecting the industrial relations in the company,” Kilavuka told Labour CS Simon Chelugui.

He says the airline has held a series of engagement meetings with KALPA and KAWU which culminated into signing of Memorandum of Agreement for the month of April 2020.

The unions and KQ management, however, failed to reach agreement on operations for the months of May and June.

KQ has grounded almost all its operations save for cargo and government-approved repatriation flights.

As such, its revenues are currently at four per cent on monthly average revenues during normal operations.

“We will therefore not be able to cover salary and associated staff costs as spelt out in the CBAs,” Kilavuka says in the letter to the CS, a communication that notably excluded the unions.

He has termed union demands as “unreasonable”.

The airline has also asked staff who are not among those required during the resumption of services to proceed on unpaid leave.

“As we prepare for the anticipated resumption of domestic flight operations in Kenya, the projected depressed demand will require that we only keep the resources we will need for these operations,” Kilavuka said in an internal communique.

The move to lay-off pilots and crew now leaves the airline on the brink of costly litigations even as it remains unclear how it will afford to send the pilots home with its balance sheet in the red.

The airline reported a gross loss of 12.98 billion, a 71 per cent further drop compared to Sh7.55 billion loss the previous year.

This is despite income growing to 128.3 billion from Sh114.1 billion in 2018, raising questions over the costs which are mainly pegged on hefty payment to leases of aircraft that are majority-owned by locals with registered companies abroad.

It was last year reported being spending a whooping Sh14.7 billion annually to service leasing contracts it entered to acquire 20 aircraft.

Though management has blamed Covid-19 effects in its latest decisions, the airline has remained in losses for more than four years, with management coming under sharp criticism over the poor-performing national carrier.

It will cost the airline an average Sh30 million to send one senior captain home on full benefits with an estimated Sh5.4 billion required for the overall downsizing.

In March this year, Kenya Airways sent part of its workforce of about 4,000 employees on unpaid leave with those remaining taking pay-cuts of between 35 per cent and 75 per cent.

“We started feeling the effect in February after we stopped flying to China, then Italy and the rest followed,” Kilavuka told the Star in a recent interview.

The massive lay-offs come despite Transport CS James Macharia's assurance that the government will support the airline back to profitability and growth.

“KQ goes beyond the balance sheet and profit and losses. If you only look at these, you will never have an airline,” Macharia told the Star in a recent interview, “We shall continue supporting KQ.”

Sending hundreds of staff home also raises questions over the future of the airline which was operating on a shortage of pilots before the Covid-19 hit the global aviation industry.

It had 440 pilots flying the airline's planes daily to 55 destinations worldwide, 41 of which are in Africa, carrying over four million passengers annually.

It required about 600 pilots to operate optimally, according to KALPA, putting the shortage at around 160 pilots.

The airline is currently on course of being nationalised with the National Aviation Management Bill, 2020 seeking to create an aviation holding company under which the airline's balance sheet will be merged with Kenya Airport Authority.

The firing of staff reflects the opposite of the National Assembly Transport Committee, chaired by Pokot South MP David Pkosing, who last week said there would be no job losses.

“There will be more flights, hence more ground handlers, more hotels, more crew and so on. Nobody is targeted to lose jobs in the new structure,” the MP told the Star.

President Uhuru Kenyatta will have a key role in the management of the loss-making carrier in the proposed nationalisation plan.

He will chair a powerful National Civil Aviation Council. The council is part of the proposals to make KQ a parastatal.

Cabinet Secretaries for Transport, Interior, National Treasury as well as the Attorney General, and Kenya Airforce Commander are the proposed members of the council.

Meanwhile, the national carrier is facing a massive talent drain by Qatar Airways which is keen to move its main operations to Rwanda.

It has acquired majority stake at the new Rwanda Airport, with reports indicating the airline is keen to tap Kenyan aviation talent.

Post a comment
WATCH: The latest videos from the Star
by MARTIN MWITA Business Writer
Kenya
06 July 2020 - 04:00
Read The E-Paper