• The employers are now targeting those who had been placed on half salaries who are now been sent home without pay as key import markets remain shut.

• According to Kenya Plantations and Agricultural Workers Union (KPAWU) official Ferdinand Juma the move has left hundreds of workers penniless and jobless. 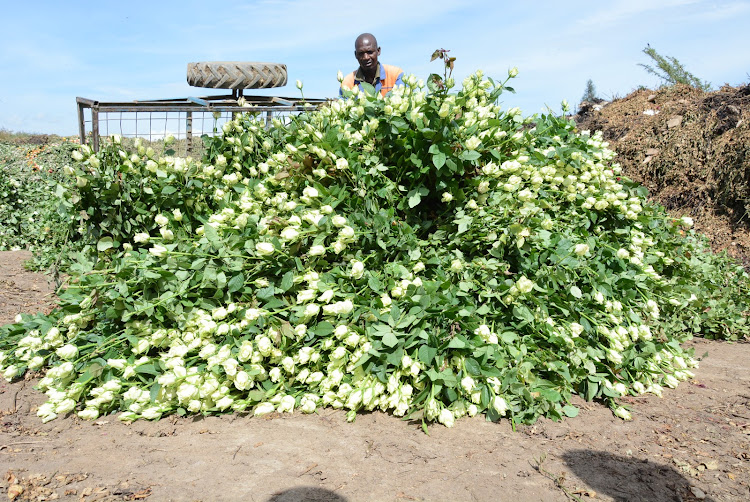 Flower crisis A worker from Maridadi flower farm dumps mature roses which were ready for export in their compost yard due to lack of market. The farm is dumping over 230,000 roses everyday due to the Corona crisis which has seen supermarkets in Europe close shop and the Dutch auction collapse.
Image: George Murage

Flower farms in Naivasha have commenced the second phase of staff layoffs as the impact of the coronavirus pandemic continues to rage their business.

The employers are now targeting those who had been placed on half salaries who are now been sent home without pay as key import markets remain shut.

Already more than 1,000 workers mainly from Oserian Limited which is among the largest flower farm in Naivasha have been sent home.

According to Kenya Plantations and Agricultural Workers Union (KPAWU) official Ferdinand Juma the move has left hundreds of workers penniless and jobless.

He said Oserian flower farm alone has sent home 750 workers who were on half-pay for the last one month.

“The farm first sent their workers on paid leave and later on half-pay as the crisis deepened but they have now been forced to send them home without pay,” he said.

Juma said that several farms had communicated their no-pay actions to the employees to their employees while others like Longonot Horticulture had called for voluntary resignation.

“In Longonot Horticulture over 200 workers have expressed their desire to resign voluntary and we are working with the management on their dues,” he said.

He said the situation in the sector that employs thousands in the country is worsening by the day. noting that more than 5,000 workers already laid off or on unpaid leave ware in dire need of food supplies.

Juma said the union had sought the help of the county and the national government in providing food rations to the affected workers.

“We are made to understand that there is a programme by the national and county governments to feed those affected by the pandemic and we appeal that the workers be considered,” he said.

Naivasha sub-county commissioner Mathioya Mbogo sai the area disaster management committee is looking at how to help the affected families.

He said that chiefs and village elders were assisting in determining and registering those in dire need of help.

“The committees involved in dealing with identifying the most affected persons have already met and we shall start distributing the food once we receive it from the government,” he said.

Mathioya said they are working closely with the county government to ensure there is no duplication in food distribution.