The summit also endorsed the outcome of the negotiations for a new 20-year ACP-EU partnership, which will be signed next year 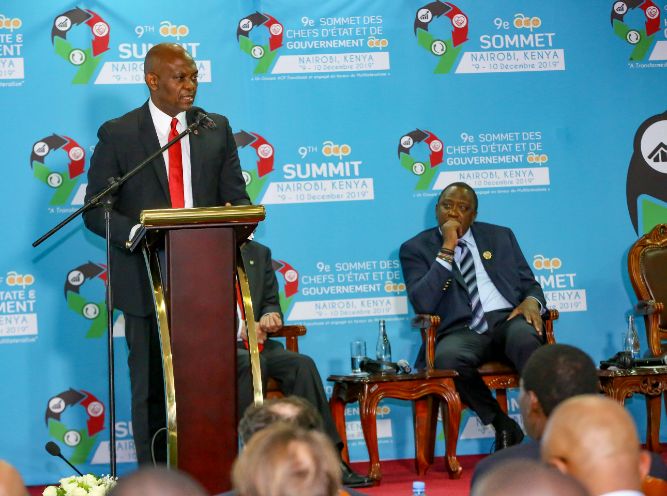 Members unanimously endorsed the Nairobi Nguvu Yetu declaration (Stronger Together), that among other things advocates for the establishment of air and sea trading routes between the three regions to increase the bloc’s global trading to 10 per cent from current three per cent in next 10 years.

Reading out the resolutions, Kenya's President Uhuru Uhuru who has assumed the block's chairmanship said the air and sea-trading link provide a good opportunity for private sector players to be champions.

‘’The air and sea trading links will be the first step of realizing our long term goal of increasing ACP’s share of global trade. This way, we can leverage on our combined economic strength,’’ Uhuru said.

Members also renewed their commitment to address ravages of climate change, with the bloc setting up an endowment fund to mitigate the crisis.

Uhuru thanked Ghana and Papua New Guinea for their financial pledge to support the kitty and announced that Kenya will be put in $500,000 (Sh50 million).

The summit also endorsed the outcome of the negotiations for a new 20-year ACP-EU partnership, which will be signed next year.

The main aim of the agreement is to reduce and eradicate poverty and promote the integration of ACP States into the global economy.

The first such agreement was signed on June 23, 2000 in Cotonou, Benin – hence the name 'ACP-EU Partnership Agreement' or 'Cotonou Agreement'. It runs for 20 years and will expire in February 2020.

Uhuru said, the expiry of the CPA offers an opportunity to make the partnership fit for purpose in light of today’s challenges in a changing world.

The summit opened on Monday, with business mogul Tony Elumelu urging African, Caribbean and Pacific leaders to improve the business environment in their countries in order to drive industrialisation and wealth creation.

The United Bank for Africa (UBA) chairperson and founder of the Tony Elumelu Foundation said industrialisation would not be achieved without support for small and medium scale enterprises (SMEs) and improved access to electricity.

‘’We cannot hope to industrialise if we do not fix the issue of power. If our entrepreneurs are spending so much of their resources to power their businesses, how are they expected to make the investments necessary to upgrade and industrialise?'' Elumelu said.

He added that ‘‘if we do not tackle these pertinent issues, we will be unable to achieve industrialisation, wealth creation and poverty reduction''.

He highlighted infrastructural development as another critical area needed to achieve sustainable development.

Whilst citing the impact of the flagship Entrepreneurship Programme of the Tony Elumelu Foundation, Elumelu highlighted the critical role partnerships between the private and public sectors, as well as developmental organisations, play in achieving industrialisation.

President Uhuru Kenyatta echoed Elumelu’s sentiments saying his country's private-sector-focused plan has propelled Kenya’s ease of doing business ranking from 129th position out of 190 economies in 2013 to the 56th position in 2019.

"Our young people are tech-savvy and indeed with a huge entrepreneurial spirit. They are ready to embrace the digital revolution,’’ Uhuru said.