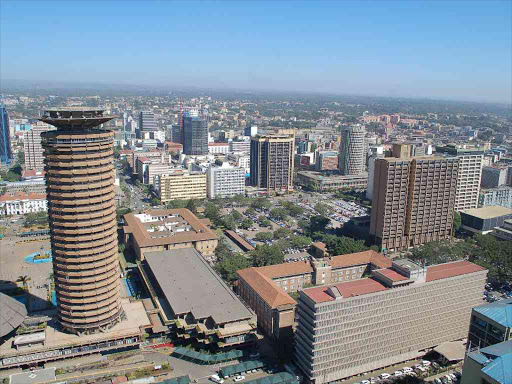 Areal view of the city of Nairobi Photo/KARUGA WA NJUGUNA

The recent survey by

indicates Sub-Saharan Africa will remain the second fastest growing region in the world, after emerging Asia, for the foreseeable future. Private consumption and investment in infrastructure are identified as the key drivers and, to a lesser extent but rising, the services and manufacturing sectors.

The outlook for Kenya at a growth forecast close to seven per cent is among the most attractive investment destinations. In fact, the country is among the 17 SSA economies the IMF has forecast to grow by more than five per cent including Tanzania, Mozambique and Cote d’Ivoire. This is mainly because inflation and exchange rate are relatively well managed, with positive long-term outlook. However, increasing government debt levels and current account deficit are highlighted as key challenges. Incidentally, the risk of growing government debt levels is not confined to Kenya only, but is common to a number of SSA countries as well.

The EY survey defines year 2015 as an inflection point in terms of the structural evolution of most African economies. This means decisions made and actions taken now will determine which countries will consolidate past gains as a platform for sustainable growth in coming decades, and which ones will begin to slide backward.

This is a profound prognosis, and one that many investors concur with.

The five critical success factors of long-term development and economic resilience are identified as governance, diversification, infrastructure, business enablement and human development. These are important, not only for purposes of attracting foreign direct investment, but more significantly for catalysing the increasingly domestic enterprises. Kenya ranks fairly high at position four, behind South Africa, Morocco and Egypt. Key strengths for the country are the strong focus on infrastructure and business enablement.

Kenya, alongside South Africa and Morocco, stands out as one of the three important hubs for investment into the wider Eastern, Southern and Northern Africa sub-regions respectively. The growth of the services sector, in particular ICT and financial services, as well as manufacturing means the economy is fairly well diversified. Inevitably, the country is one of the leading recipients of foreign direct investment, with positive future outlook.

Overall the narrative of “Africa rising” is real and promising. Nonetheless, future prospects will be highly dependent on the decisions and actions of today, and especially those relating to quality of governance. As clearly highlighted by EY, generally speaking, there is a close link between mounting economic pressures and deteriorating governance. Consequently, “the economies that will emerge from the next few years in the best position are likely to be those that strike the right balance between short-term focused macroeconomic management and longer-term focus on infrastructure investment, business enablement, diversification and human development”.

Furthermore, the quality of governance is the key measure of the ability of any government to effectively achieve this delicate balancing act.