Let’s step up efforts in public awareness of diabetes

The disease poses a serious challenge to developing-world healthcare systems 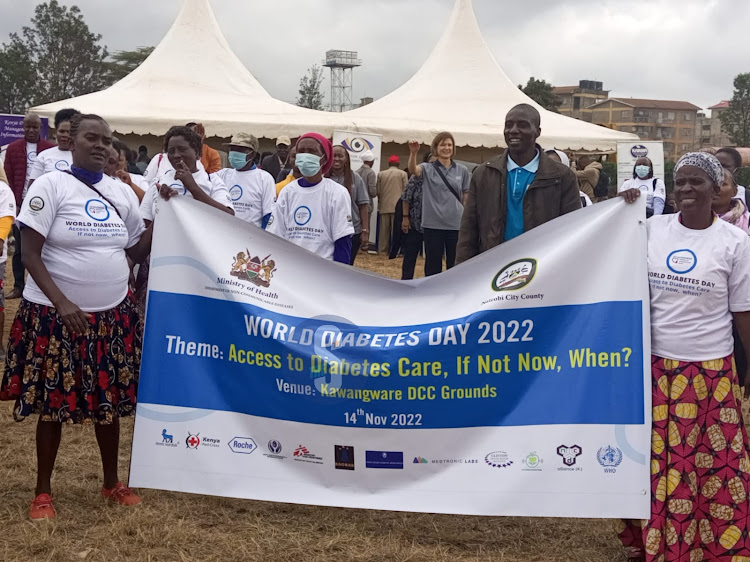 Kenyans who turned-up for free diabetes screening at the DCC grounds in Kawangware on November 14, 2022
Image: MAGDALINE SAYA

Diabetes, a non-communicable lifestyle disease usually associated with the wealthy is quickly becoming a problem in the developing world.

According to the International Diabetes Federation (IDF), developing countries account for three out of every four of the world's 537 million adults with diabetes.

Diabetes poses a serious challenge to developing-world healthcare systems, with the total number of diabetes patients expected to rise to 643 million by 2030.
Treatment is costly. For instance, 552,400 adult cases reported in 2019 resulted in a total economic cost of $372,184,585, equivalent to $674 per diabetes mellitus patient.
The total direct costs accounted for the highest proportion of the overall costs at 61 per cent ($227,980,126), whereas indirect costs accounted for 39 per cent of the total economic costs ($144,204,459).
Medicines accounted for the highest costs over the total economic costs at about 29 per cent, followed by the income lost while seeking care at 19.7 per cent.
Other costs that accounted for more than 10 per cent of the total include productivity losses (19%), diagnostic tests (13%), and travel (12%). The rest of the cost categories accounted for less than five per cent.
According to Kenya's National Strategic Plan for the Control of Noncommunicable Diseases, the diabetes burden was expected at 3.1 per cent of the population in 2019.

The prevalence is expected to rise to 4.4 per cent by 2035 without immediate and effective remediation.

Diabetes is divided into two broad categories: Type 1 and type 2. Both are chronic diseases that affect the way our bodies regulate sugar can lead to serious health complications, they work in very different ways.

Type 1 diabetes is caused by an autoimmune process that attacks insulin-producing pancreatic cells, leading to partial, in most cases, absolute insulin deficiency.

It cannot be prevented due to its unknown cause.

Type 2 diabetes, on the other hand, means that your body's sensitivity to insulin is reduced or unable to produce enough insulin the body demands. This is the most common type of diabetes.

According to IDF statistics, there were an estimated 1.1 million children worldwide with type 1 diabetes in 2019, with the figure rising by 132,000 each year.

This is especially concerning given that the only treatment for type 1 diabetes is a lifelong reliance on insulin, without which survival is unlikely.

According to World Health Organisation's global report on diabetes, excess body fat, as a summary measure of multiple aspects of physical activity and diet, is the most significant risk factor for type 2 diabetes.

Active smoking is also a major risk factor for the disease.

While treatment options for type 2 diabetes include a change in lifestyle, medication and even insulin use, all of these are dependent on the patients' knowledge of diabetes and access to diagnosis and treatment options.

According to the IDF Diabetes Atlas, approximately 54 per cent of Africans with diabetes are undiagnosed.

According to a Stepwise survey conducted in 2015, more than 88 per cent of Kenyans have never had their blood sugar tested, indicating a concerning lack of awareness or access to care.

Given that diabetes is responsible for almost 416,000 deaths in Africa, Kenya leads East Africa in the number of diabetes-related fatalities.

However, there is plenty of room for improvement in diabetes awareness, diagnostic and treatment access.

Effective diabetes control will be critical if we are to slow or even halt the steady rise in diabetes-related complications.

The healthcare system must prioritise increasing public awareness of the disease, as well as its prevention, detection and treatment.

The theme of World Diabetes Day, observed on November 14 each year, was "access to diabetes care" between 2021 and 2023.

This year's emphasis is on increasing access to high-quality diabetes education in order to improve diabetes management and outcomes for people living with the disease.

The National NCD Strategic Plan recognised the importance of advocacy, communication and education in preparing the country for success when dealing with diabetes and other non-communicable diseases.

As part of the response, it suggests strengthening community knowledge and social mobilisation for prevention and control.

The missing link at the moment, however, is an actual investment in these strategic areas.

It is understandable that allocating funds to diabetes response at this time is difficult due to the economic challenges caused by drought, a prolonged pandemic period and a global economic downturn.

This is because it prioritizes enabling diabetes patients to manage the disease and other people to avoid getting it.

When all is said and done, the scourge of diabetes is oblivious to current economic conditions.

There is an urgent need to rethink our approach to diabetes if we are to effectively control, diagnose and treat it for a healthier nation.

The writer is a pediatric endocrinologist at Gertrude's Children’s Hospital

Post a comment
WATCH: The latest videos from the Star
by MENBERE KAHSSAY
Business
09 January 2023 - 04:00
Read The E-Paper