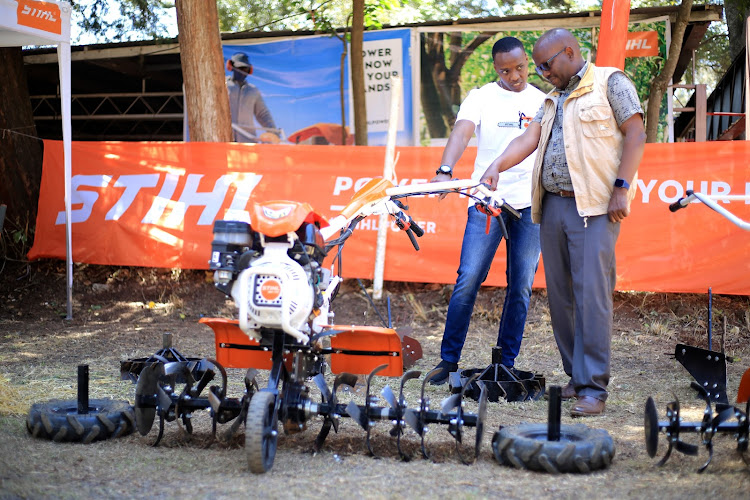 Farmers who opt to use power tillers in land preparation and the subsequent planting and harvesting, could reduce the production costs and boost farm productivity, a new report says.

The report by a German-based company, STIHL, which manufacturers and distributes outdoor power equipment, the machines could spur up agricultural production by almost 50 per cent.

The machine is two-wheeled fitted with rotary tines which help in preparing the soil for; sowing seeds, planting seeds, adding and spraying fertilisers, herbicides and water.

It works in a way that prepares an ideal seedbed for the crop to be planted and turns the soil before planting as well as weeding on crop plantations.

This would help in controlling weeds and promote proper growth of crops.

Its other feature of having a power take-off (PTO), can offer a drive source capable of powering other farm equipment such as a water pump, chaff cutter and hammer mill.

“For small and marginal farmers, a power tiller is the best choice. It replaces animal power more effectively and helps in raising demand for human labour,” the report says.

“It is also capable of performing the operations of different farm implements like rotavator, furrower, ridger, trailer, potato harvester and disc plow.”

The company which set base in the country last month to target East African farmers most especially Kenyan farmers, seeks to target about 60,000 farmers in the region with its new machine.

The machine can be used by farmers with one-to-two acres piece of land which according to the report is the broader base of agricultural producers in Africa.

East Africa is dominated by smallholder production on farms of between 0.2 and 3 hectares.

The tool, therefore, seeks to impact agricultural production through cost saving and improvement in quality and efficiency.

STIHL sets base to enhance access to farming tools

The German based company has invested over $4 million (Sh 479.4) million to scale its market share by  50 per cent.
Business
3 months ago

According to the World Bank, Kenya accounts for 23 percent of all African Agri-tech start-ups in Africa.
Opinion
10 months ago
Post a comment
WATCH: The latest videos from the Star
by ALFRED ONYANGO
Business
30 September 2022 - 18:37
Read The E-Paper